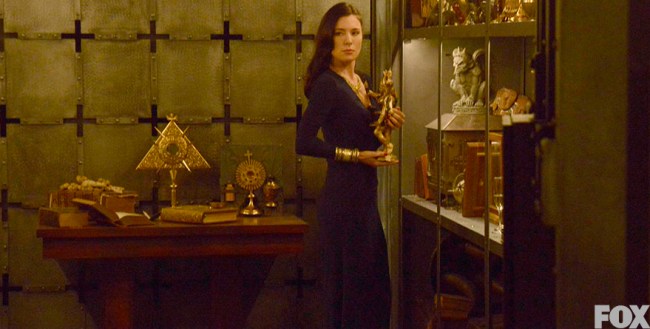 Backstory: The treasure Hunter took in 12-year-old godson, Nick Hawley, after his parents died. She taught him the tricks of the trade. Hawley lived with Carmilla until he was 18. After seeing her kill someone, he took off. Carmilla spent a decade looking for “Nicky.”

Recent Developments: Carmilla shows up with the intent of robbing Theodore Knox’s estate. Theodore is a descendant of Henry Knox (as in Fort Knox) and collects black market antiques and weapons. Carmilla wants Hawley’s help. It is revealed Carmilla is a vetala, an undead being of Hindu lore that serves Kali goddess of death and regeneration. She claims that she tracked Nick to Mumbai, but got caught by a Thuggee death cult and turned into a vetala. According to Carmilla, Knox has an artifact that will make her human again. Once Carmilla gets her hands on the artifact, she double-crosses Hawley, who winds up shirtless and restrained on a table. Carmilla promises they’ll be together in death. Kind of creepy talk from the woman who raised you, but okay, Show. After being freed, Hawley has a chance to kill Carmilla with a flaming torch, but she escapes.

Special Abilities: When in vetala form, her claws secrete a  venom made from sialic and hydrofluoric acid. The venom can burn through anything. Vetalas are lightning-quick, have superhuman strength and are immortal.

Distinguishing Features: She’s sultry and raven-haired in human form, but bears the mark of the vetala on her back.  She can morph into a clawed creature with fangs to rival The Four who Speak as One when in vetala form.

Notable Victims: The name of her victim wasn’t revealed, but it led to Hawley running off.

Famous Last Words: "Tricks will not protect you. I have defeated your spellcaster. She understands my power." Legacy: Solomon sent...