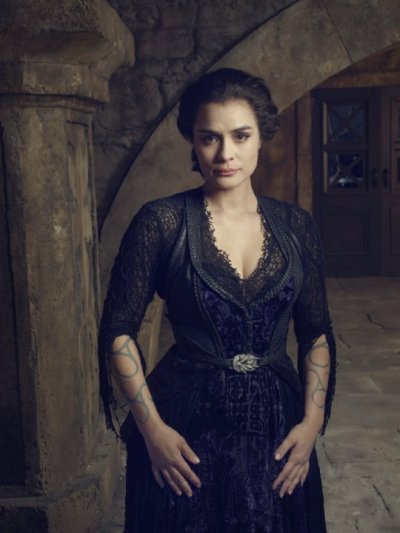 Backstory: According to Greek mythology, Pandora’s box contained the evils of the world when she opened it, things went sideways. Pandora says the box, “is actually more of a dowry.”

Recent Developments: Pandora trapped the Headless Horseman in a box and walked to Sleepy Hollow. She summoned a Yao-guai, the red devils are “Known as battlefield demons. Drawn to the frenzy and energy of armed conflict. Most notably, they have the power to paralyze their victims with fear.” Their eyes turn white before they strike, thus William Prescott’s order: “Don’t fire until you see the whites of their eyes.” Her next minion was the “Whispering Wraith,” who feeds on secrets.

Special Abilities: She can magically change her outfit to fit in with her surroundings.

Given to: a polite and friendly demeanor, talking to herself

Quote: “One for sorrow, two for mirth. Three for a wedding, and four for a birth. Five for silver, six for gold. Seven for a secret… not to be told.”

The Eighteenth-century Oxford history professor enlisted in the Queen’s Royal Regiment to fight the patriots but soon switched sides, becoming...