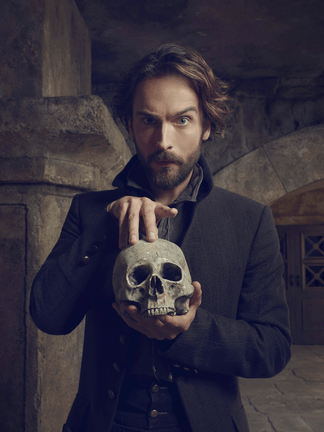 Backstory: The professor of History at Merton College, Oxford enlisted in the Queen’s Royal Regiment to fight the patriots but soon switched sides, becoming a spy for General George Washington. In 1781 on a Hudson Valley battlefield, Ichabod encountered a broadax-brandishing masked man atop a white horse. The man slashed Crane, who ultimately beheaded the Horseman with a sword. Ichabod seemingly died. To save Ichabod’s life, his wife Katrina cast a spell and buried him along with Washington’s Bible. During the battle, Ichabod’s blood merged with the Horseman, linking them. When the Horseman was resurrected, so was Crane.

Can I get a Witness?: The damn sexy hobo  awoke in an underground cave 250 years later and found himself in the modern-day village of Sleepy Hollow, population 144,000. Via a vision, he learned that in addition to being a nurse, Katrina was a benevolent witch trapped in a netherworld. Ichabod discovered Washington’s Bible and references that led him to team up with Lieutenant Abbie Mills in order to defeat the Headless Horseman and prevent the End of Days. It was revealed that Ichabod is the First Witness, one of two prophesied in the Book of Revelation to defend humanity from the forces of hell.

Yes, Sire: Ichabod learned that after his burial, Katrina gave birth to a son, Jeremy, who was named after Ichabod’s grandfather. The baby was delivered by Abbie’s ancestor, Grace Dixon. Seeking answers, Ichabod turned to Sin Eater Henry Parrish to reach Katrina in Purgatory. The missus explained that by saving Ichabod’s life, she’d angered members of her coven With the vengeful witches in pursuit, Katrina gave the child to the Dixons for safekeeping.

Something Wicked, This Way Comes: The demon Moloch appeared to Ichabod in a vision and warned that Crane would deliver Abbie’s soul to him. The beast also posed a brainteaser: “The Saint’s name is a sign. When you know my meaning, War will take form. Then the End of Days begins!” Ichabod discovered secret messages in Washington’s Bible that led him to a map he believed would be a weapon in the war against evil and help free Katrina. With a tip-off from undead Andy Brooks, Abbie warned that Moloch would use the map to bring about the End of Days, Crane destroyed it, then secretly used his eidetic memory to recreate it. 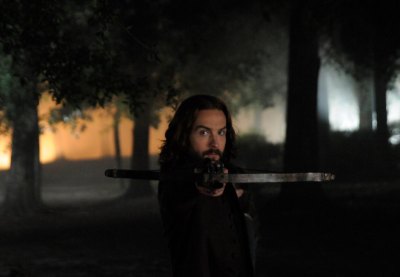 Out of this World: When Henry Parrish told Ichabod and Abbie of a prophetic dream about the Horseman of War and Moloch’s plan to give rise to the Apocalypse that day, the partners used the recreated map to reach Katrina in Purgatory. Henry urged the two not to forget each other once they entered the world between worlds. In a gift to Ichabbie shippers, Ichabod took Abbie’s hand as they walked into the netherworld. In Purgatory, Ichabod saw a fraudulent vision of his father (Victor Garber) welcoming him home as a war hero for helping the British win the Revolutionary War. Ichabod had glimpses of Abbie, figured out that he was in a dream and escaped. Ichabod found Abbie and they trekked through a nightmarish landscape until they located Katrina. After all that, Mrs. Crane disclosed that no soul can depart without either being granted forgiveness or having another soul take its place. When Abbie insisted on being the one to make the sacrifice, Ichabod embraced his partner murmuring that he’d return to her. His wife was still in the room, so the whole thing was a bit awkward.

Well, that Backfired: When the Cranes exited Purgatory, they arrived in modern-day Sleepy Hollow where their supposed ally Henry Parrish was waiting for them. After Katrina led them to the four white trees associated with Moloch, Henry bound them to the trees and revealed that utilizing Washington’s map had boomeranged. Henry had used the Cranes’ faith that they could be reunited against them, thus separating the two Witnesses, which enabled him to break the Second Seal. Parrish was just warming up; he dropped the bombshell that he was also the Horseman of War and—waaaait for it— the Cranes’ extremely bitter presumed-dead son Jeremy Crane. Henry gave his mother to the Headless Horseman, bound Ichabod in a grave and broke the seal.

Return Trip: After escaping the pine box, Ichabod was good to his word and quickly found a special key that allowed him to go back to Purgatory and bring Abbie home so she wouldn’t have to wait around as long as poor Katrina did…. Ichabod later attempted to rescue Katrina from the Horseman, but she opted to stay on as a spy. This became a pattern. Ichabod wasn’t happy to hear that his wife and her former fiancé seemed chummy, but the Cranes worked on their marriage. Given the chance to kill his parents, Henry had a change of heart and took out Moloch.

The Task at Hand: Ichabod’s focus on Katrina resulted in him spending less time focused on his Witness duties but he eventually got his head in the game. 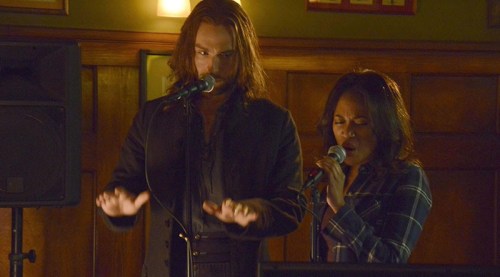 Out of Time: Katrina t turned into a major, um, witch. When she crossed over to the dark side and partnered with Henry, the marriage was doomed. Crane gave Abbie his consent to gun down Henry. Kat performed a spell to return to 1781 in order to kill Ichabod but was foiled. With the spell reversed, she wound up back in the present day and attempted to off Abbie. During the ensuing tussle, Ichabod shivved his wife with her own knife. He left town for nine months and lost touch with Abbie, but eventually returned and was duly contrite.

Quotes:  “First I shot him. But he rose back up. Beheading him seemed the next logical step.”

“Our fates are entwined now.”

The young police lieutenant was a week away from going to the FBI Academy. During a routine call to Fox...