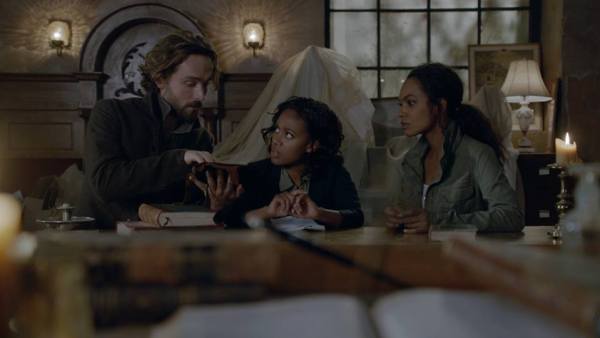 The long national nightmare is over; Sleepy Hollow Season 3 is back and off to an encouraging start. The new showrunner, Clifton Campbell, knows what Sleepyheads endured and is righting wrongs. In the second season, heroine Abbie Mills got treated like a sidekick, hero Ichabod Crane was portrayed as a chump and tertiary characters were given the spotlight. The Season 3 premiere, written by Albert Kim, and directed by actor Peter Weller, delivered a lot of what fans championed.

Abbie has been able to focus on her own life and achieved her goal of going to Quantico. She gets to shoot at the bad guys and not just mystical creatures who are impervious to bullets. Little Annie Oakley loves to whip out that pistol, does she not? The set designers get an air-kiss for giving Agent Mills a spacious and well-appointed new office, which includes a little sofa, so we know she’s not living out of her car. Now that Sleepy Hollow is a hotbed of organized crime, Abbie has things to do. She never wanted to contend with paranormal evil-doers and only did it out of a sense of duty. 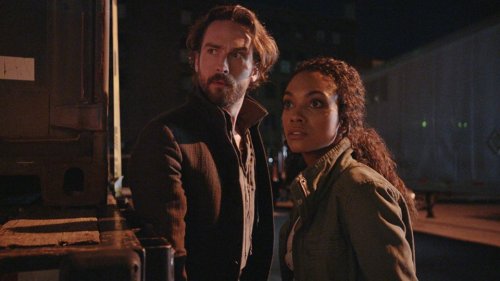 Ichabod, who is duly contrite for Season 2 missteps, needs this paranormal world, it’s the only thing that he can be confident about in the 21st century. Jenny Mills, Abbie’s sister, needs it, too. She loves this stuff and trained for it. It’s heartwarming to see Jenny’s friendship with Ichabod deepen because they do relate to each other, and he deeply admires his  “Miss Jenny.” The hugs still freak him out a little bit because that’s not how he rolled in 1781. (“Is this level of intimacy commonplace in 2015?”)  He does, ahem, embrace having tiny Abbie squeeze him within an inch of his life and he is not shy about murmuring in her ear, regardless of who is watching.

The new female characters, Pandora and Betsy Ross can do something other than speak above a whisper and get tied to the railroad tracks, so that’s an upgrade. (Miss Ross is every bit as forward as Crane said she was.) Bonus points to Pandora for knowing how to magically change her outfit; she laughs in the face of amateur-night floating flowers.

The writers delivered winks and nods to the past: Abbie rescued Ichabod from confinement, as she did in the pilot when she got him released from St. Gregory’s. Jenny picked up a photo of herself with Sheriff Corbin—awww! C-Dawg and the Mills sisters visited the abandoned archives.

There was just enough exposition for new audience members—I’m looking at you Twilight fans. Next week, we get Lance Gross, who will bring in the House of Payne crowd. Okay, maybe it’s not the same audience, but he’s cute and his character, Daniel Reynolds, will surely drive Ichabod into a flailing-finger frenzy. Did you catch how Crane couldn’t even let C. Thomas Howell breathe the same air as Abbie without side-eye? Come to think of it, where was Ichabod when Luke Morales disappeared? Not trying to suggest that Crane accidentally killed him with a crossbow or anything, but…. Okay, that is enough analysis, let’s go!

Ichabod: It was only then that I gleaned what they meant by ‘return to your upright and locked position.’
Abbie: Crane on a plane! I miss everything.

The O.G. Original made his triumphant return. That’s right, the Horseman of Death is back, baby! It went like this:

Pandora: Hi. What are you doing here?

After Pandora puts poor Headless in cold storage, she summons a creepy red demon. Cut to a thug in an alley, he is no match for Agent Doe Eyes. It goes like this:

The Audience: Abbie!!!!! OMG, yes, yes, yes. We missed you!!!! Look at you wielding that metal garbage can lid like Captain America!

Abbie is a great agent, she has a confidential informant and everything. C. Thomas Howell, her boss, is gruff with her, but gives her a little smile when her back is turned because anyone who doesn’t find Abbie Mills endearing is clearly a simpleton. Don’t get attached, to C. Thomas Howell, you know Abbie’s superiors tend to take early retirement. 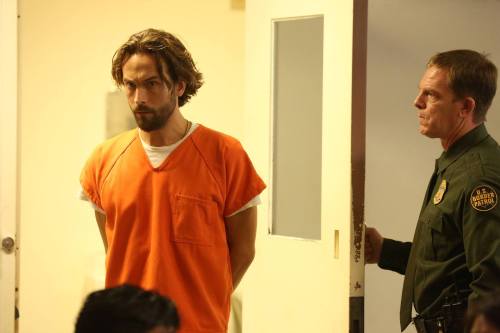 Abbie is summoned to the Immigration and Customs Detention Center where she is reunited with her damn sexy hobo, who is now a damn sexy inmate in an orange jumpsuit. He is a damn sexy hobo inmate, and he looks contrite.

Abbie: Hi. I hear you tried to “enter the country with restricted materials.” Also, I haven’t heard from you in nine months.

Ichabod:  I did shiv my first wife, so I needed some time alone.

Abbie: Point taken, but how did they let you walk in here with jewelry? Secondly, why are you even holding on to that woman’s necklace?

Ichabod: Exposition. Blah, blah, something about the Horseman. It sets up a delightful bit with my cellmate Jesus. I say his name like “Jee-zus,” but it’s really “Hay-zus.” He calls me “C-Dawg.”

The Audience: Thank you, Jesus.

Abbie: What did you try to smuggle in?

Ichabod: Our fates are entwined.

Ichabod: Never mind, I went to Scotland, looking for an excuse to team up with you again, so I “discovered” some tablet.

I call monkeyshines. Ichabod knows good and well he learned to chisel at the Learning Annex so he could reestablish Team Witness.

Abbie’s Thoughts: Uh, you can afford airfare? You still owe me for the cappuccino, bottled water, donut holes, Post-it notes, cable bill, gas and electric. There is a theme restaurant, Colonial Times, and you are applying for a job manning the salad station. Or you sell that cursed necklace. It is more than 200 years old, learn how to use eBay.

Abbie: You got a haircut. It’s just like mine, which is weird since we haven’t seen each other and I moved on with my life.

Did you see that? Abbie just touched his hair. There was hair-touching, that’s like foreplay, right?

Moving on. Stuff happens with one of Pandora’s monsters, and it all ends up with our first hug of the season, which is the most important development. This whole recap should have been: “Ichabbie hug. The end.” Afterward, Ichabod presents this stone tablet, which he purchased at Hobby Lobby. An extra plays along with his bogus story. It goes like this:

Ichabbie-approved Extra: Hey, the figures engraved on this stone look like you two.

Cliffhanger: Pandora and Abbie strike up a conversation at a bar and Pandora is giving Ichabod the eye. She’s a shady one.

We love your witty observations. Comments don’t appear right away, but we promise we’ll get to them.

Ichabod is so grateful to be with his Leftenant and Miss Jenny in the archives. He missed his musty books...