Will Fear the Walking Dead live up to the chills, thrills and emotional punch of its AMC big brother, The Walking Dead? TWD fan and Special Contributor, Tracey M. takes a look at the pilot episode and shares her thoughts on the apocalyptic prequel. Check it out and decide if you want to walk on. – David F. 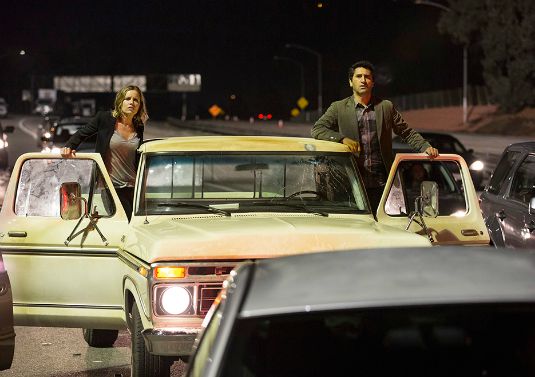 As a loyal fan of AMC’s The Walking Dead, I was hesitant to form bonds with the new characters of Fear the Walking Dead. I have cried, screamed, cheered and jumped out of my seat like a holy roller watching the trials and tribulations of my Walking Dead compadres. Will I be able to invest myself in this new group? Hmmm. Fear the Walking Dead is set on the West Coast; at the beginning of the apocalypse, while TWD’s Deputy Rick Grimes (Andrew Lincoln) is in a coma. That’s intriguing, it’s a chance to see how it all started and maybe some answers. I’m willing to try a bi-coastal experience and give these new characters a chance. Let’s meet them and see how they roll on the West Coast!

Our first character is a young heroin addict named Nick Clark (Frank Dillane). Nick awakens in the abandoned LA church where he and his friend Gloria (Lexi Johnson) get high. Gloria is no longer beside him, so he dresses and searches the church, calling her name. Groggy, Nick wanders downstairs; maybe Gloria is there. He comes upon a corpse missing a huge chunk of its neck. In the next room, he spots Gloria’s small frame, but is horrified to see that she’s bent over a corpse and eating the flesh from its face. Nick calls her name again. Gloria turns to him and heads in his direction with a knife protruding from her ribcage. Scared out of his wits, Nick bolts out of a ground-floor window. He runs into the street in a panic, and is struck by a car.

The next time we see Nick, he’s been hospitalized and restrained. He was brought in by the police, raving about seeing flesh, blood and viscera. At that point, I think I might be raving, too.

Back at home, Nick’s mother Madison (Kim Dickens) and her boyfriend, Travis Manawa (Cliff Curtis) receive a call from the hospital. Nick has been found and the police are questioning him now. They rush to the hospital with Nick’s sister, Alicia (Alycia Debnam-Carey). Once at the hospital, Maddie throws the cops out to protect her son. She’s relieved that he is alive and still harbors hope that he’ll get better, but Alicia sees him as a broken promise. Travis, an English teacher, volunteers to stay with Nick for the day, and Maddie and Alicia head to school. Nick still can’t wrap his mind around what he saw. He thinks he might be crazy.

At the school, students file through a metal detector into the building. A young man named Tobias (Lincoln A. Castellanos), a quiet, self-conscious computer geek, sets off the alarm with the knife in his pocket. Maddie, the school’s guidance counselor, takes him into her office where Tobias tells her he really needs his knife; he’s seen stories online about a spreading virus and claims there is no future for anyone. Maddie locks his knife away, and advises him to spend less time online. Art Costa (Scott Lawrence), the school principal, advises Maddie that a lot students are out sick, so she’d better get her flu shot. As if. Meanwhile, Alicia has skipped class to spend some time with her boyfriend Matt (Maestro Harrell) and escape the reality of her life for a while. He suggests they spend the afternoon at Venice beach for respite.

Nick keeps waking from nightmares. He swears what he saw was real, not a drug-induced hallucination. Travis can’t seem to shake Nick’s claims, so that evening he decides to take a ride and see for himself. Of course it’s dark, and he must use a flashlight. There is blood everywhere. Travis calls out, “Is there anybody here?” He opens a door, and a junkie jumps out screaming “Don’t kill me, don’t kill me!” (how ironic), and then he is gone. Travis slips in a pool of maggot infested blood, then quickly exits the church.

Maddie spends the night at the hospital with Nick, and is awakened by Travis’ kiss. It’s an hour before the first bell, and he’s brought her a change of clothes. Travis tells Maddie what he saw at the “shooting gallery”.

During rounds, Nick has convinced his nurse to remove one restraint so he can use the bedpan in private. While the patient in the next bed goes Code Blue, Nick uses the opportunity to get out of the hospital. He needs to find his dealer, Calvin (Keith Powers) and ask him if the heroin was laced with something.

When Maddie and Travis arrive at the hospital and realize Nick is gone, Maddie agrees to go with Travis to the church. They head inside, and though the church is deserted, Maddie sees the blood. She finds Nick’s bedding as well as his “works”, and cries for her son. She decides to pay a visit to Calvin, maybe he’s seen Nick. Maddie tells Calvin that Nick was in an accident and was picked up by the police and brought to the hospital. Calvin offers to make a few calls to no avail. Maddie and Travis leave Calvin’s. On their way home, they run into a traffic jam. There are helicopters overhead and they get out of their truck to see what’s happening. They hear four gunshots, and decide to detour off the highway.

Free from the hospital, Nick is desperately trying to get in touch with Calvin, while Alicia is waiting at the beach for Matt. She texts him over and over with no response. After a long wait, Alicia heads home.

The next day, even fewer students show up for school. When Maddie and Travis show up, the staff is watching video footage from the traffic jam the previous night. There’s a man on the ground, presumably dead, who suddenly reaches up and grabs an officer and tries to bite him. He gets to his feet, and is hit with four gunshots to the torso. Unfazed, he continues forward until he is shot in the head. Alicia and her classmates are watching the video on their phones; Alicia still trying to reach Matt. It is announced that the school has declared a half day, and all the students are sent home. Maddie spots Tobias on one of the school buses, and the two lock eyes.

Nick has finally gotten in touch with Calvin. They meet at a diner, and Nick asks him point blank if the drugs were laced. Calvin is angry that Nick is questioning the purity of his product and more upset that Maddie and Travis showed up at his parents’ home. Nick tearfully swears to Calvin that he would never betray his confidence. Calvin offers to “fix him up” and they take a ride to a deserted area under a bridge. They drive through a long tunnel. As they step out of the car, Nick notices a gun at Calvin’s side. He decides he wants to survive and wrestles with Calvin until the gun goes off. Calvin is mortally wounded and Nick frantically runs off, not knowing what to do. He calls his mother and Travis and takes them to see Calvin’s body. When they arrive, there’s no sign of Calvin. His car is there, as well as his gun. Nick is crying, confused and questioning his sanity. He leans on his mom and they get back into the truck.

As Travis backs the truck through the tunnel, they spot Calvin behind them. Maddie and Travis get out to help Calvin as Nick is screaming for them to stay away from him. Calvin tries to attack Maddie and Travis helps fight him off. Nick, still in the truck, puts it in reverse and runs over Calvin. Unbelievably, Calvin stands and heads toward the truck again. Nick puts it in drive and floors it, sending Calvin flying. The three emerge from the tunnel to investigate. As they approach the broken body, Calvin turns what’s left of his head, and stares at them.

When facing a hostile new environment, there are those who adjust and thrive and those who give in to their baser natures. I know where this road leads, and am a willing passenger on this new adventure.

Fear the Walking Dead airs on AMC Sundays at 9/8c