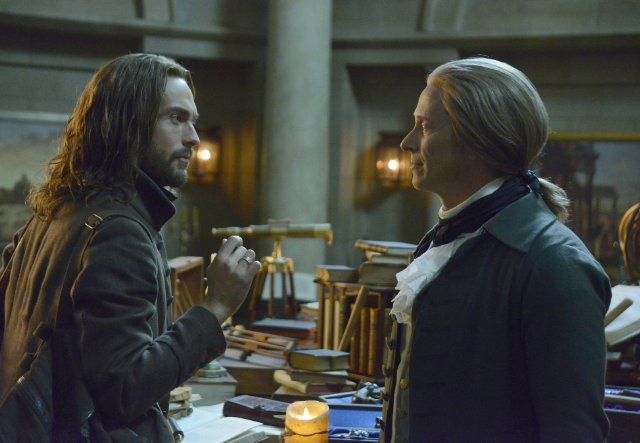 Theme: Don’t be a simpleton and poke around in a dark and creepy place unless you are part of Team Witness; the Witnesses may be simpletons when it comes to seeing the forest for the trees.

Abbie and Ichabod are back on track. They are working as a team and communicating again. Katrina is making herself scarce, so Abbie isn’t in a state of agitation. Now it’s Ichabod’s turn to be annoyed by a third party. Calvin Riggs arrives and Ichabod’s finger is ready to flail in the air like it just don’t care. Thomas Jefferson pops up and everyone sidesteps the elephant in the room. It’s a pretty big elephant, Show, but okay.

Abbie: We just blew up the author of the Declaration of Independence.
Ichabod: Truth be told, he insisted. 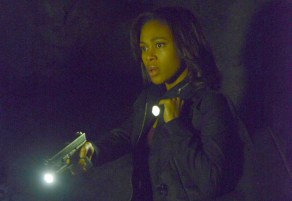 Be Afraid of the Dark: Okay these simpletons in hard hats are going to die. That’s what happens when extras poke around a dark and creepy place during the opening sequence. In a surprise to no one, Reavers drag them into tunnels. At the scene, Abbie meets a Pulitzer-winning journalist Calvin Riggs. Hey look, Irving isn’t the only black man in town! (I didn’t want to be the one to say anything.) Calvin’s brother is Daniel, one of the simpletons who poked around a dark and creepy place during the opening sequence. Riggs has tons of the kind of questions any investigative journalist would ask. Abbie really doesn’t have time for his yammering about propaganda so she promises to keep him posted and goes about her business.

Picture This: Crane and Lieutenant Mills search the tunnel. Ichabod fanboys because there is an underground chamber which is obviously the handiwork of Thomas Jefferson. Of course Ichabod knows every Founding Father, Jefferson was his mentor and inspiration until Jefferson “unfriended” Ichabod. That’s what comes from too many Candy Crush invites, word to the wise. The chamber, which is named Fenestella, contains valuable secrets and is protected by the gruesome Reavers. The Witnesses return to the tunnel and find that the nosy simpletons are still alive. There are more Reavers than Ichabod and Abbie counted on, so they scramble out of the hole. As one of the Reavers emerges, it’s repelled by a flashing light. Oh, look who’s here, it’s Calvin and the flash of his camera deterred the Reavers.

A-hole: Crane, who almost got his behind handed to him by a Reaver, doesn’t want Calvin’s help. He prefers to be the only man on Team Witness, did you notice that? Well, except for Captain Irving, but he certainly gets huffy with new men who dare strike up a conversation with his Leftenant. He was immediately grumpy about Hawley and Orion (who did turn out to be a loon, so he was right about that one). Ichabod’s finger comes to life and he starts wildly jabbing it in the air. No time to argue, the Reavers haven’t eaten in a while and the simpletons look tasty. In the name of Witnessing, Ichabod comes up with an idea that involves tossing Calvin’s $7,000 camera down the hole. Ichabod has no idea how money works. Or maybe, he’s just being a jackass because he’s completely in love with Abbie. This expensive diversion gives Crane and Lieutenant Mills time to get to the chamber.

Chamber of Secrets: Hey, look who it is, you guys! A hologram of Thomas Jefferson is just strolling around. I keep waiting for an uncomfortable reference. Abbie doesn’t say anything and Ichabod is too busy with an elaborate bow. Who knows if Jefferson’s hologram knows that history has given him some side-eye. The chamber houses vital secrets to help Ichabbie in their mission. That whole unfriending thing was to protect Ichabod because he couldn’t know about his destiny until the Second Witness showed up. 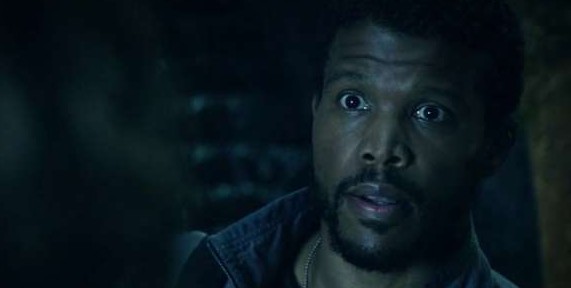 A Simple Plan: Ichabod thinks saving the simpletons is more important than the secrets and the only way to do that is to cause an explosion that will blow up the chamber. It seems to me that the info in the chamber is more important than the simpletons, Crane thinks they can find whatever they need on the Internet. Sigh. In fairness to Ichabod, he also fears that because the area is more populated than in Jefferson’s time, the Reavers could cause harm to others. (Meh, the Reavers have been there for centuries. If they do emerge, why can’t the duo kill them like they’ve killed other creatures?) The explosion ensues and simpletons are rescued. Nice going, now if there is another Apocalypse, the information will be lost because Team Witness couldn’t see the forest for the trees. Needing a cover story, Abbie tells Calvin that his brother may have had hallucinations.  As they share a tender farewell, there are hints that Calvin may be sticking around. He wants to dig into what’s going on in the town. Abbie gently suggests that he not get involved. He tells her to check her email. She does and finds that he captured a photo of her and sent a message, “Trust me: I never reveal my sources.” Calvin had time to get all flirty during a crisis? Shouldn’t he have been at Daniel’s side?

Money to Burn: Jenny is rocking her sexy off-duty look as she sits alone at a bar. Jenny spends a bit of time rocking her sexy off-duty look as she sits alone at a bar, doesn’t she? Irving shows up and asks for her help retrieving his wedding ring and other personal items from the police evidence room. Despite his exoneration, his former colleagues hold a grudge over that double homicide thing and have been deliberately dragging their feet. Jenny agrees after she spots an evil mark on Frank’s arm. We can tell the marking is evil because of ominous music. After helping Frank break into the evidence locker, Jenny goes all Sarah Connor on him and pulls out her gun, she wants answers. Jenny does not fool around. Neither does Frank, he shoves her and runs off. You better run! When things calm down, Irving says his soul is tarnished. Katrina was fooled into declaring his soul clean because of a rune he found in one of Henry’s books. Bottom Line: Frank’s snooping uncovered details about Hellfire Club offshore accounts. Frank wants “reparations” so Cyntha and Macey have enough money to get far away from Sleepy Hollow. The rune’s power is fading and he wants to set them up before he’s consumed by evil. Maybe he should just figure out a way to shave some fractions of pennies off those transactions and head off to a nice island?

Cliffhanger: Katrina wakes to find Henry staring at her. He says he was away sorting things out and that he killed Moloch so they can begin their work. He presses a rose into his mother’s hand and it draws blood. Psych! It was just a dream, except that her hands are still bleeding and there are dried roses on the table. I’m sensing that the Crane marriage is doomed.

Moloch is dead, Henry has quit his job as the Horseman of War and the Apocalypse has been averted, what...