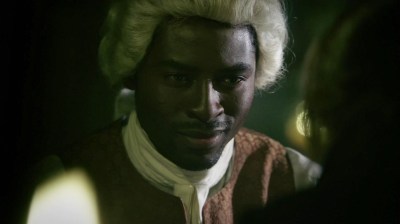 Backstory: When he was still fighting for the British, Ichabod Crane met Bernard, a free slave. Colonel Tarleton suspected Bernard of treason because he believed that Arthur was behind a pamphlet advocating American rebellion, under the pseudonym, Cicero. Despite an attempt from Quaker nurse Katrina Van Tassel, to intervene, Ichabod followed his commander’s orders to interrogate the prisoner, which took days. Bernard warned Ichabod: “There are demons all around.” Though Ichabod was ordered to kill Bernard, he took him to the woods and let him escape. When Ichabod asked if Bernard was, indeed, Cicero, he cryptically responded: “He is all of us.” As he was set free, Arthur urged Ichabod to find Katrina, who would guide him to George Washington. Ichabod remembered the code words to speak to Katrina: “Ordo Ab Chao. Order from chaos.” Tarleton arrived, shot Bernard and Ichabod saw his commander’s demon form.

Present Day: Ichabod remained haunted by Arthur’s death. Henry Parrish, the Sin Eater told Crane that as long as he carried sin in his heart, the Horseman would feed on his regret and fuel their blood tie. Parrish enabled Ichabod to have a vision of Bernard who assured that his death had saved Crane’s soul and that only Ichabod had seen it as a sin when, in fact, it had been Crane’s salvation.

Famous Last Words: “I will find you again, my friend.”

Mary Wells (Heather Lind) First Appearance: "The Weeping Lady" Backstory: Ichabod was promised to Mary when they were children in England....