Rutledge and The Freemasons Bio 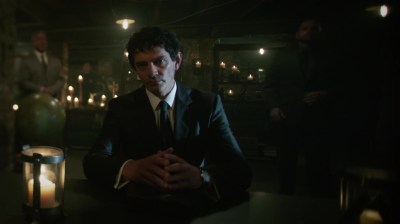 Backstory: Ichabod Crane was a member of the Freemasons, who guarded secrets and artifacts for the side of good. They were in league with Crane’s wife, Katrina until she cast the life-saving spell on Ichabod and secreted him away.

Recent Developments: The Masons drugged and kidnapped Ichabod and explained that because of his blood tie to the Horseman, they wanted Ichabod to sacrifice his life as to also kill the Horseman and prevent the Apocalypse. They supplied a poisoned drink for him to commit suicide. With the help of Henry Parrish, the Sin Eater, Ichabod’s blood connection to the Horseman was severed, giving him power to fight the Horseman. Four of the Masons were ultimately beheaded by the Horseman, who hung their heads as lanterns.

Prominent Member: Rutledge (James Frain), was a descendant of Edward Rutledge, the youngest signatory of the Declaration of Independence.

Distinguishing characteristics: Dark suits. rings featuring an inverted square and compass,
Rutledge wore cufflinks with the initials J.R. and had callouses indicating that he worked with his hands.

Philanthropist, author, socialite. Her lineage goes back to the Founding Fathers. She is a descendant of Lachlan Fredericks.