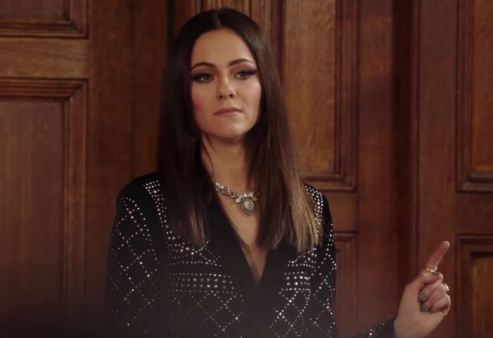 It’s a tense couple of hours for the Royals leading up to the decision from the privy council. Through a series of flashbacks we see how each family member is dealing with the decision hanging above their heads. So what will the council decide? Will Cyrus remain the King of England, or  will Robert, the rightful ruler, will take back his birthright?

Flashbacks: After weeks of being apart, Eleanor and Jasper finally come face to face. She wants to know where he was these past few weeks and, of course, Jasper won’t say in order to protect her. Obviously still torn up about the entire breakup, Len tells Rosie she can shoot Jasper if need be as long as she shoots him in his heart since he broke hers. Tears.

Even though Hill is head of security for the royal family, there is someone higher than him. They have discovered a file was leaked from Hill’s computer and they threaten to fire him. Apparently the file was the one Jasper took on Brandon Boone aka the guy who tried to kill Robert. Boone is also the same guy Jasper turned over to the reporter in exchange for her to bury the story about Len.

Jasper not wanting Hill to lose his job comes clean to the authorities and is arrested for the security breach. As the cuffs are hitting Jasper’s wrists, Robert storms in and says Jasper was working for him and a breach never happened. I’m surprised that Robert did something good for someone else.

Even though he’s now free, Hill still fires Jasper. Dejected, Jasper goes to thank Robert for helping him. Turns out Robert didn’t help Jasper because he is a good person, he helped him for his own benefit. Robert tells Jasper when he becomes King, Jasper will be hired as his personal detail. Robert claims he only wants the best security. But does he just want to keep Jasper away from Len? Keep your friends close, but your enemies closer.

In the Present: It is finally time for the privy council to hear the sides of the royal family before casting their vote for the next king. They must choose the next king by midnight.

During Cyrus’ plea, he paints himself a great and loving king. Pardon me as I laugh out loud. Cyrus also makes a joke on behalf of America and its recent presidential election. Cool.

Helena’s plea points to the fact that if Robert’s plane did not crash, he would already be king. Cyrus is king because of an unfortunate technicality, she says.

Liam, on the other hand, has an opportunity to speak on behalf of his brother and merely defers to the wisdom of the council. He’s still bitter about losing the throne. Angry with Liam’s laissez faire attitude, Len stands up and says of her uncle, ‘the man has a mohawk! She continues to point out a few questionable things Cyrus has done like knighting a prostitute and basically ‘dressing like a court jester high on nitrous oxide.’ Len holds nothing back.

Robert finishes off the speeches saying he wants to focus on England and not who the next king will be because the country is about the people and not one person. Everyone opposing Robert looks scared because this moving speech just won Robert the crown.

After the council adjourns for the night, Robert goes after Liam asking why he didn’t say anything on his behalf. Liam said he did what he needed to be done to save the family and the crown. Still pissed, Robert tells Liam that, “crowns are for taking and I am taking this one, that is unless you screwed this up for all of us.” Burn.

Pissed beyond belief, Cyrus finds Wescott, the head of the council, and goes off about how he could have lost the council. Wescott looks Cyrus in the eye and says, ‘we saw a king today and it wasn’t you.’ Double burn.

Both dejected from the day, Jasper and Liam meet in the tunnels to discuss what will happen next. As Jasper tells Liam he will soon be working for Robert, he cuts him off because he wants to know all about Boone and Robert’s connection. Jasper says once he tells him there is no going back. Liam responds with “there’s no place to go back to.”

The season finale is next and boy will it be a doozy.

Royals Recap: “In The Same Figure, Like The King That’s Dead”

Robert and Liam go to Helena together to say that Liam should be put forward as the next king. She...