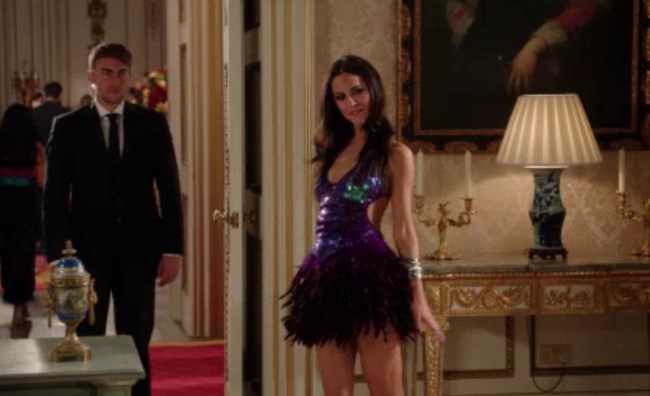 Princess Eleanor is still g  cl submitting to blackmail sex with her bodyguard, Jasper, who claims that he’s an American grifter from Nevada. He says something about her “panic button.” I don’t know what that means. Where is Queen Liz Hurley to say something crass? Oh, here she is, the Queen is busy worrying about her son’s sex life again. She says, “I smell supermodel on you.” I hope it’s Naomi Campbell, she’s done with Hakeem and I’d like to see her hit one of these people with a phone.

Uh-oh, remember how Queen Liz Hurley chastised Eleanor for publicly displaying her naughty bits, which ended up making headlines? Now Princess Eleanor has retaliated by planting an embarrassing tabloid piece about how much money her mum spends on lingerie. The Queen and Eleanor trade Yo Mamma jokes. How do they settle things? It’s a Fashion Week event and they will duel it out with competing shows. IRL, I always love seeing Queen Elizabeth stomp on the catwalk.

Ophelia is chased through the curiously empty streets of London by paparazzi. They should offer her coffee, that will slow her down. She has a meet-cute with some guy named Nick, who helps her escape on his motorcycle. They meet again and flee the press some more. Nick reveals that he Googled her and knows that she’s an American coffee addict dating the prince. Wrong, she tells him she was just raised in America and drinks chai and she’s just “hanging out” with the prince. I guess I should stop calling her Coffee Girl, she’s Chai Girl.

So Ophelia’s father is the King’s head of security, right? How come nobody watches her and protects her from the paps? To be fair, there are only two bodyguards, Marcus, the one who bodysurfed with Liam and Jasper who guards Eleanor’s body by being on top of it. In any case, Nick later sends Ophelia a gift, one of those funny Groucho Marx masks. She puts it on and sends him a selfie.

Price Liam doesn’t know about any of this because he is wearing a suit and getting King 101 lessons from his dad, despite the fact that King Liz Hurley’s Husband threatens to abolish the monarchy. Liam is sexting some blonde. Who dat? She does not look like Gemma. I don’t know what that’s about it. King Liz Hurley’s Husband brings the prince along to meet a visiting foreign dignitary who is a caricature of a foreigner. It deserves royal side-eye.

Jasper wanders about the palace as bodyguards do. The Queen summons him and orders him to do a tongue twister. Oh, get your minds out of the gutter pervs. She wants him to say something like “She sells seashells by the seashore.”  She can tell that he’s a big faker with a phony accent and says “I’ll be watching you bodyguard.” I bet she will. In addition to being a blackmailing bodyguard, Jasper is also a chauffeur. As he drives Eleanor around, she asks about his identity again. She believes he’s not from Nevada and suspects that he may be — an orphan from Cambridge? At least he gets to drive, Liam’s bodyguard Marcus is sitting in the backseat because Gemma wants to be behind the wheel during this random royal caravan.  She thinks Liam looks hot so she unbuckles her seatbelt and puts her face on his lap so she can enjoy the … royal scepter. The car plows into a phone booth and Gemma ends up bloodied. Liam wants to stay with her, but the bodyguards enforce “extraction protocol.” That means that Jasper drives up, punches out Liam and removes him from the car. It turns out that Gemma is just a little banged up, so it’s not a scandal.

Obviously, those wretched redhead girls make an appearance for “comic relief.” This involves them assuming the position so that estheticians can wax their bums. Their father, Prince Cyrus, walks in and makes a remark about butt plugs. Later on, when he’s in bed with his lover, there’s a reference to him having also visited the esthetician for bleaching. He does not mean his hair. It’s very unseemly. Google it.

The fashion shows take place, the Queen’s is classic, Eleanor’s is edgy with all kinds of black lights. Tim Gunn shows up to declare Eleanor the winner! She receives $100,000 to start her own collection and a featured spread in Elle magazine.

Later as the princess is proudly clipping all the positive news stories, Queen Liz Hurley shows  up to say she planted the stories to help her daughter’s image. After her mum leaves, a deflated Eleanor lights up a joint and starts to have one of her tantrums. Jasper overheard the conversation and tells the princess that it’s not true, she succeeded on her own. By the way, he’s cagey about whether he is an American grifter or an orphan. He admits to lying about something, but says the Queen lies about everything. His comforting words don’t work, Eleanor dramatically burns her flattering press clippings.

Liam sees Ophelia and they chat about how busy they both are. He stares longingly in her eyes and says he doesn’t want to make “small talk.” He confesses that he was in the car accident with Gemma and he’s ashamed. Seeing as she can’t even enjoy Starbucks with the prince without it turning into a media frenzy, she wants to know how come his name wasn’t in the press and he tells her about “royal extraction.” She doesn’t approve, there are tortured lingering gazes and then he leaves.

Liam later talks to Prince Cyrus, who offends his nephew by saying they are similar: spare heirs who do shitty things like leave bloodied girls after stranded after a car accident. Cyrus doesn’t say that he’s plotting to kill off the other royals so that he can ascend to the throne, but you know he’s thinking it. Team Cyrus!

Prince Liam's ex-girlfriend shows up, Queen Helena's got a man on the side and Princess Eleanor is still being blackmailed...