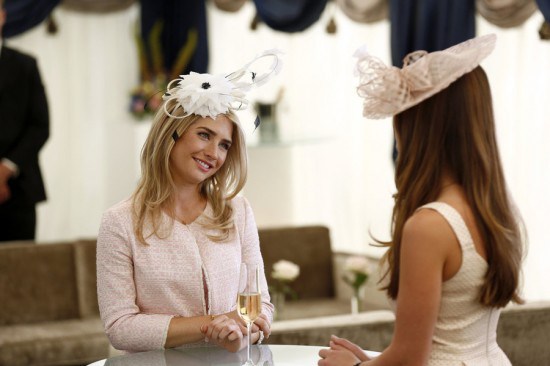 Princess Eleanor won’t take blackmail lying down. Well, she kinda will. She and bodyguard Jasper have been rolling around between the sheets. Aside from a half-hearted effort to get his phone and delete the sex video, she doesn’t seem that troubled. Besides, he’s backed it up on a hard drive. Where is Queen Liz Hurley to make a pun about hardness? Oh, wait, here she is! Jasper hides while Queen Liz Hurley barges in with two of her aides to say, “Someone’s been beavering about.” The princess tends to drink and Tweet, so her account is now being hijacked by an aide, who does not Tweet about the Royal Vagina. Every time the princess sends a trashy Tweet, it’s replaced with a rainbows and unicorns Tweet. Is this a real thing? Is this something Julian Assange knows how to do? That’s some scary Big Brother ish.

There’s an upcoming garden party. Since King Liz Hurley’s Husband wants to dismantle the monarchy, this is a chance to do some PR. The little people will get to see Prince Liam as he walks by on his way to the party and recognize what a fine king he’ll make one day. The head of security wants to discuss death threats, but the Queen is more concerned about his commoner daughter “blowing” Liam.

The prince, by the way, is still talking about coffee vs. tea with Ophelia. This is how they flirt. You’ve got your peanut butter in my chocolate. You’ve got your chocolate in my peanut butter. I don’t think they’re going to drop this hot beverage banter anytime soon. Uh-oh, Coffee Girl has some stiff competition, or as Queen Liz Hurley would probably say, competition for a stiffy. Gemma, Liam’s ex-girlfriend, has arrived. The Queen doesn’t approve of Coffee Girl, yet she’s not bothered by tacky dark roots. Gemma warns Liam that she’ll fight for him, literally, she says she will “fight the bitch.” He points out that she’s the one who left him, but she thinks that since she sent porn selfies he shouldn’t be such a stiff…. Liam returns to Ophelia and her Starbucks.

The stupid redheads show up to be “funny.” I still hate them, so let’s move on. As the Royal Family greets the commoners, Eleanor is on her best behavior, smoking a cigarette and swigging champagne from a bottle as she walks the line with a bored expression. God, I love that girl. Prince Liam wants to make a better impression so he bodysurfs because … reasons.  This forces the security to bodysurf, too. A bodysurfing bodyguard, this show is breaking boundaries. The commoners think this is the best thing to ever.

When the party starts, Jasper tails Eleanor. If only the Queen could read this and give me a high-five for that potentially provocative pun. Oh, well. The princess spots the stupid redheads trying to flirt with Andy Sinclair, an Olympic swimmer. They scatter when Eleanor slinks over to put the moves on Andy. Jasper is jealous. Eleanor invites the athlete and his little swimmers to her bedroom. When her back is turned, Andy makes a rude remark about Eleanor to Jasper. Despite the vile things Jasper has said, he doesn’t want anyone else to call her a “slut,” so he sends the princess a selfie of himself knocking Andy out. The stupid redheads arrive for more failed efforts at comic relief. I won’t describe it because they don’t deserve it. Moving on, Jasper threatens to release the sex video if Eleanor tries to get it on with another guy. Swoon.

Back at the garden party, Gemma and Eleanor have a side-eye duel. Gemma shows how sophisticated she is by uttering a couple of words in French to some attendees and delivering royal air-kisses. She also knows the proper protocol for greeting the Chinese and table manners, so take that, Coffee Girl. Gemma will greet the Chinese however she pleases and can do bourbon shots so take that, Gemma. Dark Roots can drink whiskey, too, so take that, Coffee Girl. The drinking contest doesn’t work out for Coffee Girl, who stumbles off, “hilariously” knocks fascinators off heads and passes out in the garden. The prince finds this adorkable. When she regains consciousness, Ophelia asks why he dated, Gemma, he says that she was his first love. Coffee Girl hurls all over the place. Oh, Coffee Girl. He still likes her because it’s so endearing when spirited American girls vomit on his shoes.

King Liz Hurley’s Husband talks to Prudence, a servant who is working at the party, to find out her feelings on the Monarchy. This is the same woman who Cyrus made handle his scepter, so she’s not that into bluebloods. Let’s go back to Queen Liz Hurley who once again bullies Drunk Coffee Girl’s dad about her interest in Prince Stiffy. She needs to mind her business because decorated war hero Captian Alistair Lacey is lurking in her bedroom. The palace has some half-assed security. In any case, they kiss and express their love for each other. He’s kind of hot, so I’m not going to judge her.

In other news, that sexually harassed servant girl has a gun. Of course she does, because of the half-assed security… Scheming Cyrus is in bed with some married father and plotting to kill the king or the prince or something so he can take over… Prince William asks the King to give him a chance to prove himself before abolishing the monarchy and the king agrees. Emmy bait.