It was revealed that Ryan is actually a good guy. Shelby saved thousands of lives by stopping the airstrike. Alex still feels the need to be the hero as she risks her life, again, to save innocent people. The jury is still out on whether Miranda is good or straight evil. 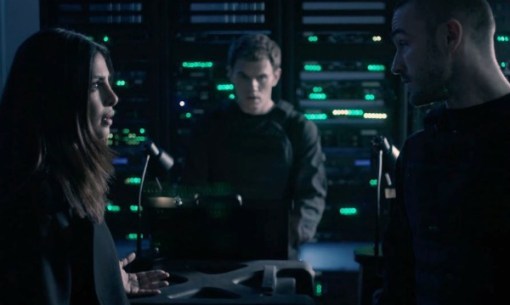 THIS WEEK’S PAST: The name of the game is convincing Owen that Lydia is the head recruiter of the AIC, which she is. So, of course, Alex is going to do just that.

Alex sends Shelby an image of Lydia’s map of the places she’s been. With the map, Shelby discovers that at least five of Lydia’s past locations match up with suspicious deaths that were flagged by the agency. Coincidence? I think not.

This week’s lesson is about extracting assets safely, meaning the recruits get to go international! Their mission is to get a German intel out of the country before the Germans find him. While there, the AIC recruits have to run intel on another German target. Talk about double duty.

Owen is the actual target and the recruits have to get him out before his enemies find him. He trusts these people a little too much in my opinion. To make things more difficult, he disappears. Since Alex is basically a bloodhound she quickly locates him at a café and tries to sneak him out the back. There, three men in cloaks Taser the two and try to take Owen away. Thankfully Ryan, who abandoned his AIC mission to save Alex, is there and knocks the attackers out. He leaves Alex and Owen to head to the safe point. But the safe point isn’t so safe because when they arrive a man named Daniel is pointing a gun at them.

Daniel is the son of a woman who was killed because of Owen. Oh how Owen has gone full circle. Owen obviously has a death wish as he begs this guy to kill him, but Alex won’t stand for it. She is able to get the gun from Daniel and makes him leave. Even though Alex saved his life, Owen is pissed at her. Okay Mr. Death Wish, okay.

Leon has become a double agent for the FBI under Nimah’s direction. So when it’s decided that Dayana and Leon have to kill the German target, Leon takes the high road. Dayana has no issues and grabs the gun saying, “if you don’t trust the CIA, then you don’t deserve to be here.” Leon takes the gun from Dayana and says he’s protecting her. She thinks it is sabotage.

Back in America, Dayana tattles to Lydia saying that Leon is not loyal to the cause. Way to be heartless. Lydia agrees and says he’ll be gone by the end of the week.

Alex has finally proven to Owen that Lydia is no longer the daughter he knew. Owen found his own evidence proving Lydia is with the AIC, but says he can’t betray her. However, his moral code takes over and he meets with Shelby and Alex to devise a plan.

THIS WEEK’S PRESENT: Harry, Sebastian, Dayana, and Leon are in glass rooms with the other hostages. They see a guy get questioned and shot. Come to find out, Will the computer whiz is helping take out the hostages that the terrorists call radicals.

The terrorists are asking the hostages, who they believe are in the AIC, questions about certain locations and times. Will is using a computer system that states whether the person was there or not. If the hostage matches three of the locations asked, then they are executed.

Ryan storms in the computer lab demanding answers after the first hostage was executed. The lead questioner ignores him and says the next target is his kill. That target is Harry.

Ryan, clad in the terrorist mask and clothing, stands before Harry. Harry knows it is Ryan by the way he fidgets with the gun. Thankfully, Harry only matches one location and is spared.

Leon is the next to be questioned. Will starts to question the motives of the terrorists when Leon’s charts don’t match up. While his answers line up with the appropriate locations, Will can tell he’s lying because the alias that matches his answers is supposed to be female. This means Leon is covering up for someone. And that someone is Dayana.

The lead questioner is ready to blow Leon’s brains out for lying when Ryan tackles him to the ground. Just as the terrorist is about to shoot Ryan, Will comes out of his lab and shoots him in the back.

After all the commotion, Alex pops out of nowhere to help them out. Will puts out a message to the terrorists saying the questioning is done, allowing the three to evacuate the hostages.

Rayna, Alex, Ryan, and Will are moving the hundreds of hostages through the lobby when Ryan mentions it looks like there are more people than before. That’s when they realize some of the terrorists are hiding in plain sight. Awesome. Now, our beloved FBI agents must do their best to get everyone to safety without getting themselves killed.

Apparently Miranda told Nimah what she was doing was going to protect people. She was wrong.