Brains, beauty, talent and accomplishments, Rachel Lindsay is the most hyperbole Bachelorette in the history of the show. Brains, beauty, talent and accomplishments, Andrée H. is the most hyperbole Bachelorette recapper in the history of TVRD. With no further adieu, take it away! — Elaine F. 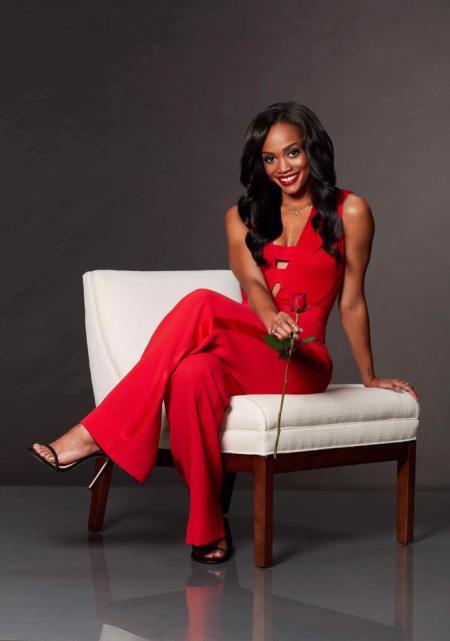 Andrée: So far this group date is a barbecue and playing football. Definitely a guy’s date. Blake is so right about Lucas. He is 100% only here to be on television, and he’s not even trying to hide it.

Elaine: As a rule, when it comes to reality TV, I say celebrities make everything worse, but Ashton Kutcher and Mila Kunis are entertaining me, so they are allowed to visit any time. Much better than Kevin Hart in a CVS hot tub. And no, I’m still not over it.

Andrée: Nor should you be, Elaine. We can and should hold that against the franchise forever! I love these two; this is a pretty great guest spot. They are also making this date way more enjoyable. I am into this ‘Can you be a good dad?’ relay race. In all fairness, Babybjörn is incredibly difficult to figure out how to put on the first time. I’m having a lot of trouble watching Lucas’ act, after watching him act like an entirely different person one year ago on Ex Isle. If you are going to fake a character for TV, maybe keep that same character on all the reality dating shows you go on.

Elaine: Wise words. I salute Ashton Kutcher for refusing to Whaboom with Lucas. Why legitimize it? “Aspiring drummer” Blake E. needs to follow suit and stop focusing on another man’s Whaboom.

Andrée: I salute Ashton for that, but he loses all those points for allowing this sham of a man to win the competition. I am confused about this whole Blake thing. I don’t remember him from Ex Isle at all. He said that Lucas has been doing the Whaboom thing for three years, but he was certainly not doing that on Ex Isle a year ago. Either way, it’s stupid, and it shouldn’t have gotten either of them a spot on this show. This is a legitimate reality dating show — come on!

Elaine:  Kenny, the professional wrestler, is smart, mature, funny and cute. I would give him the group date rose. I am not the Bachelorette. “Once you go black” Dean gets the rose and a kiss. I don’t mind him, but I think he’s out of his league. Dean put way too much thought into going for that kiss. I don’t know how he’s going to compete with guys like Bryan with a “y” (aka Mr. First Impression Rose) who know how to take the wheel.

Andrée: I want to know what his actual job is. Like maybe he is a lawyer who just likes feeling up men for a hobby. Dean doesn’t have a chance in hell. He lost his chance months ago when he uttered that ridiculous line.

Elaine: Agreed. Rachel is out of Dean’s league. First one-one-one date goes to Peter. He was first one out of the limo, but he didn’t get a lot of airtime at the first cocktail party. Flying under the radar, that one. Rachel is bringing along her dog Copper. You don’t just introduce any rando to your dog: This is serious business. And off to Palm Springs for Barkfest. Hot guy + dogs. Obviously, I love this date. Peter gets the first obligatory fireworks of the season.

Andrée: Aww! Her doggie has a cast! Poor little baby! This date is basically my heaven. I want to take my dog on an epic Bachelor date. He totally deserves it. Peter has a totally unfair advantage over the other guys, because seeing a guy interact with your precious baby dog like that is definitely tugs at the heartstrings. Rachel has big-time feelings for this guy. I feel like she’s ready to end the show this second.

Elaine: I’d be down with that. Move on to the wedding special and mocha, gap-toothed babies. Group Date No. 2. Now we get to find out who has a secret girlfriend. Well, one of the girls warned Rachel that DeMario is shady and he’s been getting the cocky edit since the get-go so we all can see where this is going. Obvious much, Bachelorette?

Andrée: I am excited for this girlfriend! Lucas is too canned and showy; it’s not real entertainment. Angry ex/current girlfriends? Now that is entertainment. Bring it on! Nope, no entertainment for us, now they are going to play a basketball game in front of a packed house. I am hoping it’s packed with this ex-girlfriend. “Women in general, you know, they love watching their man play basketball” – DeMario. “Incorrect. Women in general, like dating men that aren’t dating other women.” – Andrée.

Elaine: LOL! Here we go! Lexi is here to bust DeMario. She dressed up for the occasion, huh? This is the one and only time she’s going to be on national television, you’d think she would have stepped up her game. I mean for God’s sake, she’s got a scrunchie around her wrist. Rachel is literally calling him out, and DeMario thinks he’s getting a rose.

Andrée: Personally, I would be looking fly as hell if my boyfriend left me to go on The Bachelorette and I went on there to expose him. Aha, DeMario, not today. The look on his face when he turned the corner. Of course, his line is “She’s crazy.” You can tell she is crazy, but I think she’s telling the truth.

Elaine: DeMario is talking as fast as he can. Rachel’s a lawyer, this deflection and doubletalk are not going to fly. Fearless prediction: DeMario may be the rare early castoff to make it to Bachelor in Paradise. They can always use another douche. I love that Rachel just dismissed him with a GTFOH. She is seriously pissed, and Chris Harrison can barely contain his glee. I notice that he is giving her a wide berth though. I guess he doesn’t want Rachel to bite his head off. Her badass response only strengthens my lady crush. I feel like the typical Bachelorette would be sniveling, you know?

Andrée: She’s reminding me so much of Judge Judy right now. Get the fuck out she says. Wooo! Chris Harrison is not trying to be the one to calm her down!

Elaine: This is like a golden ticket to the other guys on the group date. Now all they have to do is trip all over each other trying to be the most comforting. Josiah does the best job. I want him to get the group date rose. And he does. Yay! I’m glad Rachel and I see eye-to-eye on this. But the previews promised more drama, and we don’t have that much time left.

Andrée: I phased out for the rest of this date. The drama was entertaining but far too short lived.

Elaine: Here we go. DeMario is lurking outside the mansion so that he can further beclown himself. And of course, the episode leaves us hanging. I love the drama of all the guys banding together to confront him because “he lied to all of us.” Eye-roll. Seriously, I want this to culminate with a physical altercation. Nothing that will get any of them thrown off but at least lots of posturing and some shoving. Maybe a Whaboom to the chest. Let’s just whip ‘em out and put them on the table, boys.

Andrée: Oh yay, more drama I can’t wait! Whaaa…to be continued? Assholes. It’s pissing me off that the show is giving this Whaboom shit so much airtime. Stick a fork in this shit. Jesus.

The Bachelorette airs Mondays at 8 p.m. ET on ABC

One thought on “The Bachelorette Recap: Rachel’s Season Ep. 2”

I predict that we will get some freshness this season, hopefully, with an intelligent Bachelorette, things will be brought up...