Pretty Little Liars Recap: “The Glove That Rocks The Cradle”

All the Liars are hanging by a thread now that Marco is hot on their trail. But Spencer? Well, Spencer’s past has been catching up with her all season but it came to a head after Marco followed her to the woods. For seven seasons she’s been the Liars’ rock; could she now be the one to ultimately bring them all down? 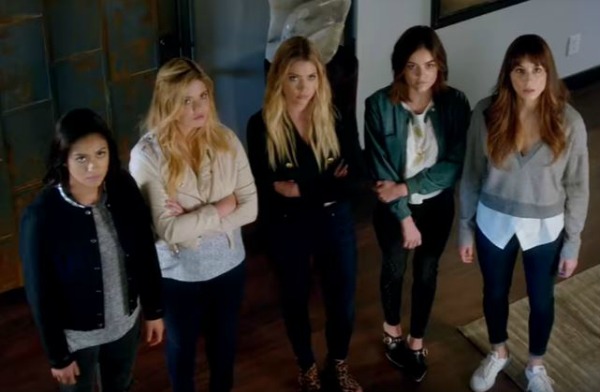 After a lot of questions about using Archer’s card, Spencer replies “I don’t recall” over and over again. After the first detective gives up, Marco enters to be mister nice cop but the act does not stick. He tells Spencer to get a lawyer because in two days he’ll have Archer’s receipt from that night and if Spencer’s signature is there, he’ll be getting an arrest warrant.

Back at Alison’s house the Liars meet to go over their next plan. Because Caleb created the security system for The Radley (bless), him and Hanna will disable cameras during a staff meeting and steal the receipt. The plan gets interrupted when the game hums to life announcing Hanna’s turn.

The game phone reads, “Pick up my homework or go to detention,” the cell phone reads. “Remember, prison food makes you fat!” The phone gives Hanna an address of a computer store to get a hard drive for A.D. At the same time little A.D.-to-be Aria gets a text that reads, “Hanna thinks it’s her turn, but you’re playing for me.” LOL – sucks to be Aria.

Speaking of Aria, her personal life with Ezra got back to normal real quick. While she’s off playing A.D.’s sidekick, Ezra speaks with the publisher of the book they wrote together. The publisher wants him to tour the book alone because she wants the audience to picture Ezra and Nicole together, not Aria. Lucky for Ezra, Aria doesn’t care because she wants to stay in the shadows as A.D. lurks around the corner.

While Hanna and Caleb grab the hard drive from the computer store, Spencer is out to find her own hard drive. Well, not on purpose. She stops by Marco’s apartment to plead her case which I think is dumb at this point. She tries the human angle with Marco stating that Archer was a monster and basically admits to killing him without actually saying the words. Spencer tries to reason with Marco to let this case slip through the cracks. Meanwhile, I’m screaming at her, “ARE YOU CRAZY!?” Of course it doesn’t work and Marco forces her to leave. As she’s walking out, Spencer swipes a hard drive that had Lucas’ name on it.

Later, the Liars plug the Lucas hard drive into the computer and Lucas’ interview from the night of Charlotte’s death appears on the screen. He originally was Hanna’s alibi for the night, but this recording shows him recanting that original statement. He said he helped Hanna because she asked and he believed she didn’t have anything to do with it. But were the other Liars capable of killing Charlotte? He told the cop, “Let’s just say I wouldn’t be surprised.” Another strike for Lucas in the A.D. column.

No matter how much evidence is stacked against Lucas, Hanna continues to defend him. She tells the girls that “No matter how shady you guys looked, I know in my heart you’d never hurt me.” This would be the perfect time for Aria to confess her wrongdoings; she keeps pointing the finger at Lucas. She also suggests they stake out the locker where Hanna is supposed to drop the hard drive to catch A.D. Ugh Aria, just stop please.

While everyone is spread across Rosewood either at The Radley or at the school, Aria is playing A.D. Her mission was to destroy the newly decorated nursery in Ali’s house that Emily put together. She not only rips stuffed animals apart and breaks furniture, but also splashes fake blood over everything.

Aria is almost caught literally red handed when Emily and Ali come home early from the locker stake out. Ali was pushed by a mysterious someone, so while Emily is putting her in bed to rest, they hear a thump upstairs. As Aria is fumbling around to get out of the house, Emily is walking around with a candlestick like they’re in the middle of the board game Clue. Of course Aria gets out in time, but the sight she left sickens Emily and Ali to their core.

Coming to their aide, Spencer and Aria (acting like everything is totally cool) comes to see the damaged nursery. They decide that Lucas might have a dark side, but not like this. Aria sheepishly asks if Emily got a glimpse of “him” but Emily says it couldn’t be the same person. A.D. wouldn’t have been able to get back from the high school to Ali’s house in time to destroy it, meaning there’s an accomplice. Yeah, pointing fingers at you Aria.

At The Radley, Hanna is trying to find the Archer receipt in the boxes but is having no luck. My guess is because A.D. already has it. Anyways, Caleb comes in to warn her their time is almost up and Hanna is panicking. Instead of leaving, Caleb tosses boxes on the ground and busts a pipe to soak them so they’re unreadable. In the security room, Hanna captures a glimpse of Lucas on the security cameras waiting outside a room before leaving. Interesting.

Lucas’ next stop is the apartment where the Liars corner him. He explains that he did stay in touch with Charles, but as Charles. He never knew he became Charlotte. Lucas does admit he feels responsible for them being tortured because most of the emails he sent to Charles/Charlotte, Lucas would describe how mean Ali and her loyal Liars were to him in high school.

And his comic book? It was given to Lucas with a note that said, “Want to keep your friendship a secret? Meet me at the Radley.” It’s what Hanna saw on the camera but no one showed up. Lucas went to the apartment to find the second comic book the apparently turned the idea of vengeance into a game. Sound familiar? They asked him how it ended and Lucas admits it was never finished.

Well I guess we can expect an alternate A.D.-style ending! Yay!

Who is A.D.? Honestly, there was a part of me that thinks it could be Caleb, call me crazy but I don’t know what to think right now.

Pretty Little Liars Recap: “In the Eye Abides the Heart”

Last time we played "Liars’ Lament" the board announced it was once again Hannah’s turn after she failed to complete...