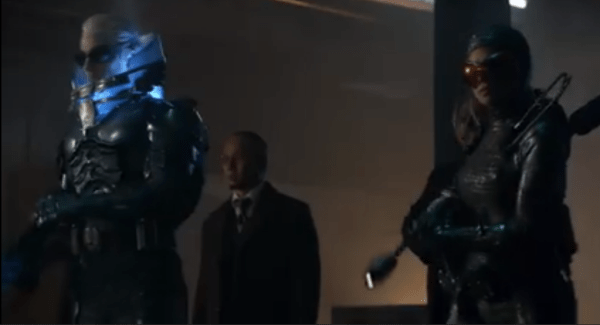 So there’s a bit of catching up to do since the last recap. Here is the basic ‘Reader’s Digest Version’. Young Bruce Wayne is back in Gotham after being captured by the Court of Owls and then trained by a mysterious figure know as the Sensai. A frantic Alfred, who’s been searching for Bruce ever since he discovered that the Bruce Wayne clone had taken the boy’s place, finally encounters Bruce and the Sensai. Alfred makes short work of the Sensai, after a short altercation, by plugging him with a gun. Both Jim Gordon and Lee Thompkins have been infected by the Tetch virus and Lee is trying to entice Gordon to give into the virus and leave Gotham with her. In the meantime the Court has set off a bomb in the middle of the city releasing the virus among the general populace. This, of course, creates a huge headache for the GCPD under the command of Harvey Bullock. In the middle of all this Penguin and the Riddler have chosen sides and are trying to kill each other. The Riddler, aka Ed Nygma, has teamed up with Barbra Keane and Butch and Tabitha. Penguin, aka Oswald Cobblepot, is getting help from Ivy Pepper, Victor Frieze and Brigitte Pike, aka Firefly. Oh yeah, in the middle of this little fray Fish Mooney has reappeared. The Court of Owls has all but dissolved, however before his untimely demise, the Sensai gave Bruce instructions on how to contact the mysterious ‘leader’ that the Court had mentioned. There, that should do it, now on to business.

So the virus is now loose upon the citizens of Gotham. It seems to be causing the same kind of chaos that one would imagine if the trump administration was allowed to function completely unchecked. Obviously the GCPD is overwhelmed with all this foolishness and Gordon and Bullock are the ‘go-to guys’ to try to handle it. Jimbo’s trying to fight the virus during all this and he’s making a valiant effort. Bullock knows all this. He also knows that Lee Thompkins is betting that Gordon will lose the battle because, ultimately, he wants to be with her. Lucious Fox shows up with hopeful news. Apparently there is an antidote to the virus and he knows that Hugo Strange was working on this antidote for the Court. Now all they need to do is find Strange. He was in police custody BUT due to a mis-management of events he got away. They go to look for Strange at the train station figuring he’ll be trying to leave the city. They’re right. But they aren’t the only ones who know where to find Strange. Fish gets there first. She wants to use Strange to give her more of the virus so she can gain total control of the city. In their attempt to exit, they run into Gordon and Bullock. A scuffle ensues, of course, and during the said scuffle Fish learns that Strange also knows how to concoct the antidote for the virus. This only increases his value to her. As Gordon and Bullock make their move to take Strange, Fish unleashes a surprise on them. Mr. Freeze and Firefly appear. Freeze creates a wall of ice that allows Fish to escape with Strange. Curses, the good guys are foiled again — or are they. Using the super-human strength given to him by the virus Gordon pummels through the wall, but not before Fish manages to get away.

While in captivity Strange admits to Penguin that he knows that there is a supply of the antidote and where it is. Once they arrive at the location of the antidote Fish tells Penguin that she plans for them to rule Gotham together. However, upon trying to exit the building they run into a bit of a delay in the form of, hood assassins. A tussle ensues and Fish’s crew appears to be a bit overmatched. Gordon and Bullock show up in the middle of this mess and Jimbo proves to be quite the match for the assassins. During the goings-on Gordon accidentally manages to stab Fish, killing her. Oswald is quite upset by this development. A touching death scene ensues. The cops, however, get Strange. He admits that he can make more of the antidote, which was destroyed during said tussle, though he needs a key ingredient — some blood from Jervis Tetch. Tisk, tisk, there’s always something.

Tetch may be a bit hard to acquire. It seems that while he was being transferred he managed to get abducted by none other than Tabitha Galavan and Butch Gilzean. Now Barbara Keane and Ed Nygma are in possession of a vital piece of the antidote puzzle. Meanwhile, during all that’s going on, Lee contacts Gordon. Again she tells him that he needs to give into the virus and join her. She plans to leave the city by train in the afternoon and she wants him to go with her. He agrees. He and Bullock come up with a plan to save the city. They have Penguin in custody and Gordon wants to trade him to Nygma and Babs for Tetch. Jimbo contacts Ed and they agree to a time and place for the exchange. This, of course, throws a monkey in the wrench of Babs’ plans. Penguin protests that plan all the way to the meeting site. They meet and the exchange takes place. Babs, Butch and Tabby show up in an attempt to thwart the exchange but to no avail. Penguin makes his getaway during the ensuing chaos but Gordon improvises a solution when he, Tetch and Bullock are cornered. Babs gets Tetch but Gordon got what he needed — a jar full of Tetch’s blood. He and Bullock get the jar into the hands of the GCPD’s lab techs who immediately produce the antidote.

In an effort to save Lee from the virus Gordon, still under its effects himself, goes to the train station to meet her. After a bit of a showdown with Bullock, who followed him, Gordon boards the train with his beloved and they head off into the twisted sunset. On the train though Gordon gets the upper hand on Lee and manages to inject her with the antidote. He then injects himself. Bullock slipped it to him earlier. Maybe things will work out between them, but alas, not so much. When Gordon arrives at Lee’s place later to chat he finds an envelope containing a ‘Dear Jim’ letter. In it she tells him that he needs to follow his heart and keep the city safe. After he accomplishes that then, maybe, they can be together.

After the episode with the Sensai ended Alfred and Bruce find themselves in the GCPD interrogation room with Bruce handcuffed to a table. Alfred attempts to reason with young Bruce and tries appealing to the better angels of the lad’s nature. He attempts to bring Bruce back to his ‘right mind’ by recounting stories of the boy’s childhood and the love and care of his parents. It doesn’t work. When the opportunity arises Bruce uses a part of a pen to unlock himself from the handcuffs and escape. He’s headed to find the mysterious ‘leader’ that the Sensai spoke of. As Bruce makes his way to the leader’s location Alfred manages to follow him. Once at his destination Bruce finds the one that he seeks — none other than Ras Al Ghul (the demon’s head). He also enters a chamber that contains a mysterious glowing pool (the Lazarus Pit). Ras, of course, rattles on about Bruce’s destiny but in the middle of the conversation Alfred interrupts. Ras takes the opportunity to issue Bruce an ultimatum, kill Alfred, complete his training and begin his path to become Das’ heir or fade into obscurity. After a few ticks of hesitation Bruce complies. He takes the sword that Ras hands him and stabs Alfred through the chest. Remorse is immediate though and Bruce panics.

As he tries to help the dying Alfred, Ras tells him that his destiny is complete. He also tells Bruce how to help Alfred, use the water from the pit. Bruce scoops out a bowlful and pours it over Alfred’s wound. The butler immediately comes back to life and Bruce gets him to the hospital. While Alfred is in surgery Bruce gets a visit from Selina. She heard what happened and wants to comfort Bruce. He rebuffs her and she leaves in a righteous huff. Shortly after this we see Bruce at Alfred’s bedside begging him to pull through. Of course Alfred does. However the next time we see the young Bruce he’s wearing dark clothing and a mask. He’s also rescuing a family, not unlike his own, from the gunpoint of a mugger. The genesis of ‘The Batman’ has begun.

While making his getaway it seems that Oswald also managed to capture Ed Nygma. Ed, being the resourceful bastard that he is, escapes from the handcuffs that Penguin placed him in and turns the tables on his captor. After pulling a gun on his foe, Ed takes Penguin back to the riverfront pier where Ed tried to kill him before. This time things won’t go the same way as before. Mr. Freeze and Ivy walk up behind Ed as he tries to shoot Oswald — with an empty gun. Penguin set him up. Babs showing up was a huge stroke of luck for Oswald. She knocked Ed out and this allowed Oswald to put his plan in motion. Penguin has Freeze turn Ed into a popsicle.

A very frustrated Barbara tells Butch and Tabby to meet her at their safe house so they can plan their next move. After she leaves Butch and Tabby plan to do away with Babs once they meet up again. It appears that she’s tap danced on their last nerve. They head for the safe house. Babs catches Butch preparing for their meeting and puts a bullet between his eyes. She then goes after Tabitha. Guess there’s gonna be a reckoning. Once she arrives at the safe house Barbara gets the drop on Tabitha and they try to talk things out. Once Tabby finds out that Babs shot Butch they go at it. Babs appears to get the upper hand until Tabby makes creative use of her whip and an exposed electric cable that brings Ms. Keane’s short criminal reign to a shocking end.

In the end we find that the antidote has been administered to the ailing populace of Gotham. Butch, after all this, isn’t dead and his real name is Cyrus Gold. Selina runs into Tabitha and the two agree to team up. Tabitha even lets Selina have a go with her whip. The young lady appears to be a natural with it.

Thus another season of Gotham come to an end.

Penguin plots his comeback with a little help from a new friend. Jim Gordon and his Uncle Frank part ways...