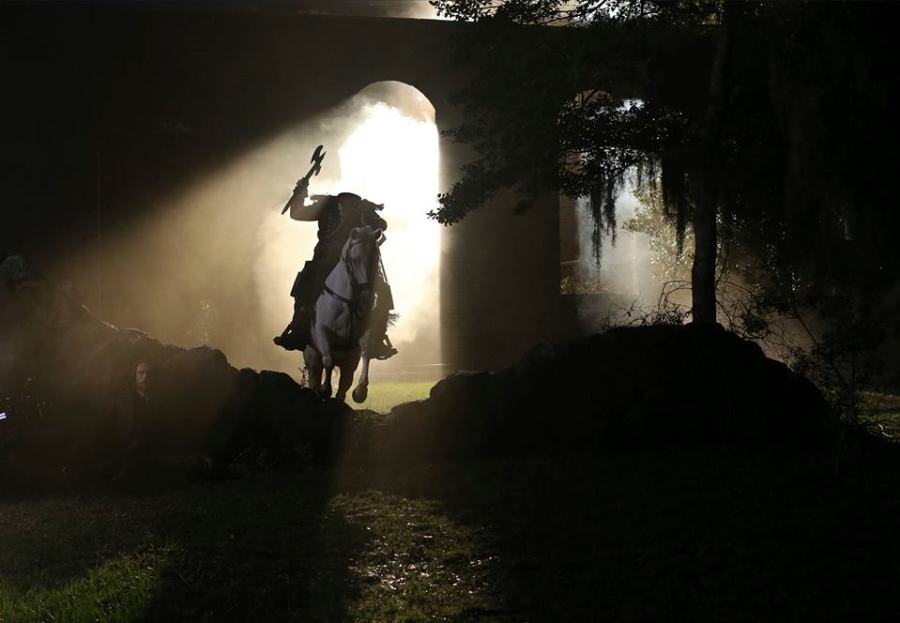 Theme: Make sure to use Windex, never forget your SPF and take up an instrument.

We have to get you caught up on last week: Abbie and Jenny met the spirit of their mother, Lori, who directed them to Grace Dixon’s journal for info on how to take down Moloch. Captain Irving escaped from Tarrytown Psych and there’s some foolishness going on with Katrina, Henry and Baby Moloch. Blah, blah, blah.

Abbie and Ichabod are playing a guessing game.

Abbie: So… you cannot tell a lie. Who said that?
Ichabod: Oh! Oh! The little wooden puppet boy.
Abbie: Pinocchio?
Ichabod: Yeah.
Abbie: Nope. Guess again.
(He cheats and and can see the answer is George Washington.)
Ichabod: George Washington? He was our Liar-in-Chief. He founded the Culper spy ring! That was a network of liars.
Abbie: Thank you, colonial myth buster.

Pain in the Glass: We’re back to that mirror business again. Katrina pops up in the magic mirror which sadly is not as interesting as the one on “Romper Room.” She tells Abbie and Ichabod that pesky Moloch still lives and is about to turn out the lights on this big blue ball we call home. Katrina runs out of battery power, er, Henry’s coming.

Dear Diary: Mills and Crane decipher the code in Grace’s journal. The weapon they need is Enoch’s sword, an Old Testament badass. Turns out that mirror Katrina used is a touchscreen, Henry puts his hands on it and eavesdrops on Ichabbie. He dispatches the Headless Hessian to get the thing. Much scenery is chewed and the Horseman departs. The Horseman and Ichabbie both get to the sword’s location, but the sun’s coming up and Headless forgot that he burns easily. 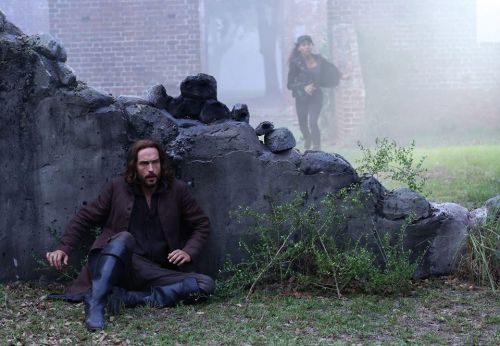 Ichabbie are between a rock and a hard place.

In Other News: Jenny tries to get Captain Irving across the Canadian border where he can enjoy hockey and Tim Hortons doughnuts, he decides not to flee…. Henry has a new toy and it’s even better than the iPhone 6. Is it a Samsung Galaxy? Nope, it’s a shofar, a horn used as a battle signal.

Stone Cold: To find the weapon, Mills and Crane enter a cavern decorated with what looks like statues. A Gorgon guarding the sword turns anyone who meets its gaze to stone. One of victims is a descendant of Grace. Abbie sees a pattern: Women in her family are screwed. Ichabod comforts his “Leftenant,” it boils down to: “Hey, the odds are in your favor.” Abbie’s back on board and figures out that that someone without eyes would come in handy against the Gorgon. When Headless shows up, the Gorgon is distracted so Abbie looks for the sword. No luck there.

After Headless slays the creature, Ichabod can see that trick the Horseman does when he appears in the form of Abraham. Ichabod remembers fencing with his former pal and then dueling him over Katrina. It’s a round of “She doesn’t love you, she loves me.” “Does not!” “Does too!” Abraham hears Henry’s horn and heads out. (You know you clamor for puns like that.) Now it’s Ichabod’s turn to doubt his mission. Headless has his woman and Moloch is ready to bring down the house. Abbie returns the favor from earlier this episode and tells him why he should stick with the mission. There’s water in a large well looking thing in the center of the room. Well, actually it’s oil and because the price has dropped so much recently they just decide to set fire to it and and heat the room for cheap. Actually, the Witnesses figure they can burn off the oil to get to the sword. Ichabod reaches in all King Arthur like and pulls out the sword. He proclaims that Moloch shall not rise.

Cliffhanger: Oh snap! Moloch has risen. We thought you were going to spend more time on that Baby Moloch story, but okay, Show.

One of the strongest episodes to date, it's Abbie-centric and provides more evidence that Nicole Beharie can carry the lead....