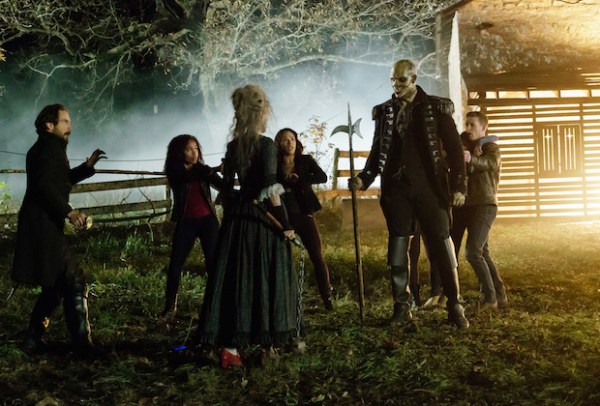 Agent Grace Abigail Mills disappeared to a dimension in another time zone. In our world, she was gone for a month but for Abbie time passed more slowly and she spent ten months in isolation. Ichabod Crane found her via astral projection and they both made it back to Sleepy Hollow. As far as her ex-boyfriend, Agent Daniel Reynolds, knows, Agent Mills tendered her resignation and left town for a while. Let’s go!

There’s a couple in a car. It’s their first date. Oh, so even extras kiss and make out on this show… Wait a minute, this is a rapey date. You know who does not like forced sexual encounters? The Kindred, that’s who. The creature that Ichabbie unwisely raised in a failed attempt to defeat the Headless Horseman is back, baby! The Kindred smashes the car window and drags out the creep. It goes like this:

Female Extra: Whew, I really lucked out. What kind of fiend takes a woman to a remote area under a bridge and gets rapey? Thank goodness some other man is in this remote area and just walked up and smashed the car window and dragged this would-be rapist out and then started beating him and growling. He seems nice. Let me get out of the relative safety of this car and talk to him. Hi, hulking growling stranger. Sorry to bother you while you are apparently killing my date, but “You saved my life.”

Of course, he kills her. Why couldn’t she just stay in the car until she knew what was going on? That extra exhibited some poor judgment. Oh, well, fare thee well stupid extra. Moving on.

Crane is in bed and apparently wears a nightshirt. One of you told me that his knees are visible, but I still didn’t catch it and Mr. TV Recaps saw me with my nose pressed up to the TV and made that judge-y face he likes to make. This is a Zapruder film moment, let’s analyze.

Abbie is still coping with her ten months alone in another dimension. This is good. I was hoping there would be some after-effects. She’s playing chess by herself, which is what she did when she was trapped in that other world. Abbie still doesn’t want to talk about it but she acknowledges again that she thought about Crane all the time, Ichabod was her “Wilson.” Does Crane get the reference? Did they watch Cast Away on one of their Netflix and Chill nights? Hopefully one day, they’ll learn that Netflix and Chill is now a euphemism. It turns out that in the month she was gone, Crane killed her houseplants Watering them with his tears didn’t work.

Ichabod let Abbie’s houseplants die, so he replaces them with low-maintenance cacti, which are harder to kill.

Abbbie: Is this new Tex-Mex decor, really our new normal?

The damn sexy hobo goes to the nursery to buy new plants and runs into that extra trying to ship herself with Crane. It was just a matter of time until that one popped up again. She hasn’t heard from him in over a fortnight. Good, get the hint and move on, sister. We all hate you. Crane calls her “Miss Corinth” and she says: “Zoe, call me Zoe like a normal human being.” Hee! What would she think of our nickname, Crextra? During this conversation, she accuses him of ghosting and he says: “They always seem to find their way into my path.” Just wondering if that was some reference that Crextra is otherworldly but by the end of the episode, it doesn’t seem to amount to anything. 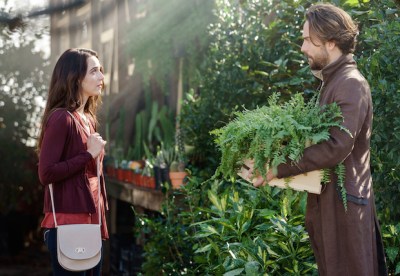 Agent Daniel Reynolds summons Abbie to the scene of the double homicide despite the fact that she resigned. Agent Mills is not pleased to learn that Danny never filed her resignation. What’s important is that Abbie can tell from the clues the culprit is the Kindred. He’s targeting couples. The Kindred is a serial killer with sexual issues now? Does he have three names? He should. Let’s call him: Wayne Gacey Kindred.

The Kindred is back in town because it was summoned by Pandora so that her chocolate god, The Hidden One, can have a minion but the Kindred has his own agenda. Betsy Ross flashback. Something something plot. Betsy didn’t care for Crane when they first met. This looks suspiciously like the trope about the beautiful woman who impresses the hero with her feisty independence before they give in to their feelings. Does anyone out there want to know more about the Betsy/Crane backstory? The bottom line is that Ben Franklin created a lady for the Kindred but they never got to be together and the Kindred is lonely.

Crextra is also lonely, so she tracks down Ichabod at the archives. It goes like this:

Crane: Other than history, we don’t have much in common. I have other interests.

Crane: Can you be a tiny black chick with doe eyes, who barely comes up to my chest?

Crextra: “Do you have a wife?”

The Audience: Yes! Her name is Grace Abigail Mills. Why are you still here? Go away! Gah!

The Kindred: I’ll do you everybody a solid and kidnap Crextra for something something plot. Maybe I’ll kill her just like I killed those other extras.

The Audience: Thank you.

The Kindred and Ichabod battle, but Crane loses and Crextra gets carried off. Abbie figures out where The Kindred is. She says: “The carriage house. The Kindred has been there before, it’s where the Headless Horseman tried to keep his own bride.”

That is some shade. She didn’t even say Katrina’s name. They rescue Crextra, everything is fine. One criticism about this episode: It opened with an attempted rape scene and then we got a woman with the old-school bound and gagged business, it’s a bit cliché. In fairness, Abbie, Jenny Mills, Sophie and Betsy can handle themselves so it’s not like this is a show that relies on powerless women but it was annoying. In any case, the Kindred meets his Lady Kindress and kissing ensues. Yes, demonic creatures on this show are getting it on. Ichabbie shippers are being trolled. The scene is delightful. While Mr. and Mrs. Kindred are getting all lovey-dovey, Abbie, Ichabod, Jenny, Joe and Sophie are just standing around gobsmacked. After that’s over, Crane tries to make Crextra feel better by saying he cares about her and would be so lucky to have a woman like her but he’s not ready for a relationship. Crextra says: “Truthfully Ichabod, I think you are ready for someone. I just don’t think it’s me. And that’s okay.”

After that’s over, Crane tries to make Crextra feel better by saying he cares about her and would be so lucky to have a woman like her but he’s not ready for a relationship. Crextra says: “Truthfully Ichabod, I think you are ready for someone. I just don’t think it’s me. And that’s okay.”

See? Zoe is great and you guys have been so mean to her. Her real name is Zoe Corinth and she will eventually be memorialized with her own character bio when I get around to it. Try not to be so judge-y next time….

Danny visits Abbie and talks about why he fell in love with her.  He says that she made him a better man, but lately he hasn’t been behaving well and “Abbie Mills Deserves Better.” Question: How loud did you scream? Sleepy Hollow apparently noticed your hashtags. Abbie’s response: “You love me? You never said that before.” Hmm, is she letting down those emotional walls? Abbie agrees to return to the agency.

The Hidden One sees that the Kindred is departing Sleepy Hollow and has a tantrum. Love is a weakness blah, blah. He magically kills Mr. and Mrs. Kindred. The Hidden One is a jackass and Pandora looks like she’s over it. Good. Litte Miss Crazy Pants went to a lot of monkeyshines to resurrect him and he’s unappreciative.  Let’s hope she switches sides.

Cliffhanger: Abbie and Ichabod are hanging out drinking beer and playing chess and she cuts her finger while opening a bottle. Crane goes to get a bandage. Abbie distractedly traces her finger on the table and realizes she’s drawn a symbol in blood. It’s a symbol she saw while trapped in the catacombs. She looks freaked out and hides it from Ichabod. Ruh-roh!

We love your thoughts. Comments don’t appear right away but we promise we’ll get to them.

Abbie is still dealing with the effects of being in a remote otherworldly hellscape for ten months. Very good. She...