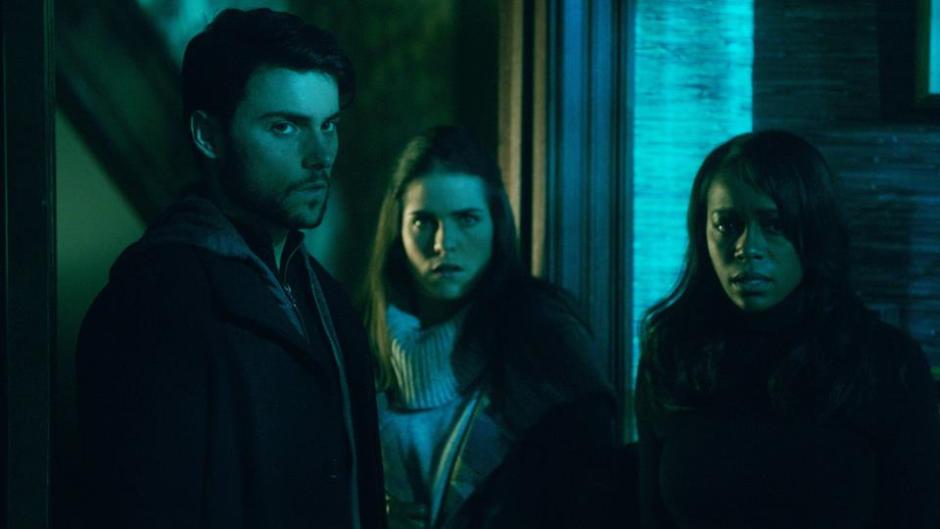 Case of Week: Yay, none of that tedium tonight. We spend so much time ignoring it.

Past Presumed Murder: Nope. The show is living in the now. We welcome our merged timeline overlords.

Present Day Not Quite Murder. Maybe Manslaugthter: Annalise orders Sam out and threatens to call 911. Oh, Sam if you left then, you wouldn’t have needed emergency services later. Annalise thinks this is a good time to mention her desk shenanigans with Mr. Sexy Cop in a blaze of details.  Annalise is getting close to “Cell Block Tango” territory because she knows Sam will not appreciate this.

Oh, looky, Sam finds the best way to prove he didn’t strangle Lila; he has his hands around his wife’s neck because Sam is all about poor life decisions. She challenges him to kill her, and he does … with words. Sam has some vile things to say about what he thinks of Annalise. It’s like “Who’s Afraid of Virginia Woolf” except Burton and Taylor were so much nicer than these two (Elaine likes Ye Olde Time-y references). Annalise storms out, Sam is an idiot so he hangs around because he doesn’t realize this show is not called “How to Get Away with Pissing Off Annalise.” 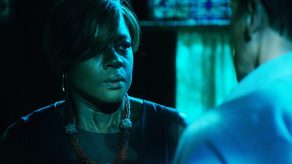 Sam pisses off Annalise for the last time.

Wes persuades a dubious Connor and Laurel to race to the Keating house because he thinks Rebecca is there. He insists that Sam will kill Rebecca to cover up his supposed murder of Lila. Michaela is already at the house to turn in the pilfered Scales of Justice trophy to Annalise. That’s not how this works, that’s not how any of this works. Michaela has bad timing because that’s when Rebecca sneaks in and Sam goes after her. Not bright enough to leave, Michaela hangs around screaming on the phone to Wes because Plaid Shirt and Bicycle is so tough. The Scooby Gang shows up. Wes ASKS Sam if they can leave. Five against one and this goof is asking permission. Guess he thinks this will get him extra credit. There is a struggle and Sam falls to his death. Michaela was the one who pushed him. Never saw that coming. Wait, he’s was still alive — until the Plaid Wonder (at least we think it was him — these scenes were kind of night-vision for us) hits him with the trophy. Okay, now Sam’s dead. For real. We know what happens next because we remember all the scenes from every episode.

Prim blouses aside, Bonnie gets freaky. She picks up a guy in a bar then double dips by taking Asher to bed. Two guys in one night. Welp, it’s always the quiet ones. Guess the first guy was lousy. Afterward, Asher gripes when he sees selfies of his “friends” at the bonfire without him. Guess Bonnie was lousy. Annalise, of course, is straddling Mr. Sexy Cop. She later calls Sam, begging him to come home. Why? She phones Bonnie to ask if Sam’s with her. Why?

Oh, now we know why. We see a flashback to the night of Sam’s death. Wes returns to the house. Annalise is there. She thanks him for killing Sam. Sadly, its seasonal finale time until January.  Though we’re now entering real time, there’s still plenty of questions to keep viewers trying to figure out just how Annalise and the Scooby Gang Get Away With… Manslaughter. This could keep a recapper up nights between now and the show’s return. That is cruel, but okay, Show, I’m enjoying the ride.

Lynn Whitfield has had enough of everyone's BS. She pulls out a designer pen and stabs every single character in...