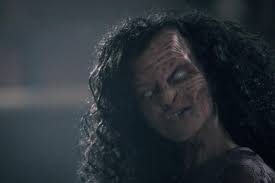 Ancitif  (The incorporeal villain only can be detected through his victim’s appearance and behavior.)

“The Golem”Backstory: The second of the Four Horsemen of the Apocalypse. He has the ability to take peace from Earth.

Backstory: In the 17th century, the demon possessed a group of nuns. Sheriff Corbin’s occult files contain video evidence that seven years earlier Jenny was controlled by the creature, who predicted that the Horseman of Death would slay Corbin and that the demon would kill Abbie. Jenny doesn’t remember how Corbin got rid of the evil entity, who disappeared for seven years.

Recent Developments: The demon hopped into the body of a food vendor to issue a threat to Captain Irving about his daughter Macey, inhabited into the body of a Sleepy Hollow police officer to phone Irving with a demand that he get Abbie and Ichabod to hand over George Washington’s Bible. When Irving took his family to a safe house, accompanied by officers, the demon took possession of Detective Luke Morales, who killed a fellow cop. The entity finally took over Macey, who snapped the neck of Reverend Boland. Ichabod remembered the French lanterns used by Benjamin Franklin for demonic exorcism and teamed up with Abbie and Jenny to borrow it from a group of End of Days fanatics whom Jenny had trained with. Using the lantern, Ichabod cast out the demon, freeing Macey. Though Ancitif was the blame, Captain Irving confessed to the killings because the police suspected that Macey was involved.

Distinguishing Features: When possessed by the demon, the victim’s eyes are glazed over with white.

Famous Last Words: Our plan is in motion. The witnesses can not stop us. Darkness will reign.

The Horseman of War Bio

Backstory: The second of the Four Horsemen of the Apocalypse. He has the ability to take peace from Earth.