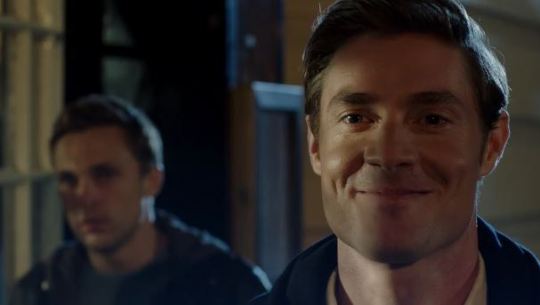 Robert, the former First Royal who was believed dead for the last year, has returned home. However, Liam was just told he would be the new king, and is currently sleeping with Robert’s ex-girlfriend. And that’s just the beginning of the shenanigans of The Royals.

Both Eleanor and Helena faint immediately after seeing Robert emerge from the shadows. Great “welcome home,” there ladies. Cyrus is the third person to greet Robert back from the dead and what does he do? He drunkenly tells Robert that Simon is dead. Uncle of the Year material you are.

Across town, Liam and Kathryn are being lovey dovey in bed when Jasper comes out of nowhere to drop the bomb. Liam runs through the palace and straight into the arms of Robert. How cute is brotherly love? Probably not so cute once Robert learns about Kathryn.

Hill gives Robert the files on his and his father’s deaths along with the video of Simon getting stabbed. Robert watches the video which leads him deep down the Internet hole. Robert watches every bad thing that has happened to his family from the fake paternity test to the mob that killed the King Slayer. It would have helped if he had just read a few recaps instead.

Eleanor informs Jasper that she is going to tell Robert about them. Of course she would leave out the lying and blackmailing part of their courtship because she obviously wants Robert to like her beau. Robert surprises the two in the library and what’s Jasper’s do for a first impression? He jumps up and screams ‘Ello Govna’ in his fake British accent. Priceless.

Robert is ‘happy’ for Eleanor, but while he says he likes Jasper, her older brother’s eyes say something else. Jasper and Eleanor’s relationship might have hit another speed bump and its name is Robert.

Hours later, a late-night walk leads Robert and Liam to Kathryn’s pub. As Kathryn is leaving Robert scares the daylights out of her. Yeah, I’d be terrified too if my supposed-to-be-dead boyfriend reappears out of nowhere. Don’t forget her current boyfriend is standing there too. Talk about a royal love triangle.

Liam, of course, returns to Kathryn’s later in the night and breaks up with her because of his brother. Liam is such a good guy it hurts to watch him sacrifice happiness again for someone else.

Britain finally learns the truth about the palace’s dirty secrets in a press conference. Helena first reveals the twins are Simon’s kids. While the press thinks that’s the only news, Robert appears. This comes after the press asks whether Liam would take the throne. Way to bury the lead, Helena.

There wasn’t that much drama in this episode, but it’s the tip of an oncoming iceberg. While Robert’s return might seem like a great thing, it does mean everyone’s lives are about to be turned upside down. When you’re a royal, you always have a lot to lose.

Cyrus: “Well I bet you have a lot to catch up on. To be clear, daddy’s dead!”

Robert: “Where the hell have you been?”

Robert: “Your dear late brother has returned from the dead and you can’t stop texting.”

Talk about dramatic: A flashback reveals that Liam was the first to meet Kathryn at her father’s pub. Robert pulled...