Royals Recap: “In The Same Figure, Like The King That’s Dead”

The only Royal that seems happy these days is Robert because he’s gotten everything back he lost. Meanwhile his siblings have lost everything they previously had. But it wouldn’t be Royals fashion if the younger nobles didn’t do everything they could to cope with their current situations. Did I mention that tigers are involved? 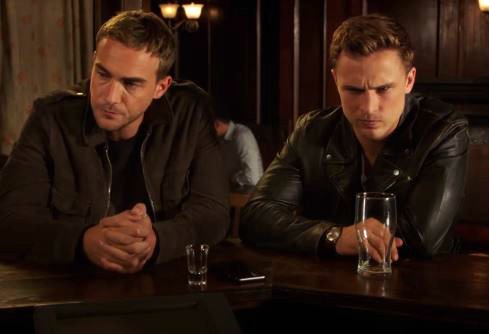 Eleanor’s new bodyguard Rosie has started and on her first day Len takes her to a naked tiger run. Talk about welcoming one into the fold. At the run the princess meets up with her new flirty friend Sebastian. They’re both painted head to toe as tigers, and they’re basically naked. Rosie on the other hand is more conservative and totally rocking her tiger onesie. She’s my new favorite character hands down.

Len and Sebastian shake Rosie and run off to do their own thing. The two end up at a fancy restaurant that wouldn’t let their tiger paint-wearing selves eat. Sebastian didn’t like what he heard so he did what any guy would do and buys the place on the spot and makes everyone eating leave. Where can I find me one of these guys? And once they’re done eating, Sebastian brings out designer clothes for Len to change into. Forget Jasper — I love this guy!

Cyrus is being Cyrus and has brought in a weird birdman who claims he will heal Cyrus’ dark soul and cure his cancer. Never trust a crazy man has a crow on his head.

The healer says he needs the blood of a beast for a ritual so Cyrus attempts to kill a baby fox. He will honestly stop at nothing to live through this season. Naturally, the fox escapes Cyrus’ clutches and he makes Hill hunt it down. Hill tries to keep it together when Cyrus orders him to find the ‘little beast.’

Hill later tells Cyrus he couldn’t find the fox and that the crazy birdman is actually just an orthopedic shoe salesman. The stripper who has become Cyrus’ best friend asks him why he trusted the birdman to begin with. Cyrus told her it’s because he doesn’t want to die.

He also drops the bomb that if he loses the throne, he will kill himself.

Speaking of the throne, Liam apologizes to Robert for the fight. He tells Robert he finally found direction after Robert’s disappearance and it’s been hard giving it back up. It was actually a sweet moment.

After spending time with Kathryn, Robert realizes he doesn’t want to live in the spotlight anymore. He later apologizes to his younger brother and says it shouldn’t matter who was born first, but who would be best for the monarchy. Robert states  it’s obviously not Cyrus, but maybe not him either. Robert says he’ll stand behind Liam as king and the future couldn’t seem brighter. Time to bring back #KingLiam.

Robert and Liam go to Helena together to say that Liam should be put forward as the next king. She straight up tells Liam no. Helena goes on about how it’s Robert’s time and it has always been Robert’s destiny no matter what. Poor Liam. Guess it’s more like #NeverKingLiam.

All this time Jasper has been trying to protect Len. He breaks into the American journalist’s home and tells her to drop the story on him. If she does, he’ll give her a better one.

Apparently his new story is actually Brandon Boone, the guy who claimed to have killed Robert. Brandon goes with Jasper and tells the journalist that Price, who killed King Simon (R.I.P.) hired him to kill Robert. He obviously did a bad job of it.

Liam is back to being sad Liam and is drinking his sorrows away when Jasper shows up for moral support. Jasper tells him to move on because Kathryn seems to have. Liam hates that advice and tells Jasper that Len went on a date with a naked prince and he should do the same.

Their friendship is mean, yet precious at the same time. #TeamLiasper

Hill: “So there’s a fox loose in the palace?”

Helena: “I don’t push people away! Said the queen with no friends.”

Liam: “You give some shit advice sometimes.”

Eleanor: “I had fun today. Thanks for buying me the t-shirt, the clothes, oh and the restaurant.”

It’s Christmas in the palace! Nothing says a Royal holiday affair like drama, booze, heart break and secrets. Blood doesn’t...