For once Chris Harrison is right. This is the most hyperbole episode ever and thank goodness we have Canadian empress and Bachelor analyst Andrée H. to break it down. — Elaine F.

Andrée: Starting out with drama just how I like it. We are right back into the catfight between Corinne and Taylor. I love that Corinne is dishing it out as quickly as she is taking it. This is my favorite part of this show. “You have a like stank face and it’s weird and uncomfortable.” Yes, Corinne, you have made my morning.

Elaine: The Taylor vs. Corinne catfight is ludicrous. Corinne is a beautiful 24-year-old girl with a bouncy house and a mad desire for airtime and a coveted Bachelor in Paradise slot. And Taylor is a beautiful seemingly-mature woman with a mad desire to sabotage her credibility as a mental health counselor. Corinne hasn’t done anything villainous, she mostly just slurs champagne-fueled shit during her ITMs. I’m gonna back up my claims: Josephine gave Taylor some side-eye last week and Raven doesn’t think Corinne did anything to warrant Taylor’s rage.

Andrée: Now Corinne is going to Nick to throw Taylor under the bus. And you tried to say she wasn’t the perfect villain, Elaine. She’s the perfect bratty princess. She should get into sex work if her multi-million dollar family business doesn’t work out. A lot of guys would probably pay her good money to pout and whine at them.

Elaine: Here’s where Corinne went wrong: she shouldn’t have run off to tattle to Nick. Tattletales never last long. Nick is talking to Corinne like he’s trying to calm down a little sister. Nick has been to this rodeo before and he’s played the villain so he is clearly bored. When The grown woman line of the night goes to Rachel: “I hate girl chat, don’t be a part of that. Be focused on the man you’re here for.” Corinne gets the hilarious line of the night calling Taylor “a mean swamp monster.”

Andrée: I’ve never been so on the edge of my seat in a rose ceremony. I was hoping that Taylor would be gone but I guess they want to keep the drama going. The clip of Corinne drunkenly bitching about Taylor then finishing her champagne was reality gold. That’ll be a meme for life. I’m surprised that he booted that chick over Taylor, she was a smoke show.

Elaine: Corinne does deliver the best ITMs. Slurring, tipsy and she always has bedhead. Sex work is a good option, but I also think she could be on a sitcom. As for the rose ceremony: Girl, stop crying. Don’t nobody know who you are. Your sole purpose was to be in the background on a group date. You’re in the back row of the Women Tell All, with what’s her name and the other what’s her name, who went home on the third and fourth episodes.

Andrée: Nick is jazzed about the next place – could it be somewhere amazing? New Orleans. Pretty good. Mr. H just yelled out “Hoes on a plane!” I felt it needed to be added to this conversation. Oh shit, this week is the two-on-one date, you just know that’s going to be Corinne and Taylor.

Elaine: Mr. H is a hero. Corinne is going to chew up Taylor and spit her out.

Andrée: The one-on-one goes to Rachel!!! How ecstatic are you Elaine? 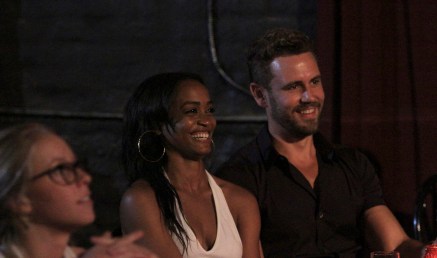 Elaine: Finally! She got the first-impression rose and a group date rose, so I’ve been waiting. Good call wearing that halter, girl. You just gave Nick a lot of bare skin to touch and that was some sexy low-dip kissing. There is a lot of body language going on. Okay, Nick said they have “the most explosive chemistry.” I’m calling final four. I think that’s what he said. With all of that goddam mumbling he does, he may have said: “Mph wlah, stree”.

Andrée: I think she made a good call wearing that low-back bodysuit with those shorts. Mega sexy yet casual. OMG they are doing the Second Line Parade in front the girl’s hotel room. This show is so assholic and I love that. The dancing part of this date looks like actual fun for once. As soon as I said that it switched to them sitting at the table watching a solo singer looking bored out of their minds.

Elaine: Food! It’s happening again! Last week, Corinne was stuffing food in her mouth while she was talking and now these two are eating a beignet and Nick has powdered sugar on his beard. Nick has gone rogue. First Nick told Liz he’s not into the whole “here for the right reasons” thing, now this. I like to think Nick went in all casual and said: “Yeah, so how about we drop some of the bullshit, right now? Let us have some damn food.” Second Line is everything. I gotta say, Nick has some dance moves for a white boy. Browsing the market, strolling the street, beignets, dancing in a little night club and now the visit to the floats warehouse for “dinner.” Okay, Nick is questioning Rachel about what it would be like meeting her father. Uh, is Nick telling Rachel, she’s getting a hometown date? He just said: “I might be breaking the rules here, but I’m super into you.” Nick has gone rogue. That said, I’ve resigned myself to Nick choosing one of the boring ones. I still see Vanessa and Danielle M. for the final two.

Andrée: I’m so excited for this two-on-one. Of course, you know I am rooting for Corinne but fearful The Bachelor audience at large have called for her assassination this week.  Aw damn, we have to sit through a stupid group date first. Though it’s a haunted house so that could provide some entertainment! Nope, pretty damn boring. I hate this date — I’m basically tuned out. Raven said she fell in love with him. OMG. Too early.

Elaine: All I have to say about this group date to a haunted house is do not mess around with spirits. Do not touch the Ouija board. Welp, Jasmine G. don’t say I didn’t warn you, girl when Mama Cecile and Papa Justify come for your ass.

Andrée: Please don’t kick Corinne off, please Nick. She is such good TV and I would love nothing more than for her to win. Just for once, do it for me, Nick. Here begins the most awkward boat ride ever. Looks to me like Corinne is enjoying herself and Taylor looks incredibly miserable. Now we are at a Voodoo ceremony, both girls look miserable. I don’t get why Taylor hates Corinne so much. She’s hot, she’s fun, she’s rich and she comes with a full-time maid. She’s like the perfect woman.

Elaine: Corinne will not win. I know you want that. She’s headed for a fabulous Bachelor in Paradise career. We’ll be able to enjoy her for years to come.

Andrée: I really do not like her (Taylor). She just gives off this “I’m better than you” vibe. Meanwhile, my love, Corinne, is getting a voodoo doll and sticking pins into it. Thanks producers, you made this show so much fun for me.

Elaine: Taylor is a bitch, but not in the fun way, just the mean way.

Andrée:  I wouldn’t be surprised if Nick sent them both home but he should definitely keep Corinne. The suspense is truly killing me. YAAAAAAAAAAAAASSSSSSSSSSSS!!!!!! I am so fucking happy right now. See ya’ Taylor!! Oh, even better they are getting on the boat without her! I am just the happiest girl in the world right now. Pure pleasure. And now they are making out in the boat. Life is good. Thank you, Bachelor gods. Now Taylor has to go through a cleansing ritual. Things couldn’t be better.

Elaine: I like Corinne because she never fails to entertain me, but I want her to go. It’s in her best interest. Bachelor Nation is brutal, look how they wrote so many mean things on Olivia’s Instagram. Go, Corinne. Go. You have a good three seasons on Bachelor in Paradise. Okay, date time. It’s what you’ve been dreaming of: A Corinne and Nick one-on-one. I got my beloved Rachel and you got your beloved Corinne.

Andrée: OMG she pulled out the low halter, leather pencil skirt combo. That accessorized with the rose is a hot look for Corinne. My face is starting to hurt from smiling so much. I know I shouldn’t watch the previews but did they just say they didn’t expect two people to go home on the two-on-one??? Does Taylor come back and torpedo Corinne??? I will be pissed beyond imagination. The Twitter hellfire will come upon you Bachelor if that in fact does happen, believe me. Andree out!

Who in the world would be excited about being on a date surrounded by cow poop? Poop that you have...