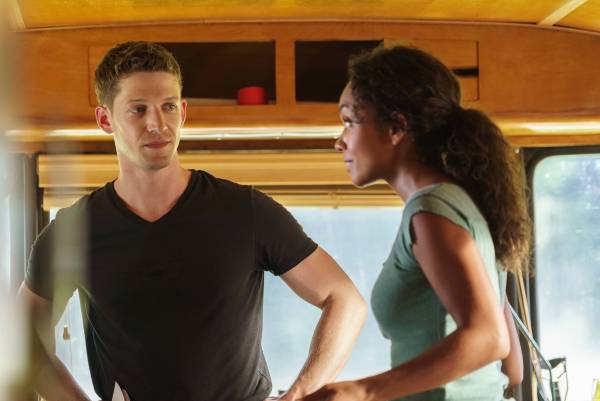 Did you notice that Sleepy Hollow presented a show inside a show with the “Whispers in the Dark” episode? Fans campaigned for more of Lyndie Greenwood’s high-voltage Jenny Mills and took a liking to Joe Corbin, a favorite character though he only appeared in one episode. The writers made the welcome decision to bring back Zach Appelman as a series regular and pair Joe and Jenny.

Jenny, the knockout who will knock you out, plays backup to Ichabod and Abbie. Though she hasn’t had a storyline of her own, Jenny is never extraneous. She is as schooled in artifacts as Ichabod, every bit the action girl as Abbie and the sole member of Team Witness with access to shifty characters who might prove useful.

In the season’s second episode, the writers didn’t include Jenny in the primary plot, which was fine. Ichabbie needs a lot of “just us” time as they deepen their relationship. Jenny starred in a subplot with Joe at her side. The S3 premiere, “I, Witness” introduced new viewers to Jenny’s area of expertise: “I spent years recovering obscure artifacts from all over the world. This is what I do.” It’s clear that Jenny has underground connections, Asked about Captain Irving’s absence she feigned ignorance, yet hinted, “But someone probably helped him leave. Someone who knows how to get in and out of countries quietly. Someone who’s been getting around the law ever since she was young.”

Cementing Jenny’s relevancy is her complex relationship with her sister, Abbie. Jenny also shares a sweet friendship with Ichabod. Crane and “Miss Jenny” are alike in that they are both adrift without a battle against evil; it’s what they were trained to do. Agent Grace Abigail Mills, on the other hand, is a star rookie at the FBI. Abbie never wanted this ghostbusting life; she prefers law-enforcement, and her weapon of choice is a standard-issue pistol. No, Abbie, shooting at wraiths doesn’t work, but we adore the fact that you try.

Enter Joe. Appelman made a favorable impression on viewers, which is an epic feat — especially for a newbie. Actors have to keep up with the top-notch primary players. Sleepyheads are a choosy lot; if you’re in the opening credits, you better dazzle, or there will be hashtag shade. I’m predicting that Joe won’t turn out to be a dreaded Scrappy-Doo.

Appelman and Greenwood exhibited chemistry ( I hesitate to use that word because I’m not trying to launch the #Morbin ship.) Like Jenny, Joe also has a meaningful connection to the series, he’s Sheriff Corbin’s son. The Sheriff nurtured Abbie’s law-enforcement career and Jenny’s work to combat evil forces. After his death, Corbin’s files and audio recordings on the occult guided the Witnesses. Jenny and Joe have both been envious of Abbie but have come around. Joe even wanted to emulate Abbie by attending Quantico. It didn’t work out; he’s an EMT. That’s just as well, the show only needs so many agents and Abbie’s got all the office space, which she richly deserves.

Wasn’t it touching when Joe and the Exposition Fairy turned up at Jenny’s place with a photo of the sheriff and mentioned that she was like a daughter to his father? The show jumped right into the plot; Jenny’s trailer was ransacked. We got a little banter:

Joe: You know, whoever did this, it doesn’t look like a B and E. It’s more like they were searching for something?
Jenny: That’s very astute, Encyclopedia Brown.

An intriguing character, Randall Martin (Anthony K. Wyatt, who played Sam in “Sanctuary“) spied them from the trees and then tailed Joe in a random Parking Garage of Suspense. The scene, filmed like a crime thriller, looked different than classic Sleepy Hollow. Randall rendered Joe unconscious, stuffed him in the trunk and cuffed him to a tree to get Jenny’s attention. The felonious fellow has a past with Jenny, referenced her work with Sheriff Corbin and demanded that she hand over the Shard of Anubis. Jenny gave it to him and also delivered a Sarah Connor-style ass-beating. He threatened to come back if the shard is a fake. We need more Randall. It’s cool to see a presumably human baddie on the show. Raise your hand if you want to see Jenny go on independent missions, which will surely be of value to Ichabbie at some point.

Th episode highlighted parallels in the Mills Sisters lives. We finally saw Abbie with a residence befitting a leading lady, and we also discovered where Jenny lives. She resides in a trailer on the outskirts. It’s not impressive like Abbie’s home, but it suits Jenny’s off-the-grid lifestyle. Did you notice the similarities near the end of the episode? Ichabod was on the porch with a drink in hand for a heart-to-heart talk with Abbie; Jenny and Joe sat on lawn chairs outside her trailers with beer. Both sisters are thinking about where to go from here.

Lyndie Greenwood could carry a Sleepy Hollow spin-off but 1. we don’t want her to leave series because the Mills Sisters are a dynamic duo and 2. Sleepyheads already have enough anxiety fighting to keep Sleepy Hollow on the air.

That said, it would be fabulous to see more of The Jenny & Joe Show.

Thoughts? We love the witty and thoughtful comments from Sleepyheads. They don’t appear right away, but we’ll get to them.

Thanks to Pandora's monkeyshines, Abbie investigates a death and Crane accompanies her. At the scene, they run into Agent Daniel...