Gotham Recap: “How The Riddler Got His Name”

Gotham is back after the winter hiatus and things seem to be rather subdued, for Gotham City anyway. Ed Nygma has a bit of an identity crisis. Jim Gordon takes some time to reconnect with family. And young Bruce Wayne gets in to an altercation, while trying to find his lady love, and ends up seeing double. It’s just another episode of the average insanity for those who inhabit Gotham-town. 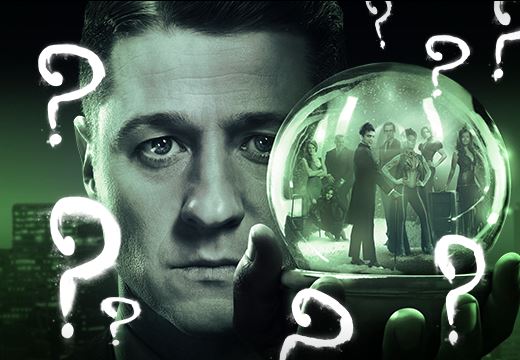 As things get underway we find Ed Nygma in the middle of a killing spree. Having appeared to kill Penguin as revenge for the murder of his beloved Isabella, Ed seems to have gotten a homicidal craving that he just can’t satisfy. Now he seems to be in the mood to dispense with folks whom he considers to have high IQs. If they can’t come up with the correct answers to the riddles he poses a disappointed Nygma does away with them. He also manages to make the deaths look like either accidents or suicides. It seems this is Ed’s way of trying to find himself. If he can find the person who can solve the riddles he poses he believes that person can help him become a proper villain. Well, that is certainly logical. It’s the type of logic that has members of a certain political party following a big orange windbag because they believe he’ll help them achieve world domination. Yeah, it’s REAL genius.

During Nygma’s down time he consumes little hallucinogenic pills and then indulges in strategic conversations with his dead pal Penguin. In these psychotic episodes they discuss Ed’s current state of mind and then plan his next move. Ed soon realizes that he needs an enemy, rather than a teacher, to help him achieve his goal. “The greatest villains have always been defined by the men who try to stop them,” Ed tells an imaginary Oswald. Of course there’s only one guy for the job: Jim Gordon. Ed plans accordingly.

All of this, of course, does not escape the ever-watchful eyes of the Gotham P.D. However Gordon’s not the one who begins to connect the dots of the murders. He’s taking some well deserved R&R. Nope, this time it’s Lucious Fox who picks up the criminal trail and brings the killings to the attention of Harvey Bullock. Bullock isn’t having it. He’s still trying to clean up from the chaos that Jerome caused and he’s also trying to locate missing Mayor Cobblepot. But Nygma will not be denied. He sends clues to his future crimes to Bullock and Fox using singing messengers. He next targets chess master competitions. When Bullock and Fox arrive on the scene a hidden Ed starts killing off the chess masters with electrical shocks. Somewhat disappointed that Gordon didn’t respond to his clues, Ed seems to be more than satisfied when he finds that Fox has taken Gordon’s place. Fox finds Ed’s next set of clues on the bottom of some chess pieces and they lead to a phone conversation between the two, though Fox doesn’t yet know he’s dealing with Nygma.

Nygma’s next little escapade involves attacking the G.C.P.D.’s cadet class graduation and taking Bullock hostage. He thinks that this will help him finally discover his true self and give him an identity that will strike terror into the denizens of Gotham. Yet it won’t be that easy. When Fox finally figures out what’s going on and shows up at the graduation ceremony he finds Nygma there threatening to kill Bullock if Fox can’t solve Ed’s riddles. Nygma gives Fox three tries. Of course, in an effort to ratchet up suspense. the first two fail. This predicament has Bullock dangling over the railing of a staircase facing a very lethal fall. If Fox can’t solve Ed’s final riddle Ed will cut the rope holding Bullock in place, leaving the detective a somewhat colorful spot on the floor several stories below. In the usual nick of time, Fox solves the riddle BUT the rope breaks. Again, in the usual nick of time, Fox lunges out and grabs Bullock saving him from the plunge. This gives Nygma time to make his getaway.

The Court of Owls is becoming more active. Katheryn and Frank Gordon discuss plans to bring Jim Gordon into the fold. In the meantime, Katheryn has trained the Bruce Wayne clone to impersonate the real young millionaire and she sends him out into the world on his mission.

Gordon joins his uncle on a hunting trip and Uncle Frank takes this opportunity to begin his attempt to get Jimbo to join the Court. Frank begins to explain the mission of the Court and he also tells his nephew that both he and his brother, Gordon’s father, were members at one time. Frank says he wants to get all this off his chest so that he can make things right between himself and Jimbo. It seems the Court came between Frank and Gordon’s father. Frank just wants Gordon to know the truth about what happened. He tells Gordon that the Court was, at one time, trying to strike a balance of power in Gotham for the good of the city. When this all started to go wrong Gordon’s father left the Court and began to oppose it. This caused the split between the brothers, Frank tells his nephew, because Frank stayed in the Court. The Court eventually caused Jimbo’s father’s death. They set it up to look like a car accident. Jimbo even witnessed the whole thing as a child yet he had no idea it was a set up. Frank then tells Gordon that the Court doesn’t want to harm him, they want him to join. This news doesn’t exactly hush Jimbo’s puppies. Frank apologizes to Jimbo for his actions after the death of Jimbo’s father. He then tells Gordon that together they can bring down the Court. Gordon just needs to trust him.

Stately Wayne Manor is just a hive of activity these days. Alfred continues training young Bruce in the finer arts of combat. He notices, however, that his young charge’s mind is not completely in the game. Although Bruce initially denies it, Alfred correctly surmises that the young lad is having a bit of girl trouble. Bruce is still smarting from the rebuff Selina Kyle gave him after he tried to ‘shield’ her from the fact that her mother wanted to con Bruce out of some money. Alfred gives Bruce a note from Selina saying that she wants to see him. After initially refusing to see her he gives in and goes into the city to find her.

While waiting for Selina to show, Bruce runs into a bunch of young thugs who proceed to rough him up and try to rob him. Selina shows up just in time to bring things to a halt. With the baby goons watching she and Bruce have a small row bout things past and Selina tells him that she didn’t send the note requesting to see him. She then tells him to get lost and exits stage left. The goons then take up where they left off with Bruce. They get in a few good punches at the lad, but then the tables turn. It seems that Alfred’s training is paying off. In the quick round of fisticuffs that ensues we definitely see the shadow of the Bat as Bruce quickly deals out an efficient ass whipping to the four young ‘toughs’. He then repairs to a nearby alley to contemplate his situation, where he meets some unexpected company: The clone. Surprise, an injection is administered to Bruce’s neck and he’s knocked out. Alas, things look grim.

The clone returns to Wayne manor to begin his mission for the Court. After a cheerful exchange with Alfred, it looks as though he’s off to a good start however there’s just a small hint that Alfred may not think that all is well. Bullock and the Strike Force conduct a raid on Cobblepot Manor looking for Nygma, who of course is not there. Instead they find Oswald’s portrait spray painted with a big green question mark. Meanwhile Ed confronts Fox and explains that he just wanted the cops to play his game. Ed then explains to Fox why he killed Penguin and then thanks Fox for helping him to find himself. “So who are you now?” Fox asked. “Oh come on Foxxy,” Nygma replies before taking his leave. “I’m The Riddler!”

Meanwhile, in an undisclosed location in the city, Penguin is still alive and being cared for by Ivy Pepper. She tells him that he’s been out for quite a while. Penguin quickly realizes what he has to do. Back at the Court, Frank tells Katheryn that things with Gordon are proceeding to plan. When he asks about her endeavor and the whereabouts of Bruce Wayne she smile in the affirmative. Next we see young Bruce coming to in a prison cell. The cell window has a view of a snowy mountain range. It seems young Mr. Wayne is a long way from home.

On Gotham Jerome’s rampage produces a bit of foreshadowing. Ed Nygma and Penguin express their true feelings for each other....