Okay, any episode that opens with an axe-wielding Jessica Lange reenacting scenes from Strait Jacket (Joan Crawford’s 1964  B-movie campfest) gets my vote for best installment of any show ever. There’s something indescribably sublime about seeing talented actors painstakingly recreate sheer crap (albeit wildly entertaining crap).  And when Feud reconstructs, they get it right, down to the wallpaper. 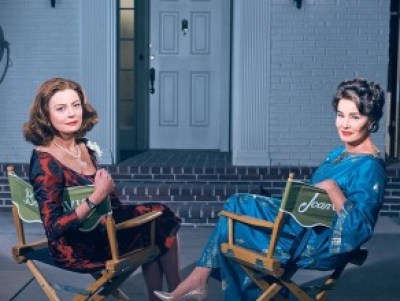 What emerges in Episode 6  is just how many feuds are actually in the air at once. Bette wants Joan dead for campaigning against her in the Oscars. Joan wants Bette’s blood for being nominated in the first place. Studio head Jack Warner wants to keep director Robert Aldrich in a state of eunuch-like subservience, but Aldrich is tired of serfdom. Meanwhile, the erstwhile-devoted Mamacita is fed up with having vases flung at her head every time Joan has a bad day, and offers an ultimatum. One more vase and she’s out of there.

Finally, we have Bette and Joan wrestling with the industry and the evolving movie-going public itself.  The industry—in its carnival barking way, wants to reduce the success of Whatever Happened to Baby Jane? to “hagsploitation” formulas in which, to paraphrase Warner, you take a former female movie legend freshly tumbled from her pantheon, and desecrate her in a degrading format designed for viewers to see both character and actress suffer. “Tear down your idols…this is very satisfying to an audience,” he muses.

Power surges are the motif of Feud—everybody’s in a wrestling match grappling for more control. And at the end of the day, what they’re all trying to get is respect, And the only reason they can’t have it is because no one trusts each other enough to take off the gloves. It’s a house of cards (and an O. Henry-worthy irony).

After the aforementioned series of painstakingly reenacted previews for Strait-Jacket, along, with a howler of a scene depicting a typical promo tour appearance with William Castle (John Waters—who else?) we’re off and running as Aldrich woos Bette and then Joan (in a brilliantly cross-cut scene) into agreeing to reunite for one more round.

The Emmy noms practically fly off the screen as the montage gives Lange and Sarandon ample opportunity to shade their characters (Lange especially), and highlights just how well this thing is written. Really, Feud could have been half as good as this and still qualified as quality entertainment.

Anyway, filming for  Hush Hush Sweet Charlotte gets underway, but not before another scathingly brilliant face-off between Warner and Aldrich, who has come to give Jack the kiss-off. He’s just signed with Warner nemesis Daryl Zanuck to make Charlotte for 20th Century Fox instead of Warner.  “I’ve come to get my balls back….hear ‘em clankin’?” gloats Aldrich. “Give me back my cigar!” sputters a wounded Warner.

Next thing you know, creepy Hedda comes a-calling at Crawford’s house with the glad news that someone’s got hold of a “blue movie” featuring an actress who looks an awful lot like pre-Hollywood Joan. She wants an exclusive quote, but Joan’s more interested in having a chat with the sure-fire source of the rumor—her traitorous brother Hal, a washed-up tried-to-be-actor, now unhappily employed as a hotel clerk. Joan tries an economy pay-off but Hal wants more. We find out that Hal was Mama’s favorite and Joan was the daughter no one wanted. A lifetime of  bitter rivalry is indicated—yet another “feud”.

Then Aldrich’s wife Harriet—fed up with the back of his head—asks for a divorce. Another great speech:  “You never stopped having a life. I don’t know when I lost mine. But I’m getting it back…only not with you.” Molly Price delivers the haiku-like farewell speech with artful weary restraint. It’s a resignation AND an emancipation, with flickers of all the repressed messiness and exhilaration that both words imply.

Meanwhile, on a Baton Rouge Plantation, Bette and Joan have agreed—once again—to a temporary truce, but tempers flare as they both steamroll Aldrich (and then each other) in twin efforts to gain control. The point is not that they are difficult people just to ruin your day. They’re fighting not to be made into clowns by the men who are calling them “hags” behind their backs. Who, if anyone, will triumph?

Can they finish Charlotte without killing each other? Will Joan throw another vase at Mamacita? Will Hal’s sudden death (spoiler alert–he dies undergoing an appendectomy) halt the release of the dreaded blue movie? And most importantly, will Joan’s bank be able to stop payment on Hal’s blackmail check before his estate can cash it?

The answer to these and other questions in Episode 7.

Up until now, the fireworks have all been of the “may have” and “was rumored to” variety, but it’s really,...