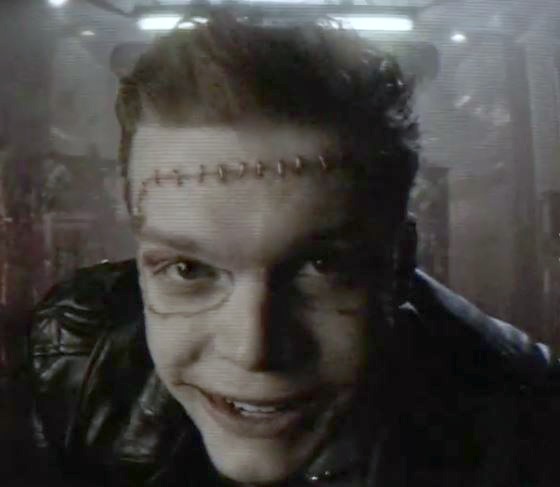 Oh Lawd! Instead of the usual can of krazy they decided to let loose a butt-load of chaos in Gotham-town this week. I haven’t seen this many nuts running around since the inauguration. Sorry there were actually more nuts in this week’s episode. Anyway Jerome’s rampage produces a bit of foreshadowing. Ed Nygma and Penguin express their true feelings for each other. And a relative, with connections, shows up at Jim Gordon’s door. The hijinks await, shall we.

At the end of last week’s story Jerome blew up a power plant and left the entire city in the dark. As things get going this week the city is literally under siege from Jerome and his band of looney toons. Gordon, Harvey Bullock and the GCPD are struggling to get things under control. Needless to say they’re having about a much success as the trump ‘administration’ is having trying to get folks to fall in line with its program.

While the city burns two mysterious figures watch the events unfold. One of these is Katheryn, a powerful figure in the Court of Owls. The other is a man we haven’t met yet. Katheryn considers whether or not to have the Court take a hand in the situation. The gentleman advises against acting to hastily. “Give the GCPD a chance,” he says. “Your faith in him is touching,” she replies. Hmmm.

Back at the precinct Gordon is serious about finding Jerome. He’s the key to all this. It now seems that not only Jerome’s goons but ‘regular’ citizens are starting to get into the act. Gordon questions Lee Thompkins to see if she has any idea where Jerome might have gone. She was the last one Jerome talked to before he left the station. She tells Jimbo that Jerome mentioned something about going to kill Bruce Wayne. Gordon heads out for stately Wayne manor telling Lee to phone ahead and warn Alfred.

As the phone rings at the manor Jerome makes his entrance. His goons knock Alfred out and hold Bruce captive as they ransack the joint. They find the owl statue that Bruce and Selina lifted from the Court’s stronghold. During the ensuing ‘discussion’ the statue gets broken. Aww, looks like we may not find out what that hidden diagram referred to. Jerome then announces his plans to kill Bruce, simply because that’s the last thing he remembered wanting to do before Theo Galavan shut his lights out last season. When Bruce refuses to cower and beg for his life Jerome backs off for a bit. In an effort to buy time Bruce convinces Jerome to give him a more ‘public’ send off. The idea appeals to him, so Jerome agrees. As they exit he orders the remaining goons to kill Alfred. Gordon shows up and he and Alfred feed hot lead to the remaining thugs. Then it’s off to find Bruce.

It seems that Jerome has commandeered a carnival for the evening’s events. It comes complete with all those sideshow games that everyone likes. However, these games use human targets and quite a few of the targets get themselves perished during the evening’s events. If Jerome really is going to be Gotham’s version of the Joker then this episode establishes the beginning of the relationship between Batman and the Joker. The dialog between Bruce and Jerome does a decent job of this. It even shows Bruce’s steely resolve as Jerome shoots staples into his arm.

Gordon, Alfred and Bullock arrive at the carnival ahead of their back-up. Of course they go in without waiting for the other cops. Inside Jerome has Bruce handcuffed to a stake and points a huge cannon at him. All of this, of course, goes on in front of a live audiences full of Jerome’s sycophants. While Jerome loads up the cannon Bruce pulls one of the staples out of his arm and uses it to begin picking the lock on the handcuffs. This demonstrates that the writers are still adhering to the basic mythology of the Batman. The comics made many references to the time and effort that Bruce Wayne put into the study of locks and how to pick them with almost any object that was handy. Gordon and crew bust in at the opportune time to create a distraction that aids Bruce in his effort.

Finally free, Bruce lures Jerome into the hall of mirrors while the cops clean up Jerome’s thugs. Obviously a confrontation ensues in the hall. After a bit of cat and mouse through the maze there’s a considerable amount of the rough and tumble and Bruce gains the advantage. It appears that all that training has paid off because Bruce quickly gets the upper hand and delivers an admirable beat-down to Jerome. (The Joker never was much at fisticuffs. The Batman always gave him a sound ass-whipping.) This ‘first’ time though it looks like Bruce might lose control and go too far. But he manages to stop just short of killing Jerome. He then comes out of the maze to find Alfred there alive. The reunion is temporarily halted as Gordon attacks Jerome, who comes out of the maze, and literally knocks his face off. After that the situation quickly comes under control.

Back at stately Wayne manor Alfred and Bruce discuss the evening’s events. Alfred applauds the control Bruce had over his anger. They talk about the fine line between justice and vengeance. Bruce begins to realize that there will be rules that he will have to follow in his quest to battle crime. The seeds of the Batman have been planted.

Meanwhile it seems that the Court now has control of the Bruce Wayne doppelgänger that came out of Indian Hill and they have plans for him. What those plans are remain a mystery, for now.

Thinking that his beloved Ed Nygma is in mortal danger, Penguin rushes to the rescue only to find when he gets there Ed’s not the one in trouble; Penguin is. When Ed appears unharmed Penguin is relieved and overjoyed to see him. That rapture is quickly put in check when Ed pulls out a pistol and dispatches the two goons that Penguin brought along as backup. Shock and surprise crosses Penguin’s face as he declares that he doesn’t understand what’s going on. “That’s been half the fun,” Ed tells him. He then shows Penguin the wrecked car in which Isabella was killed. Nygma’s now taking his revenge. It’s looking like curtains for Oswald.

Nygma straps Oswald to the wreck and then points out a giant vat suspended over the car. It contains highly corrosive acid. The acid is held in place by a chain anchored by a block of ice. Ed lights a fire under the block of ice. The fire melts the ice and that releases the chain which then dumps the acid on the wrecked car. Oh yeah, the acid will get dumped on Oswald as well. Holy fricassee Batman! During all the preparation Oswald confess his true love for Ed but that only infuriates Nygma and he scoffs at Oswald’s declaration. He then exits stage right leaving Oswald with his thoughts.

As the ice melts and the acid starts to dribble on to the hood of the car near Oswald a night watchman happens through. They do have an annoying habit of doing this type of thing don’t they, these night watchmen. After a short discourse Oswald gets the guy to free him.

Penguin heads straight home where he encounters Butch and Tabitha who immediately overpower him. They have to wait for Barbara Keane to show up so they can finish off hizzonor. Rather than wait they head for her club.

Once there Babs and Penguin have a conversation about how they can benefit each other. Penguin figures out that Babs, Butch and Tabby plan to do away with Ed so they can rule Gotham’s underworld. Penguin then refuses Babs’ request to call Ed so they can kill him. Ed then comes out of the shadows and Oswald realizes that they were all in this together. Still he continues to profess his love for Ed. Ed’s not moved.

The scene moves to the docks where Oswald stands with his back to the river and his front to a gun that Ed is holding. He tries for the last time to convince Ed that they need each other but Ed isn’t having it. He pulls the trigger and Oswald falls into the river. As he falls his face has a shocked expression plastered on it. It’s not unlike the expression that comes over trump’s face when he’s confronted with an inconvenient truth but then, let’s face it, for trump any truth is inconvenient.

As Jimbo relaxes with a drink after a tough day at the office a visitor arrives at his door. Upon answering it Gordon greets the man, his Uncle Frank. Frank is the same gentleman who had been conferring with Katheryn earlier in the episode. Well now, yet another interesting development.

Fox claims that this episode is the winter finale. It seems that when the show returns in April the focus will be on the rise of the Riddler. Guess we’ll have to wait in breathless anticipation until then.

On Gotham, Dwight fires up the movement for Jerome. Oswald gets home help that he really doesn’t need and Selina...