Motherhood is especially tough for women on Extant. This week, Special Contributor Tracey M. tells us about how the alien paternity spree is affecting Molly and others. If you’re just catching up, you should see Tracey’s previous recaps. – David F. 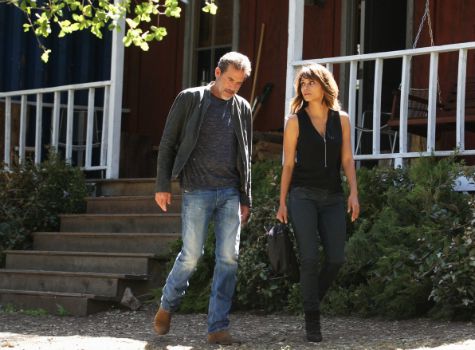 In the fourth episode of this fast-moving sci-fi drama, Ethan is more determined than ever to find out who Molly is. He still sees flashes of her face and hears her voice. Late one night, he projects pictures of Molly through his data banks. He pages through them, fascinated by her face. Julie’s got to work on that override program.

Lucy (Kiersey Clemons), the defiant new Humanich, is also up late. She and Ethan look over his images together. She urges Ethan to be a soldier like her and go on his first “mission” to find Molly. Charlie catches the two still powered up, and insists they shut down for the night. Early the next day, Ethan sets out on his scooter, his mission begun. Soon Charlie realizes Ethan is missing, and questions Lucy regarding his whereabouts.

Lucy laughs, and searches her data banks for all encounters with Ethan. She tells Charlie there’s a woman named Molly that keeps flashing in Ethan’s consciousness, and he has gone to find her. Charlie tries locating Ethan through his GPS, but Ethan sees this, and shuts it down (he was after all, built to have superior intelligence!) He finds his old home, but it’s just a burned-out shell. There’s a red identification sticker on the house, and the information on it leads Ethan to an apartment complex where he hopes to find Molly. He is lost, and asks two drug dealers where the apartments are. They tell him the complex is right around the corner, but not before stealing his scooter.

Charlie and Lucy set out to find Ethan. Lucy recognizes Ethan’s scooter, now in the possession of the two goons. She asks where the boy went, then expertly incapacitates the larger of the two. You don’t fool with Lucy! His friend smartly decides to hit the bricks before suffering the same fate. Charlie is grateful Lucy’s such an ass-kicker —  she saved his bacon! They keep searching.

Meanwhile, Molly is still shaken by Adhu’s visit and the shooting that followed. We get to see that once her vision cleared, Molly realized she’d shot General Toby Shepard instead of Adhu. Turns out he was shielded by his bulletproof vest – phew! Toby is sore, but okay. He’s aware of Adhu’s increasing power, and forgives Molly, knowing she was the victim of Adhu’s illusions. He’s just glad she was able to pull the trigger.

Toby has hired a team of genetic codebreakers and has asked Molly to assist them. She works with codebreaker Nate Marone (Michael Gladis) to try to create a virus that will destroy the aliens. Molly easily manipulates the database on Nate’s screen into recognizable patterns. Nate is stunned by Molly’s abilities, but left speechless as she wanders out of the lab, seemingly dazed (those pesky alien spores again). It is night as she wanders into a fast-food restaurant, and sits next to a solo diner. She flirts with the poor, unsuspecting guy, and we fade to black, knowing where this will lead.

The sound of JD pounding on her door startles Molly from her sleep. As she turns over to get out of bed, she realizes she’s naked. With dread, she turns to see a smiling, naked stranger sleeping next to her (don’t you just hate when that happens?). She is horrified, wakes the guy and tells him to get dressed and do a dash of shame out the back door. As she puts her robe on to answer the door and runs her fingers through her hair, she notices her nails are long. Didn’t she just trim them? Is she losing time, or her mind?

JD has come to ask for help with his daughter, Kelsey (Lyndon Smith). Since her parents’ divorce, she and JD have not had much of a  relationship. JD feels he hardly knows her, but she is pregnant, scared, and asking for his help. The government has set up Healthy Baby Clinics all over the country, urging women three months pregnant to get screened for the EVH789 virus.  Kelsey is frightened by these broadcasts, but JD knows Molly can perform and analyze the blood tests without government interference. Molly draws a sample from Kelsey, but she takes off on JD’s motorcycle to find a Healthy Baby clinic once Molly leaves as she doesn’t doesn’t entirely trust her father or Molly.

Meanwhile, Toby is working with Agent Velez and the Virus Team to find a way to stop the alien invasion. Women all over the country have been impregnated by Adhu (He IS the father, says Maury Povich, over and over again). Velez questions Toby for wanting Molly’s help. She wonders if Toby was shot on purpose, so Molly could protect her son. Molly returns to the lab to speak with Toby and assure him she’s fine (she is so not fine). She mentions that there is a message in the spores that she can hear. While others hear static, she insists the spores are saying,“help me.” Velez isn’t buying it, but Shepard comes to Molly’s defense.

Ethan has found Molly’s apartment, and goes inside. He looks around awhile and soon spots a box of photos. On top, there is a photo of him with Molly. He begins to have flashes of his past life with Molly, and his present life with Julie. It’s all too much for his system, and he shorts-out again. Poor kid has some of the worst pre-teen angst, ever. Charlie and Lucy find him passed out and take him home to bed. Charlie texts Julie to discuss Ethan’s flashbacks, but she’s distant; not the hot and heavy all-over-Charlie Julie. He’s’ starting to feel used by her.

Later, as JD tenderly watches his daughter sleep on his couch, Molly is home, showering off the day’s events. As she steps out of the shower, she sees her nails are long again. The stream clears, she looks into the foggy mirror, not knowing what’s going on with her. On the mirror is a message for her: “ETHAN WAS HERE”.

Will Molly be reunited with Ethan? How dangerous might this alien-killing virus be to the spore-ridden Molly? Can the invasion be stopped by a Humanich army?

Watch CBS’ Extant at its new time Wednesdays at 9/8c

Our Special Contributor Tracey M. tells us all about this week's “Extant”, in which Halle Berry's Molly really ratchets up...