It’s not looking very good for Molly and maybe all of humanity on Extant. Is there a bright side? Well, our Special Contributor Tracey M. sheds a little light on the question in her latest Extant recap. Read on! 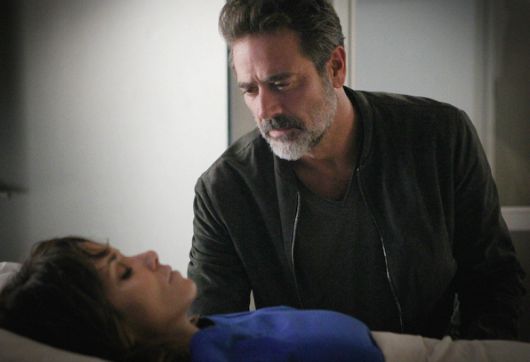 When we last left our heroine, Molly, she had just turned herself in to General Toby Shepard and collapsed into his arms like an overheated southern belle. Now hospitalized at the infirmary of the Global Security Commission, Molly is weakening rapidly, and Nate Marone is frantically working to find a cure for the virus. Toby is desperate to save Molly. He didn’t realize the virus would hurt her; unfortunately it was created too quickly to have an antidote.

As he stands by her bedside, Molly tells him to use her to study hybrid evolution. She wants him to see the hybrids the way she does, without fear. She tells him the human race isn’t worth saving, anyway (wait…what?!) as she lapses in and out of consciousness.

The GSC lab has hybrid bodies to dissect and study. Nate zips open a body bag; Terra is inside.  Just before he has the chance to use his bonesaw to start the exam, he is called away by a growling stomach and a hungry co worker.

Now that Molly has turned herself in, JD is free to leave, but Toby needs information from him.

JD agrees to talk to Toby only after he has seen Molly. Toby agrees, and takes him to her. JD sits down next to Molly’s bed and takes her hand. He tells her how much she has changed his life; he says he’ll never be the same again (sniff, sniff). Toby is listening just outside, and notices how tender JD is toward Molly. He tells JD he has a bottle of 25-year-old scotch in his office, and the two sit and drink as they begin going over the details of the attack at the compound and the visible effects of the virus. JD berates Toby for launching an attack against a species he doesn’t understand. He asks him point-blank if he killed John Brown. Toby denies any involvement, John was his friend! He lowers his voice; there are those who out-rank him that leave no fingerprints. (Hmmm…sounds like Anna Schaefer to me!)

Back in the GSC lab, Nate prepares to resume his examination of Terra but she’s no longer on the table. She has shed her juvenile body for a larger one. That of an awkward teen.

Her old hair and skin are scattered about the floor like so much discarded snakeskin. Rising from the corner, Terra (Genneya Walton) faces Nate head-on, eyes glowing.

At the robotics lab, Julie and Charlie are having a hard time explaining Lucy’s shutdown to Fiona Stanton. Fiona knows that humanichs were created with the will to survive and sees no problem with Lucy’s behavior. She sees no other way to fight off a hybrid invasion. Julie wants to suspend the program altogether. All of the new humanichs have Lucy’s algorithms and will all be defiant.  Fiona curtly advises both of them to work out any glitches and stay on course. (What a bitch! – and she was so sweet with Ethan!)

Meanwhile, Terra is out of the morgue and on the move through the GSC. Her eyes glow, and security guards do her bidding. You know, that wouldn’t be such a bad power to have. She has the security gates opened, and frees our angry hybrid Ares, and three other mature hybrids. As they board the elevator with the guard’s consent, Ares turns to the young man, and has him shoot himself in the head, just for the hell of it. He has lost patience with peaceful solutions. Adhu is dead, Ares is in the house now!

Molly is weak and unconscious when Julie comes to bring Ethan to see her, per Toby’s request. Ethan has even had his memories restored. Julie goes in alone first, and tearfully apologizes for all that she’s done. She swears to Molly that John never stopped loving her, and Ethan’s memories were erased because he was in so much pain, and she regrets what she allowed John’s humanich program to become. She admits she may be responsible for John’s death – that’d wake me up!

She brings Ethan in and then excuses herself to call Charlie and tell him to shut down the program. He reminds her they could face jail time if they go through with it. Julie is aware of possible repercussions, but is compelled to do the right thing. Molly is fading fast. She has awakened on the other side of the white light, but part of her hears Julie.

She is at a carnival with her father, Quinn (Louis Gossett Jr.) She is a little girl again. As she and her father walk the fairgrounds, she sees Nate Malone, a carnival barker. A little further away, and it’s Toby Shepard, happily juggling for the crowd. (I know…and Toto, too?)

Little Molly (Cassidey Fralin) realizes she has lost her father and runs to look for him. She finds him in a corner, being intimate with their neighbor. Upset, she calls him a liar, and sees a flash of John’s face (spooky). She runs away from Quinn and finds a tent with a hand-crank viewer right in the center. She turns the crank, and images splash across the inside of the tent: Molly, giggling with John, Molly with Ethan, Ethan with John, JULIE with John.

Toby and JD continue to talk and match each other drink for drink. Suddenly, there is an alert: Code Red in the GSC. The hybrids have been spotted. Back at the robotics lab, just as Charlie is about to begin the shutdown process, he receives the Code Red. Toby places a tense call to Charlie; all humanichs have been deployed immediately by the GSC, even though Julie and Ethan are still in the building. All staff are moved to a secure location, and Molly must be left unattended.

Back at the carnival, Molly is drawn to a brightly lit ride in the center of the fairway. Her father begs her to forgive him, to forgive John and not board that ride. Molly steps through the turnstile but immediately wants to turn around and get off. It is too late. On this side of the dream, Molly Brown’s vital signs have flatlined.

Is Molly really dead, or just “playing possum” like Terra? Will JD and Toby continue their bromance?  Stay tuned!

It's more than man vs. more than alien on this week's Extant. Special Contributor Tracey M. takes us inside the...