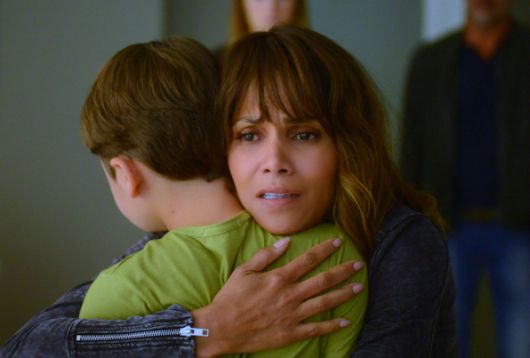 Molly is good and angry after finding Ethan’s message in the steam of her bathroom mirror.  She now knows he’s out there somewhere and is desperate to find him.  Unable to reach JD by phone, she takes a ride over to his place to tell him what’s she’s found.  Meanwhile, JD is spending some long-anticipated alone time with his lady-friend, Iris (Tehmina Sunny). She is less than pleased when they are interrupted by a knock at the door. It’s Molly, seeking JD’s help. Iris, tired of being interrupted by JD’s job, takes a hike.

Back at Molly’s place, the Artificial Intelligence that runs her home has no record of the last 24 hours. Unsure how this has happened, JD runs a fingerprint scan of the mirror.   The only set of prints that come up are those of Charlie Arthurs, Julie’s lab assistant.

Back at headquarters, Sheena Velez (Necar Zadgan) and General Toby Shepard look over the latest stats.  Across the US, there have been 58 pregnancy-related deaths, which means there are approximately 58 untraceable hybrids lurking. Sheena is worried about Toby. She remembers when they would talk of raising a family and leaving their stressful careers behind. Toby tells her they are at war, and she is insane to want to back out now. She’s offended. She tells Toby she thought “insane” was what he was into these days. (Ouch!)

At the robotics lab, Lucy performs a virtual-reality combat scenario flawlessly, much to the delight of Anna Schaefer. Julie is still unaware that Charlie has not installed compliance limiters, as she asked. Lucy begged Charlie not to change her: she doesn’t want to lose her free will. Anna tells Julie of Ethan’s adventure where he shut off his GPS and searched for Molly. Anna feels Ethan may now benefit from a compliance limiter.

Julie is at her apartment, expressing extreme displeasure with Charlie because he failed to tell her about Ethan. She felt Charlie made a fool of her in front of her superiors in part by not telling her about Ethan running away. As he feebly tries to reason with her, (get some backbone, Charlie!) there is an announcement: they have company. Molly and JD are at the door, and Molly wants answers. Julie tells Molly there’s a restraining order. Molly sees Ethan standing behind Julie and ignores the order, running over to hug him. He realizes he does know her, but is not sure how. Molly demands to know what Julie has done to Ethan. Julie summons the police, but not before Molly snatches her up by the collar and pushes her up against the wall. (Go, Molly!)  JD gets Molly to leave before the cops show up.

Back in his car, he asks about the series of events leading up to Ethan’s “relocation”;  John’s death; Ethan now being government property, and Molly’s stay at Restwell. She and JD listen to John’s last voicemail. JD thinks it’s all too much of a coincidence and agrees to investigate further at Molly’s insistence.

At Julie’s apartment, Ethan is pissed, he asks why she changed his memories of his mother. Julie says Molly was sick and couldn’t care for him. She says she made the changes to spare him further pain.  Julie tries to hug him, but he angrily pushes her away, and goes in search of his big sister, Lucy. (chip off the old block!)

Angry Molly storms into Toby’s office, asking why her son was placed with Julie, and why John is dead. She knows she is his best hope of finding the virus, and uses this leverage to try to get Ethan back. Otherwise, she’ll become Toby’s worst nightmare, going to the press and exposing everything. As she is leaving, her vision blurs, and she staggers toward the elevator. (I sense another fugue state approaching.)

JD obtains the vehicle data recorder from John’s car, and seeks out his old friend (Richard T. Jones) to help him decode it. His friend laughs at him, knowing he’s working so hard because it’s for a woman. JD argues weakly, and the two read the data from the disc containing the manual override of John’s car.

Ethan and Lucy bond. Lucy says that any reprogramming should be illegal, and that Julie is a liar and can’t be trusted. They place their trust in each other, and decide to be an army of two.

Toby takes a meeting with Anna Schaefer, and the head of Homeland Security, Fiona Stanton (Kate Burton). They must find a way to continue the work they have started.  She requests a meeting with Ethan, Julie and Molly. Julie’s upset, and fears that she will lose Ethan. Charlie tries to comfort her, but she kicks him out. (Instead of pining for Julie, Charlie oughta be packing his bags!)

Molly sits at home, drinking and looking through old pictures of John. JD calls and reassures her that she is not alone. She begins to cry, unable to help herself. JD tells her he’ll be right over — he’s a bit whipped, too, I must say.

Fiona Stanton sits and talks with Ethan. She is delighted by his humanity and intelligence. Ethan tells her Julie feels like his mom, but he knows Molly is really his mom. He understands Molly was erased from his system, but still feels the impression she left. He states that he can feel pain, but unlike humans, he’s unable to cry.

Late that night, Toby comes to Molly’s to let her know that he feels awful that Ethan was taken from her. He has arranged a meeting with her, Julie, Ethan and Fiona Stanton, to help her get her son back. Molly starts to black out, and begs Toby to leave before it’s too late – but he doesn’t and the the two kiss. (see, told you there was a horny fugue state coming right around the corner!) JD arrives just in time to see them in each other’s arms. They have a bad habit of interrupting each other!!   Toby is angry to see JD again, especially after warning him to stay away from Molly. Molly wakes at 9, wearing a little black dress, and a club-stamp on her hand.  She rushes to make her meeting with Fiona and Julie.

Fiona interviews both women. Julie and Molly are at each other’s throats, throwing accusations at each other. Claws are out for this catfight! Molly accuses Julie of killing John because she couldn’t have him. She mentions videotape proving the affair while Julie counters that Molly had trouble bonding with Ethan early on, but Molly fires back that she and John resolved that issue. Julie mentions the time spent in space, away from Ethan, insinuating Molly’s lack of involvement with him.

Meanwhile, JD’s friend has found information on the vehicle data chip from John’s car. They follow his journey from the lab, to the train tracks, where he was killed. There was an encrypted outgoing call from Julie, 10 minutes before John’s death!

Lucy convinces Charlie to take her out to lunch. She asks Charlie if Julie has mentioned the limiters again. She feels her free will makes her a better soldier. Without another word, Lucy walks away from the table, in pursuit of a hybrid. With a butter knife, she takes him out easily, and efficiently, barely drawing any attention to herself. This is her first independent kill, and she is proud.

Back at headquarters, the heated meeting between Fiona, Molly and Julie has settled down. Fiona determines that Ethan is more than property. He is a thinking, feeling being, and she feels he should be afforded the same treatment. She deems it is in Ethan’s best interest to rebuild his bonds with Molly and be returned to her custody. (in your face, Julie!) Molly sheds tears of joy, while Julie sits there, looking lost. She asks Molly if she’s even capable of caring for a child in her condition. As Molly sits and talks with Ethan, Julie is pulled into a meeting where she’s congratulated by Anna on Lucy’s first hybrid kill.

Toby decides he must end his relationship with Sheena Velez. He can’t give her the things he promised, or what she needs. His kiss with Molly obviously stirred up some old feelings.

On her way home, Molly is stopped by the faceless stranger she encountered during one of her “blackouts”. He grabs her arm, but is suddenly distracted by a vision of his deceased mother across the street. As Molly’s eyes glow gold, he walks toward his mother, and is struck by a car. The man gets up and runs away, but not before JD witnesses it all. (He can’t stay away from her!) He asks what happened, Molly’s pretty sure she’s the culprit.

Molly has her son back, but does Ethan still have Molly? She’s on the brink of insanity now, the spores slowly working on her mind. Will she become one of them? And when will Charlie grow a backbone? How will Julie fill her days without Ethan?

Motherhood is especially tough for women on Extant. This week, Special Contributor Tracey M tells us about how the alien...