This season of Extant has been packed with surprises, says Special Contributor Tracey M. This week’s double episode amps up the action and begins to reveal new alliances among the characters. – David F. 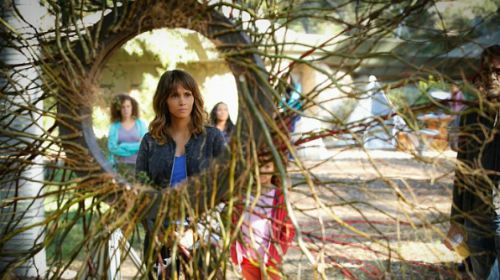 Molly wants to study her DNA further via bone marrow biopsy, but refuses to be tested anywhere that will keep a record. Lucky for her, JD was a triage medic in the military. Molly bears the painful biopsy, then realizes she’s late for her meeting with Ethan. On her way out, JD cautions her to be careful because no one at the Global Security Commission can be trusted now, especially not General Shepard.

Molly asks for a few minutes alone with Ethan, which Julie grudgingly obliges. She then tells Ethan that she is sick right now, and can’t care for him. She promises him she will get well and will be back for him. For now, he is to stay with Julie, as she loves him and will take good care of him. Julie is grateful for the endorsement, but is still unnerved by Ethan’s change of attitude since Lucy’s introduction.

JD’s phone is full of missed calls: it’s his daughter Kelsey, trying to get in touch with him. He races home to find his ex-wife Dorothy (Melina Kanakaredes), not Kelsey, waiting for him. JD is berated for letting his daughter down again by missing her first pregnancy ultrasound. Kelsey has returned the keys to his house by way of her mother.

Walking into the GSC, Molly is reminded of JD’s warning to her. Toby runs into Molly in the hall, and whisks her into his office with some news. The anti-hybrid virus is ready for deployment, thanks to her work with Nate Marone (Michael Gladis) in the GSC lab. He pours them both a drink, and toasts Molly’s success. A suspicious Molly is less than thrilled. 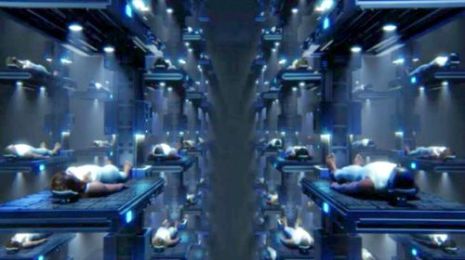 Anna Schaefer is thrilled and requests 100 new battle-ready humanichs. Julie is waffling, not sure she should bypass the protocols John put in place when he started the program. (Oh, just do it, Julie, you know you have no backbone!) Anna insists and Julie thinks back to another upsetting conversation she had with Anna. When the government took over the lab, John refused to go along with their ideas, and wanted to shut down the entire humanichs project. Julie begged him to stay, promising they could continue their work and their relationship. John yelled “there is no relationship.” (Wait? Whaa…?) Afraid, she called Anna, hoping to keep the program alive. Twenty minutes later, John is dead. So, 100 humachs? “Yes, Miss Anna!”

Julie asks Anna if she had anything to do with John’s death. Anna insists it was an accident, and states that accusations and conspiracy theories can have repercussions. As she and Ethan depart, the elevator they’re in goes out of control, hurtling first toward the roof and then plummeting almost to the ground. She is badly shaken; Ethan is unfazed. As they exit the elevator he turns his head, and uses his robotic powers to close the elevator doors. Later that evening, a grief-stricken and frightened Julie sits by Ethan’s bed sobbing, while one of his “spiders” watches.

After meeting with Toby, Molly tries entering the GSC lab. Her security code is no longer accepted, and she’s denied access. Uh-oh. Nate is surprised to see Molly, and thwarts her efforts to access the alien spores. He calls for security, but a little convenient mind control, and Molly’s free again. On her way out, she phones JD.

After ditching all traceable objects: phones, cars, electronics, they meet outside an old garage on the outskirts of town. It belongs to JD’s friend and they take off in a gunmetal Porsche (cause JD clearly knows how to roll), with Molly trying send a psychic message to locate her son. I think it was something like, “you better be in before that sun is down!”

Actually, Molly wants to find Adhu and get his DNA for comparison and find a way to stop the virus, which she fears will spread and kill her.They drive to a high elevation, light a fire and spread a blanket waiting for a signal from Adhu.

While reminiscing about their lives, and growing closer – oh, c’mon, kiss already! – Molly suddenly sits up, alerted by some cosmic noise. It’s Adhu, and Molly knows his location. She and JD wander for hours until they locate the compound, deep in the woods. They meet a young girl, named Terra (McKenna Roberts), a hybrid that says they have been waiting for Molly’s arrival. Adhu welcomes Molly “home”, and she meets many other hybrids.

Adhu agrees to give Molly a DNA sample and wants to show her his world. He grasps both her hands, and she sees stars, swirling  galaxies, happy beings, then a burning, dying planet. She now understands why the aliens are here: for survival. They are assimilating to their new environment and evolving. Pregnancies no longer risk the life of the mother (phew!); they never intended to hurt anyone. Molly now wants to study this evolution, not destroy these peaceful beings.

At the robotics lab, Lucy gladly allows Julie to upload her algorithms to program the new humanichs. Lucy is delighted that they will all be just like her. Ethan has been occupying his time  building small spider-like robots with cameras. He shows Lucy and she is delighted, encouraging him to build an army of them. She tells Ethan that lies are part of human DNA, and his little spiders can watch what happens when humanichs are powered down.

At the start of this episode, Sheena Velez is interviewing a young mother from Asia at the GSC. Through an interpreter, she tells Sheena how her baby was born quickly, then grew quickly. She believed he was special, and a gift to her. She says he was called away by voices. Her nails began to grow quickly and she suffered blackouts.

Sheena now realizes that the alien threat is global and needs to alert Toby. Meanwhile, Toby gets into his car where JD is waiting the back seat with a gun. They drive to meet Molly, who proposes peaceful coexistence with the hybrids. Toby can only see the threat they pose to the human race. Molly pleads with him, reminding him that she lied to Congress for him, and she’s prepared to come forward with the truth if need be.Tell him, Molly!

She and JD give Toby 24 hours to give his answer. After ditching Toby, the two head to JD’s weapons shed (what, you don’t have one?), and stock up on self-defense supplies.

Angry and scared, Toby returns to the GSC, where Sheena finds him and tells him of her interview with the Asian woman. The new mother has been tested, and she too has the triple-helix DNA. They discuss experimenting on returning her DNA to normal, even though it would probably kill her. General Shepard has no problem with this; if she is a hybrid, she’s lost her human rights.   He heads into the elevator, up to the secure global database. There the data show an area with a different thermal reading than its surrounding area – possibly some sort of shielding of thermal images, hiding the hybrid compound (a la Harry Potter).

Shepard calls for a 72-hour Red Alert due to a viral threat. Dr. Molly Woods, and war veteran JD Richter are named as terror cell leader. See, they shouldn’t have given him all that time to think.

Back at the robotics lab, Lucy and Ethan eagerly await the awakening of the first of the new humanichs. Julie is away, so Charlie is running the lab. Lucy names the new humanich Lucas (Patrick Johnson). Lucas has the same data as Lucy and the two chat like old friends. Ethan feels a bit left out, but Big Sis tries to make him feel included. Suddenly, the emergency-lockdown alarm sounds.

Molly and JD return to the hybrid compound to warn Adhu and the others of the imminent danger. Adhu is upset; he doesn’t want to hide anymore. Another hybrid, Ares (Cleo Anthony) aka the angry young hybrid mistrusts JD and Molly, and says humans can decide whether to live or die among the ever-increasing hybrids. He is ready to stand and fight. Speaking for the group, Adhu agrees not to make any moves until the 72 hours have passed.

Toby, determined to flush JD out, has Kelsey arrested. JD decides he must ready himself to leave the compound and save his daughter as soon as he can.

Charlie manages to get his small group out of the lab and back home through special clearance. He takes Lucy and Ethan back to Julie’s apartment. Lucy slyly asks for a bedtime story, knowing Julie keeps the book they’ve been reading, among other things, in her nightstand. Hey, who doesn’t, right?

When Charlie looks into Julie’s nightstand to retrieve the book, he comes upon her picture cube. He sees photo after photo of Julie and John together. He had no idea, and now feels more used and lied to than ever. He decides to have a few drinks. Late that night, Lucy comes to Charlie, and asks him questions about Julie and John. Charlie becomes more upset, and Lucy seizes the moment to try and seduce him. She starts kissing Charlie and removing her clothes. Charlie, able to stop himself, pushes Lucy off, but not before they’ve been seen by one of Ethan’s “spiders.”

The next day, Lucy and Lucas are deployed to observe the location of the hybrid compound. JD leaves to help his daughter, and he and Molly bid each other a tearful farewell. Still no kiss for those two! As JD leaves the compound, Lucy and Lucas look on. Lucy has a clear shot on Molly, but Lucas reminds her that this mission is for observation only. The two quickly subdue an unsuspecting hybrid, and load him into their vehicle to take him back to the GSC.

Mission successful – the hybrid compound has been located!

Is this really farewell for JD and Molly? Is there any way to combat General Shepard’s virus? Can Molly and the peaceful hybrid race coexist among humans? Why is Ares so damned angry?

Stay tuned to this action-packed story – I know I will!

Special Contributor Tracey M. recaps the most recent Extant for us and shares some thoughts about Molly Woods' ever-growing anger...