There’s big trouble for the human race as the humanichs are taking orders from a higher power on this week’s episode of Extant. TVRD’s Special Contributor Tracey M. takes a look about what was important in this Extant episode. 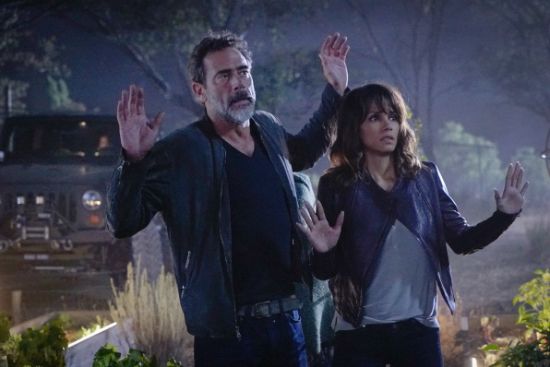 At the GSC, head of Homeland Security Fiona Stanton is on the warpath. It’s been attacked and she’s hungry for revenge, challenging anyone on her staff to step up if they’re not as pissed as she is. She asks them if they understand, and they all nod a bit uncomfortably. She orders them to “quit nodding their stupid heads” and answer her. Damn.

Soon after, Fiona is upstairs with TAALR, (the Threat Assessment and Algorithmic Research computer–doesn’t that acronym just roll of the tongue!) hoping for an update on the current hybrid threat. There are delta-wave sensors across the U.S. 52 states to detect any hybrids. Fiona asks if there’s a full report on Toby’s death. TAALR warns that she may be putting herself in danger by seeking answers. Fiona isn’t satisfied with anything (get some coffee, please) and storms back to her office.

At Julie’s apartment, Molly and Julie help Ethan pack some of his belongings. He’s going home with Molly, at last. Julie is tearful but Molly promises her that she will always be a part of Ethan’s life as well as hers. She’s ready to put the past behind her. Molly and Julie embrace before. Molly and Ethan head to the bunker.

They have some of John’s belongings from the office he shared with Nick Calderone (Keith David) and Molly searches through them to for any information on this elusive man. Ethan is sitting and playing with an interactive chess board. Wow, the future looks cool. Suddenly, Ethan notices that someone is on the other side of the game, using a binary code to send a message. Molly remembers fondly that John used to encode things for her to find all the time. She used to have a program to decode the messages, but hybrid Molly can understand them herself. Ethan helps by sending a message of greeting. The chess board responds with the location coordinates of the user. Could it be Calderone?

The location is fifty miles away, and Molly gets ready to leave with Ethan. JD isn’t going to let Molly go without him, but she’s afraid for him. She keeps seeing the vision of a mortally-wounded JD, a silver amulet, and a gun slipping from her hand. JD insists that he’s going with them. He tells Molly she can go all golden-eyes on him if she wants, but it’s his choice to try to protect her.

Julie pays a visit to Fiona Stanton. She wants Fiona to know that John Brown encoded a message into Ethan in the event that humanichs kill humans: Nicolas Calderone needs to be contacted if this ever occurs. Lucy steps into the room. She clarifies, “One human killed.” Fiona states that Nate Malone was a hybrid-sympathizer and Lucy acted appropriately. Fiona thanks Julie for the algorithms in Lucy and the other humanichs. She’s decided to make Lucy the head of her personal security team. Fiona plans to change things in the lab, too. She wants humanichs working there, fulfilling the demand for thousands of new humanichs. Fiona snipes, “They don’t call in sick, they don’t get tired, and best of all, they don’t question orders.” She suggests that Julie do the same before dismissing her. Fiona’s really in quite a snit, isn’t she?

Julie heads to the lab. She’s greeted by Charlie Arthurs who came in to find the lab being run by humanichs. They are assembling humanichs at an alarming rate. Charlie can’t imagine thousands of Lucy’s out there! One is bad enough. They devise a plan to implant Lucy with a data recorder to find out who’s giving humanichs their orders. Charlie sets up a “date” with Lucy to celebrate her promotion to head of security. They plan to meet at the lab later that evening.

Molly and JD follow the GPS coordinates to a seemingly deserted field. Ethan points out a number of dead birds, and Molly throws a stone to reveal an invisible shield. How cool is that? There’s an old phone booth there, and Molly punches numbers into the dial pad revealing Calderone’s house.They walk toward the house, led by a shotgun-toting Frankie (Shelley Robertson), Calderone’s humanich. Nicolas recognizes Molly and Ethan right away. Once inside, he explains why he and John created TAALR. Once the government took over, TAALR’s decision trees constantly expanded. Now TAALR is running its own agenda, including killing John, and taking over the humanichs. Molly asks Nick about the amulet, he hopes it is truly TAALR’s “kill switch.” Nick offers Molly, JD and Ethan a safe place to spend the night. Molly and JD cozy up in JD’s tent under the stars – they finally make love—after eleven episodes! Calderone sees their entwined silhouettes, and sneaks into Ethan’s room. Molly and JD’s afterglow is interrupted by Ethan’s screams. They rush in to find Nick with Ethan. He explains he was just trying to find Ethan’s speech translator. Turns out Frankie has aged and lost her ability to speak. Ethan offers to help using parts from one of his robotic “spiders”. It works. Frankie speaks to a grateful Nick for the first time in years.

Back at the robotics lab, Charlie and Lucy enjoy their “date” by candlelight. Charlie says he’s developed a data chip to enhance the sensory experience of humanichs. Intrigued, Lucy lets him install the chip in her neck and the two kiss. The next day, Charlie and Julie log into the humanich database in search of this “higher authority”. Just as data starts to download, the screen goes dark. In another part of the lab, Lucy’s eyes open and she agrees to “take care of the problem.”

Later, Lucy finds Charlie to tell him how excited she is; one thousand humanichs will be shipped all over the world the next day, and she can’t wait for their next “date.” Charlie calls Julie about the shipment. Julie asks Charlie to get enough thermite to destroy all of the new humanichs as soon as possible. Charlie agrees, unaware Lucy is eavesdropping. Lucy’s a wily one!

Meanwhile, on the way to his safety deposit box, Nicolas explains that he and John created the amulet as a “worm” to infiltrate TAALR and the humanichs program. He hopes it’s what they need. He retrieves the amulet, exposing himself to facial recognition. He hands it to Molly before he is forced to surrender to the authorities. Molly sees them take him away as she and JD drive off. Frankie watches Nick go, too, and walks away.
Charlie returns to the lab to discover all the humanichs are already shipped. Lucy is there, and tells him she knows he has been playing games with her. She says she has a game of her own. “Find Julie.” She’s hidden Julie in a container. The internal display indicates a ninety-percent oxygen level. Julie screams, but she’s tucked away where no one can hear her.

Will Julie be found before it’s too late? Have we seen the last of Frankie and Nick? Will Fiona’s head finally explode?? Stay tuned for next week’s 2-hour season finale!

So, last time out, it looked like our heroine, Molly Woods was extinct on Extant. What happened on the latest...