It’s more than man vs. more than alien on this week’s Extant. Special Contributor Tracey M. takes us inside the conflict at the heart of this episode. Be sure to catch all of her Extant recaps. – David F. 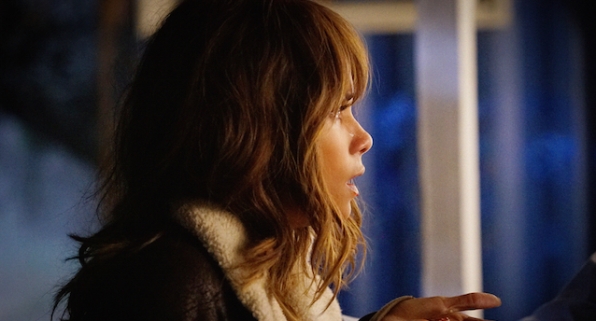 When we last left Molly at the hybrid compound, she was bonding with her son, Adhu, and a young hybrid named Terra. Just as JD is driving away, he hears the low rumble of helicopters headed toward the compound. Adhu is also alerted by the sound of the copters, and learns from Ares that Helios (Jamaal Hepburn) is missing as he’s been taken by Lucy and Lucas. Ol’ Angry Ares wants to stand and fight. What power could these puny humans have against them, anyway? As the humanich army approaches, the hybrids stand as one, and use golden-eye on the army.

Problem though. The army continues to approach and Molly remembers Ethan talking about his sister Lucy, the soldier. These soldiers aren’t human! Molly screams at the group to run. They scatter as the soldiers fire dozens of virus-filled smoke-bombs. Molly can’t find Terra, and runs inside to see if she’s there. Lucy follows close behind. She aims for Terra and fires her gun. Molly jumps in front of Terra to shield her, but is hit in the shoulder. Lucy lines up for a kill shot on Molly, but is taken out by our returning hero, JD “Boomerang” Richter! This man shouldn’t say goodbye anymore, it means nothing!

As the smoke-filled canisters release their poison, there are more and more hybrids dying on the ground. Adhu is shaken by all the casualties, but hopeful that some did manage to escape. He is bleeding from the nose, and clearly suffering the effects of the virus.

Later, at the robotics lab, Julie and Charlie try to repair Lucy. Julie regrets that John’s humanich program has been misused this way. She feels as if she’s dishonoring John’s legacy. Ethan, concerned for his big sister, Lucy, is at her side. He questions Julie about Lucy’s injuries. Humans and humanichs aren’t supposed to hurt each other; that was what he was taught. He tells Julie that Lucy said all humans are liars and can’t be trusted. He warns Julie that he hopes she is trustworthy.(fresh kid!)

JD drives Molly and Adhu to his house. He is once again greeted by his ex-wife, Dorothy. She’s seen the broadcasts about JD and Molly being part of some terror cell, and is scared now that the GSC has taken Kelsey. She is a judge, and can’t understand why her ex is part of this scandal. She follows JD into the bedroom where Molly is tending to a deteriorating Adhu. When Adhu spots the judge, his eyes glow gold. Dorothy panics and grabs JD’s gun off the dresser. She points it at Molly, then Adhu. Molly uses mind control to get Dorothy to release the gun. Dorothy is scared and confused, and flees the room.

JD explains that Adhu is Molly’s half-alien son, and the reason they’re on the run. Dorothy thinks JD should turn them in to the GSC to get Kelsey released. JD has other plans. He wants to turn himself in. Molly also wants to get into the GSC to get equipment that could save her son’s life. She asks a frightened, suspicious Dorothy to watch over her son while she’s away. Dorothy reluctantly agrees, but soon learns what a peaceful, gentle being Adhu really is (aww, a hankie-moment)

At the robotics lab, Charlie is repairing Lucy. She discovered that all humanichs have an expiration date. John wanted them programmed to have the full human experience. She wants her expiration date removed. Clearly she’s the type to just let that bottle of milk hang around the fridge just a little bit longer. If not, she threatens to tell Julie that Charlie never installed her limiters and shows Charlie video of the two of them together the night before. Charlie asks where the video came from, but Lucy just laughs. Looks like Charlie is Lucy’s puppet now!

Molly tracks down Nate Malone at a local eatery and sits at his table. She asks him to look under the table so he will be sure to see the gun aimed at his gut. Molly needs equipment from the lab to try to reverse the plasma damage to the hybrids. Nate tells her there’s no way to reverse the virus, but one doesn’t say no to Molly Brown. At the GSC, JD turns himself in to Toby, and asks for his daughter’s release. Toby interrogates JD, and asks where Molly is. JD tells him Molly is dead, because he chose to kill what he didn’t understand. Molly is dead, Toby is responsible, and JD berates him for destroying the hybrid compound.

Molly returns to JD’s house to find Adhu very weak, and significantly older. She hooks him up to the blood-cleansing apparatus, and thanks Dorothy for caring for her son. Dorothy receives a call from Kelsey, who’s now safe at home, then helps Molly take Ahdu outside; he wants to see the stars. He thanks Molly for all she tried to do to help their species, and with his last breath warns her that Ares and Terra are out there somewhere and can’t be trusted. Dorothy comforts Molly, who first begins to cry at the loss of her son, then begins to cough up blood. The virus is now starting to work on her.

Charlie decides to come clean with Julie and shows her the video that Lucy wanted to use to blackmail him. He also tells her Lucy refused to have limiters installed. Julie is livid. Humanichs aren’t supposed to be non-compliant. Charlie admits he got drunk after seeing Julie’s pictures with John. She tells him she has no pictures with John. Lucy has just manipulated him and is now dangerous. They devise a plan to shut down Lucy who they now know is dangerous. Ethan has one of his robotic “spiders” record the whole conversation, and then sends it to Lucy.

Julie and Charlie arrive at the lab with Ethan in tow. They send all staff home. Ethan steps up to protect his sister, but Charlie takes him aside and explains why Lucy has become so dangerous. As Julie prepares to start the humanich shut-down process, Lucy hops off the table and begins to strangle her. Julie’s losing consciousness as Charlie rushes in to help. Lucy swats him away like a gnat, and bears down harder on Julie’s windpipe. Ethan rushes over and unplugs Lucy’s programming database. Lucy slumps to the floor, and a relieved Julie thanks Ethan for saving her life.

Back at the GSC, a very ill Molly Brown has turned herself in. She collapses into Toby’s arms, asking for his help. Toby is devastated by what he has done. Seems he’s just one of many who are sweet on Molly.

Will JD be released? Is it too late for Toby to help Molly? What’s the future for the humanichs?

Tune into Extant next Wednesday on CBS at 9/8c

This season of Extant has been packed with surprises, says Special Contributor Tracey M. This week’s double episode amps up...