In this episode of “Extant, “Morphoses,” or as I prefer: “Fun with Molly” our new Molly (co-executive producer Halle Berry) is strong, smart, sexy, sassy, and sometimes shady! 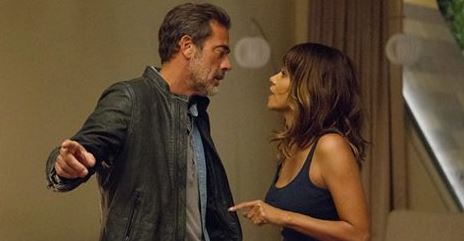 At the Global Security Commission, General Shepard (David Morrissey) commands a mission to surround and kill Molly’s half-human offspring. Still very much alive, he is now a dangerously powerful adult. Their weapons and combat gear are futile against this alien intelligence – silly humans! As the general watches his mission fail, his command to abort comes too late. Later, as he leaves the memorial for his fallen soldiers, it is brought to his attention that Molly is out of the Restwell facility as a material witness in a homicide investigation.

Meanwhile, JD (Jeffrey Dean Morgan) is planning to drive Molly back to “Crazy Acres,” as she insists the homicides are actually the deaths of alien-impregnated women. Honestly, that’s the kind of story that does tend to get one locked up. Still, Molly knows the half-human fetuses grow at an alarming rate; all of the crime scene photos show formerly-pregnant women with gaping holes in their abdomens.

JD advises Molly to take her meds and stop talking about little green men (JD clearly needs to freshen up his alien references). She reminds him he has no other leads, and proceeds to dump all her pills in the road. Molly wants a clear mind for what’s ahead of them.

Back at the Lab, the U.S. government has now completely taken over the Humanichs Program; it aims to re-program Humanichs into defense weapons. Rather than abandon years of research and work, Julie (Grace Gummer) stays at the lab and works under government supervision. Don’t judge, jobs are hard to come by! One huge perk — she now gets custody of Ethan (Pierce Gagnon), as he is government property. When she and John created Ethan, Julie fantasized they were a family. John’s inconvenient marriage to Molly made that impossible. Julie feels slightly vindicated that Ethan now lives with her — after all she did take a shovel to the face for showing up at John’s funeral.

Though not human, Ethan is in pain over losing his parents. He believes that he will eventually be reunited with his mom. Julie tries to cheer him up, but he’s hostile and uncooperative.

JD asks Molly how she knew the victims were pregnant, welp, there is that tell-tale hole in their abdomens. The pair visit the obstetrician of one of the victims, and he confirms that her fetus was indeed growing too quickly. The doctor mentions a colleague who has a patient with the same complications. JD and Molly visit the woman, Zoe, and Molly tries to warn her that she’s in danger. Zoe’s baby is growing too quickly and she has hallucinations of lost loved ones, the same symptoms Molly experienced and is clearly spooked.

JD is ticked off by Molly taking the lead. He wants to take her back to “Restwell”, but she bargains 10 minutes for a shower at her house and it’s an offer he can’t refuse.

She comes downstairs, tousled, beautiful, and bearing two drinks (guys this isn’t going where you hope it is). A few sips in, JD knows he’s been drugged. JD should know better than to take drinks mixed by beautiful strangers.

Molly heads out to find Zoe. The women speak, but Zoe ends up tearfully running off. Molly tries to go after her, but is stopped by an excruciating pain in her head and distorted vision. Trance-like, she wanders into a strange bar, and has an encounter with a nameless stranger. Fade to black, and Molly awakens in the woods, being watched by a half-human little girl. Molly loses consciousness again, and wakes up in her bedroom. She and JD -who doesn’t seem to hold a grudge after getting roofied- try to find Zoe again, but learn she has died of an abdominal hemorrhage.

Back at the lab, Ethan overhears Julie say that he doesn’t know that he’ll never see his mom again. He retreats to a space under the stairwell and begins overheating his core, in an effort to self-destruct. Julie finds him, and he shares he can’t handle the human emotion, pain. Julie decides to override his programming and  takes him home. When he awakes in the morning, Julie is at his bedside. Ethan turns to her and smiles. “Hi, Mom,” he says. Mother’s Day is going to be trickier than ever for this kid.

Welcome to our new guest contributor, Tracey M! Tracey has been following Extant and gives us the lowdown on what...