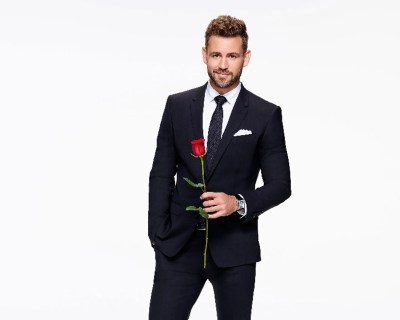 It’s only two weeks in and The Bachelor is already brimming with all the things we love: the ladies being shamed, shameful or shameless. This week, the show started on a cruel note, for the first group date, r, contestants had to pose in wedding gowns. Just getting their hopes up. This type of artistry is best broken down by Canadian ambassador and Rose Ceremony analyst Andrée H.–Elaine F.

Andrée: Wow the previews are making it seem like this is going to be an epic episode. It hurts me that I am back to watching previews but when Nick is involved, how can I look away? Things are starting off with a group date, which are never my favorite especially at the beginning when you really can’t tell any of the girls apart! The group date is a photo shoot; I am guessing that will be the reason for the face slap shown in the previews! It’s extremely awkward when they force them to wear wedding dresses. Everything about this photo shoot screams desperation.

Elaine: And so it begins. “How dare Corrine act sexy and get the first kiss. The tramp is trying to get Nick’s attention so she can stand out from the pack! She’s so selfish. Why isn’t she focused on the feelings of her fellow contestants?! She doesn’t know what Nick wants.”

I can’t wait for the annual warning that she’s “not here for the right reasons.”

Andrée: This bridal photo shoot is serving up a big ‘ole batch of gingivitis. There are smooches happening everywhere. Yes, Corrine. Take that top off. That’d be exactly what my beach wedding would look like. I love this girl so much. I am so happy she won the photo shoot. Completely deserved. Side note: I think Nick got a vocal coach because his lisp is much less noticeable this season.

Elaine: I still hear mumbles. Here we go! This is the: “Is it okay if I steal you?” group-date segment. Nick’s thinking: “Oh, right. This is mandatory, someone must be rude to get extra time with me. Whom did the producers cast as the constant interrupter? Oh, hi Corinne! And right on cue, she gets the date rose because it will vex, the other girls. I can’t stand the misuse of “literally” but this is literally Nick’s career. He is a seasoned Bachelor franchise professional.

Andrée: Nick should have saved these girls some trouble and tweeted what he wants: be aggressive, interrupt dates, get naked, have sex, etc, etc. Corinne needs to be careful not to turn into a Lace. Lace went from hot to not instantly due to time hogging. Oh dear, Corinne is going in for a second steal. This is quickly veering into Lace territory. Danger, danger!!! Nick seems to be loving it but that will change once all the girls start taking their one-on-one time to complain to Nick about Corinne. When that day comes I will be angry, as per usual. 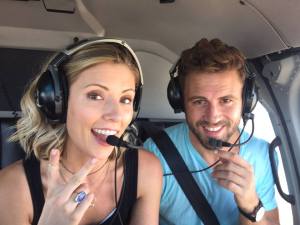 Danielle M. got the first one-on-one with Nick
ABC

Elaine: Okay calling it now, Danielle M. They’re both from Wisconsin, she fits the Bachelor prototype. A vanilla girl with a high-pitched baby voice, who will not get entangled in house drama. That says last-woman standing. Either that or The Bachelorette. Since I’m overly invested in this, I want Mumbles to make the right choice and live happily ever after. I wish I could say that with a hint of irony, but no, I am serious. I want to see the televised wedding. That’s a lie, I don’t want to sit through three hours of that. I’d also like a spin-off which I also will not watch. Okay, time for Danielle’s requisite sob story: Oh, her fiance OD’d. That’s it. She’s the winner. Let’s go on with this farce in which he has to pretend to be falling in love with other girls. My fortune telling is subject to change, but I’ve had the same prediction for two weeks. Nick’s mumbling drives me nuts, he always sounds like he has something in his mouth, maybe that’s how they roll in Wisconsin. If he picks Danielle M. they can mumble happily ever after.

Andrée: Nah, a dead fiance is too much baggage. Plus, how do you not know your fiance is an addict? Screw that girl, she talks funny and has a terrible hairstyle. I can’t get down with her. I had to rewatch that date three times because it kept putting me to sleep. Though everyone I don’t like wins, so she probably has a good shot at his heart. You are right though, the more Nick drinks, the more his speech impediment comes back with a vengeance.

Elaine: I just want to clarify that I’m not Team Danielle M. but I can’t count on Nick to pick the girl I like. I’m basing this on the type of girl we always end up with. Liz and Nick’s one-night-stand secret is exposed during a play-acting session on a group date: “Hi, Nick, I’m supposed to be taking part in some goofy acting lab, but I’ll talk about our one-night stand right now. That’s clever, right? It’s like acting, but I’m not. Ha-ha.” That was an ambush. There is something wrong with Liz. Even with producer monkeyshines, she’s going along with this storyline: “After we hooked up, you never heard from me again, but I saw how cool you were on Bachelor in Paradise. I changed my mind so I can be on TV just like you!” It’s hard to tell when they are acting sometime, but Nick’s irritation with Liz seemed genuine. So, since she’s an attention whore, I guess she’s going to Bachelor in Paradise, huh? Oh, no it’s 9:48 and there is no angry confrontation or sobbing! I’ve been robbed. I spoke too soon, he’s pulling Liz aside. Dump her, Nick! He knows she ditched him in real life and then got interested in him because he was cool on BIP. Ludicrous! Dump her! Yesssssss! Bitch, bye. That was so hasty, the producers didn’t have time to send her to the airport in a car so she doesn’t even get a chance for a limo cry. They never have purses, Liz is hitchhiking home. She’s planning to see what Juan Pablo is up to. 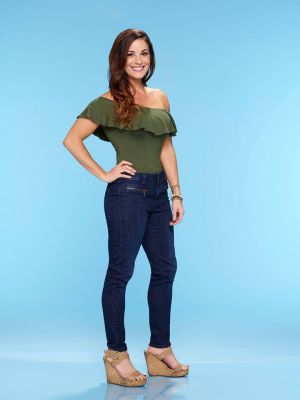 Andrée: The Museum of Broken Relationships, what an awesome group date. The Art of the Breakup, I mean what in the living hell kind of date is this? So first we had weddings, now we have breakups. I am guessing this is the B group. Do you detect any sarcasm in that? [Editor’s note: Yes.] Liz is being overly dramatic. She has to be a plant. Jade and Tanner’s wedding was televised so the producers probably picked her and came up with the storyline. It is just all too staged and Nick seems just so pissed off by it all. Good on Nick though for calling it what it is and squashing it right away. The look on Liz’s face when Nick dumped her was priceless. Like she sucked on a lemon. She’s probably [deleted expletive] the producer to ensure she gets on Bachelor in Paradise. Get it, girl.

The outtake today was one of my favorites. Whoever that chick is celebrating the anniversary of her boob job with cupcakes — yes! We will be seeing that drunk chick on Paradise no question. I really enjoyed this episode. Super scandalous. Lots of sluttiness and nudity. Pretty much my dream episode. If only every week could be this good!

The Bachelor airs Mondays at 8/7c on Monday.

If he just wants to go for a pair of boobs in his face he didn't have to go on...