The Bachelorette: Season 12–“The Men Tell All”

We are almost at the Bachelorette finale in which JoJo must decide between Jordan and Robby. But first, the Men Tell All. Bachelorette analyst Andrée H. tells you what’s what. — Elaine F.

I feel like anything I say here will be repeating myself since I thought yesterday’s episode was going to be The Men Tell All so CHAD!

Andrée: Please be Chad in the black car.

Elaine: You know it is. Our man gets a dramatic entrance.

Andrée: YES! That whistle is music to my ears.

Elaine: Yeah, baby. We love it when you do that sinister whistle of crazy.

Andrée: He gets his own trailer I love it.

Elaine: I’m going to be honest with you, I intend to fast-forward past every man who is no named Chad. Chris Harrison can shut up now calling our Chad a villain, he’s just misunderstood. He needs love.

Andrée: I do not love to hate Chad, I love to love Chad.

Elaine: Any woman who does not love Chad should take a look in the mirror and question her life.

Andrée: Oh man, the previews for Bachelor in Paradise look amazing. I am so excited for the summer of Chad.

Elaine: Me too. His role now is the violent drunk, but that’s okay. We know what he’s really like.

Andrée: Wait Ashley I. wants to go from virgin to mother on air? I’m okay with that.

Elaine: Ugh, Ashley and the crying. I’ve had enough of her but I know you like her.

Elaine: Yassss. My girl. They better treat her right. She’s been through too much tragedy, what with losing her family and all. Plus she’s a vet.

Andrée: All the men I don’t remember in the slightest.

Elaine: Yep, that is Anonymity Row.

Andrée: BRING OUT THE CHAD!

Andrée: No one in the world wants to hear Evan’s thoughts. 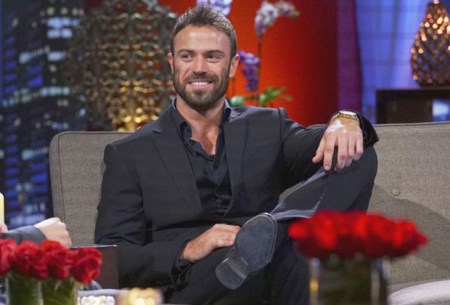 We’re not mad at Chad

Elaine: Word. Evan is a punk. Chad has the most manly strut.

Andrée: Watching the Chad recaps is the most fun I’ve had this season.

Elaine: Chad should have his own one-hour special.

Andrée: I don’t remember Derrick. Apparently he was a villain.

Elaine: If his name is not Chad, I’m not interested.

Andrée: I hate all these men, Evan the most for deciding he knows Chad’s on steroids.

Elaine: Please, all Evan knows is erectile dysfunction. No shade, that’s his job.

Elaine: Look at the audience turning against Chad. Lemmings.

Andrée: I forgot about his mom dying. That probably added to Chad’s rage.

Elaine: Aw, I forgot about that. He should get with Desiree. They can talk about tragedy.: she lost her whole family. And then they can have smoochies.

Andrée: I love that Chad dug into the other men’s past relationships to air out their dirty laundry.

Elaine: I love Chad insinuating that he knows their girlfirends in the Biblical sense.

Andrée: HaHaHa! “I don’t want to fight you in dress shoes.”

Elaine: Chad will not mess up his outfit. He can beat that guy’s ass later.

Andrée: A guy moved bedrooms to get away from Chad. That’s amazing.

Elaine: Yeah, because he wouldn’t be able to resist the raw sexuality that Chad exudes.

Andrée: “Your pocket square doesn’t match your shirt!” I just spit champagne all over my keyboard.

Andrée: “I made jokes about you to the camera because it was funny.” I love Chad’s whiny impression he uses every time he impersonates another guy.

Elaine: These bitter ladies should shut it down. They can’t take on Chad. So Chad thinks JoJo had to ditch him because he was the designated viallin.

Andrée:  OMG, that’s the same thing we said., JoJo wanted him but couldn’t keep him around due to public opinion.

Andrée: Chad is bang on right about Jordan. Also, love that Chad talked to Jordan’s ex too. What a stud.

Andrée: Chad tells it like it is. Chad would make an EXCELLENT contributor to our blog. You need to secure that.

Elaine: Dreamy sigh. The three of would have to talk business over protein shakes. So now crybaby Evan or “Yvonne” as Chad calls him is pouting because Chad ripped his shirt. Oooh, there is evidence.

Elaine: I’m not sure who started it, but I don’t care. You know Evan wanted Chad to rip his clothes off. Stop lying, Eva I stand by Chad. Wait, what’s happening? The audience is on Chad’s side.

Elaine: It’s hilarious how obsessed the other men are with Chad. They are worse than us.

Andrée: If I was any of these guy’s ex girlfriends I would be going after Chad too.

Andrée: I feel bad for you Evan, because you are a giant pussy of a man.

Andrée: America has not had enough of Chad, random nameless dude.

Elaine: I don’t know why those other men are there. Their only purpose in life is talking trash about Chad.

Andrée: I hope that Chad stays true to himself on BIP. Don’t change a thing.

Elaine: I think he is firmly established as the villain. I don’t care. My love is true.

Andrée: I know you don’t trust Luke and believe him to be a serial killer.

Andrée: I certainly don’t care to see his recap footage. Time for a drink refill!

Elaine: I’ll let you know if anything happens.

Andrée: I’m back. They are replaying when JoJo broke up with Luke. So much bad acting. On both parts.

Elaine: You missed the part where he said: “It puts the lotion in the basket or else it gets the hose again.”

Andrée: I’m kind of upset things started tonight with Chad. I feel like it can only go downhill from here. I’m seriously considering pausing this and going on a Pokémon hunt in my neighborhood instead. Maybe I could also hunt down a latte.

Elaine: You know, I downloaded the app but I don’t know how to use it. Tell me if you  Pokémon Chad.

Andrée: I’m going to try to stick it out, even though we are only halfway through.

Elaine: Luke has a sad story. I feel sorry for him, yet, I’m just going to fast-forward to Chad. I don’t mind Chase. I think JoJo ditching him in the fantasy suite after he said he loves her sets the stage for next season. “Chase: Trying to Find Love Again.” I’m not crazy about him, but we don’t have too many acceptable options in this group.

Andrée: I was fading fast till they reminded me of him asking if the van was his fantasy suite, HAHAHAHHA.

Andrée: I cannot wait to hear what Chad has to say to JoJo.

Elaine: I cannot wait to hear what Chad says when he ask him to blog for us.

Andrée: Blah, blah, blah I am getting so bored.

Elaine: We are spending too much time on Luke.

Andrée: I cannot believe one of the unmemorables feels the needs to harass JoJo with Whys.

Elaine: I’m sure she is. I have no idea who he is and I just can’t handle the Chad-less scenes. Hmm, the upcoming episode looks good.

Andrée: Don’t watch the previews! Don’t do it!

Elaine: Damnit, I forgot and got sucked in.

My prediction is that next week will be the most predictable ending in Bachelor history. JoJo will pick Robbie, Jordan will be The Bachelor. Let’s just skip it and get straight to Chad in Bachelor in Paradise.

This is the part where JoJo pretends that she isn’t 100% planning on doing the fantasy suite.