Tonight’s a big night for JoJo. Our Bachelorette expert Andrée H. philosophizes. Please don’t tell her that there will be no Chad tonight. She doesn’t know. Take it away! — Elaine F.

I can say for the first time this season I am stoked for tonight’s show! Bring on the Chad! Normally, I’d be excited to find out who is going to be on Bachelor In Paradise, but let’s face it, I already know! I’m ready for Chad!

Andrée: All that suspense and JoJo just voted out the guy she said she would. And after he made her a heart made out of flowers.

Elaine: It’s too bad, I know how much you looked forward to Luke being a serial killer.

Andrée: Guess she’ll get to keep her skin tonight.

Elaine: Ah, the patented Fletcher fake cry. I’m not a fan of the long goodbye. Vote him off the island and be done with it. Ah, Luke is sobbing because he didn’t tell her he loves her in time.

Andrée: Give me a break. Perhaps you should have told her earlier than two seconds before she kicks someone off. I never liked him anyways. See ya. You suck at acting, JoJo. Go ahead and keep on burying that face to hide your fake tears.

Andrée: First date! Thailand! Street market! Pretty sweet. With the guy I think she’ll marry, but I can’t remember his name for the life of me, still.

Elaine: OMG, I was thinking the same thing.  He’s not Jordan, so he is either Robby or Chase. I have no investment in this season. I only cared about Chad. So whoever this guy is, he says he can’t think of a more romantic place to propose Thailand. I submit Paris, a skyscraper overlooking Manhattan (which is how Mr. TVRD, proposed.), at sunset on a canal in Venice, lounging on the pink sands of Bermuda, on a snowy day in the Alps… What? I drifted off. Oh, and his name is Robby.

Andrée: I hate it when she says she feel safer. Safety isn’t what I aspire to. Maybe it should be I don’t know. 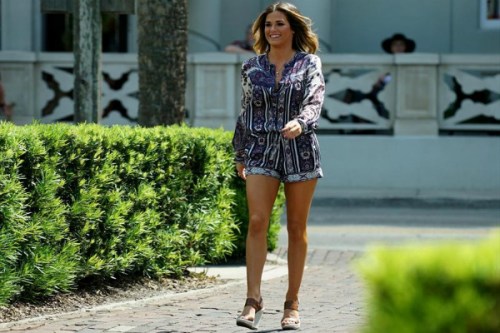 JoJo goes to Thailand for a fantasy.

Elaine: “Safe” is a vague, unsexy word. Is she safe because she’s thinks of him as a brother? Does she mean “protected” like the way a woman would feel with Chad because he would wrestle a bear just for looking at you?

Andrée: This is the part where JoJo pretends that she isn’t 100% planning on doing the fantasy suite.

Elaine: All of these contestants look the same to me, how can she tell which guy she’s with?

Elaine: Yep, they should have gone to the Hampton Inn. They have a DIY waffle machine in the lobby.

Andrée: I think JoJo would love anyone who loves her and that makes me a little sad.

Andrée: Wait, why are we recapping dates? Where the hell is Chad?

Elaine: Uh, I didn’t want to say anything but The Men Tell All airs tomorrow night.

Andrée: This is some serious bs, I thought tonight was Men Tell All!

Elaine: I expect that to be awesome.

Andrée: Time for the Jordan date. I’m totally into our next Bachelor. I think he’ll have a great season.

Elaine: I don’t want to get my hopes up. I’ve been finding him iffy lately.

Andrée: Yes Jordan, get sweaty. JoJo, get out of the way, you are blocking my view. It’s hard watching her being so painfully aware that he isn’t into her.

Elaine: Sigh, JoJo is just so JoJo. “Tell me that you love me. But Ben told me that, and he didn’t really love me. Do you love me love me?” She is tiring.

Andrée: He’s ready to commit to a future but not with you JoJo. What does the next year look like for you?” “Crickets.”  She is just coming across as so desperate and annoying to me right now. He looks totally annoyed by her too. He looks like he wants to slap her.

Elaine: “Oooh, here is a card? I wonder what it could be!” Sigh.

Andrée: Why pretend to be surprised to see the fantasy suite card? So over the predictability.

Elaine: I predicted you would say that.

Andrée: Pause, rewind, pause. We have a hot shirtless Jordan first thing in the morning!

Elaine: What happened? Well, I guess I know the answer to that question.

Andrée: We all know you are not falling in love with three men JoJo, you aren’t even the least bit convincing.

Elaine: As I’ve said before. Worst. Actress. Ever.

Andrée: I don’t remember who Chase is.

Elaine: He’s some guy who is not Chad.

Elaine: Ah, a visit to the fish market. So sexy.

Andrée: Yuck with the fish. Terrible date. This guy is painfully forgettable.

Andrée: What happens when you put two dimwits on a date? I fall asleep.

Elaine: Did you say something? I was napping. Wait, what’s happening? Why is that man who isn’t the other guy in her room?

Andrée: Ok so dude number one showed back up in the middle of her date. That’s awkward. So she kisses him, That makes it more awkward.

Elaine: Not cool, Robby. This is not a phrase that I usually use, but “dick move.”

Andrée: It confirms to me that he’s a creeper. Ah, crap back to this other dude. When do we get Chad?

Elaine: I already told you that. You have to wait until tomorrow. So Chase tells her he loves her, and JoJo does not look enthused at all.

Andrée: I wonder if her feelings wouldn’t have been so suddenly dampened if another dude hadn’t interrupted her date. I could go for her dumping a dude in the fantasy suite. That’s a bit of excitement.

Elaine: OMG, that would be terrific. Just snatch that card back and push him out the door.

Elaine: Holy moly! Are you psychic? This is brutal; Chase is really calling JoJo out on her bs. Here she goes with the sobbing. It’s like she wants to stab a man in the heart and then get a hug. Despite not knowing who he is, I am now Team Chase. He’s good looking and may have potential to be the next Bachelor.

Andrée: Why is it that she breaks up with dudes then won’t let them leave?  She’s always searching for validation from guys she crushes. It’s the worst.  I love that he called her on basically pulling the same shit that Ben did. Why is she still talking?

Elaine: Ugh, JoJo is the worst. You’ll be better off without her, Chase!

Andrée: He’s raring to get out of there.

Elaine: Of course, he says “I love you” and she gives him the boot without any farewell sexy time.

Andrée: Allow him his pride. Let the man walk away.

Elaine: Uh-oh, he did not leave well enough alone. This is uncomfortable.

Andrée: Chase shows up to the rose ceremony anyways, I guess he wants to get rejected again. He shouldn’t have come back. Made him look like such a pussy, he could have said all that at Men Tell All. He probably wanted to stay an extra day in Thailand and party on Bachelor’s tab.

Elaine: Sorry, guy. I’m not on Team Chase anymore. That’s weak. Chad wouldn’t have been so undignified.  I changed my mind. This might be a good way to get considered for the next Bachelor. Chase is attractive and straight, I think. This did not strike me as a house full of lady-loving lads.

This is some serious bs. I thought tonight was Men Tell All. On the plus side, we got the overnights done with! We only have to get through her family now, although the brothers’ portion of that should be awesome. I guess that will be next week. Time to sleep, I have to wake up, get through my day and then CHAD!

Okay this must be the smallest town in the world if there are still pictures of him up in the...