Once again, our Bachelorette aficionado and glutton for punishment, Andrée H. gave up two hours of her life to share her insights on television’s most culturally relevant show.

After not having The Bachelorette last week due to Independence Day, I almost forgot it was still on. However, I eventually remembered that the JoJo Story has not yet concluded. I am sitting here trying to remember who I am rooting for, and who I don’t like, but I can’t remember any of them. Oh well, time to take a big gulp of wine and get to it.

Andrée: Are hometowns really just around the corner? I feel like by now I usually know who is on the roster.

Elaine: Call me crazy, but I’m unusually optimistic about tonight. There aren’t that many men left so hopefully there will be tears, drama and fighting.

Andrée: All the guys take a bus, one gets to ride with JoJo. Here’s guessing it’s a loser she doesn’t want to be with.  Alex for the win. Yup, I was right. JoJo looks bored to death in that car.

Elaine: Your prescience about these matters is eerie. There are two things upsetting me right now. JoJo and James are shoveling Pringles into their mouths. The product placement message is: When you are on a dull date, enjoy this salty treatt, so you don’t have to talk. The other issue is that these white boys are entertaining themselves by beatboxing. I’m embarrassed for them.

Andrée: As if the guys are that jealous, Alex’s entire date consists of sitting in a car.

Elaine:  Oh, dear God, now he’s rapping to her. Please make it stop. Aren’t they going to do something on this date?

Andrée: Oh look they get an actual activity! Oh, they get to farm… I always laugh when the loser guys think “If I can only get some one-on-one time, she’ll fall for me.” Every time they get sent home after the date, if not during.

Elaine: Damnit, that product placement made me hungry. I’m gonna go search the cupboards for something salty.

Andrée: I wish I had popcorn. I wish I was at the movie theatre. No JoJo, Alex doesn’t look good in his gaucho outfit, he looks like an idiot.  JoJo looks like she wants to throw herself down in front of the horse for a swift trampling to death. 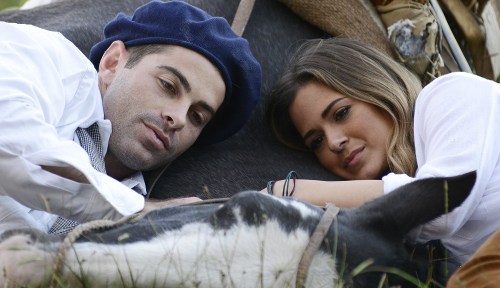 Alex and JoJo horse around

Elaine: I’m back. Fortunately, I found some Utz potato chips. Sorry, Pringles but Utz is the best. That said, I’ll like any chip company that pays me for a mention, so the ball is in your court, potato chip brands.

Andrée: I’m sorry, but this horseshit feels like I need to turn it off, so I don’t get busted for animal pornography.  This date is spooning with a horse. I just, I don’t even have words anymore.

Elaine: First off, I enjoy your use of the phrase “horse shit.” Oh, you are right, this is terribly upsetting. Can we go back to the white boys rapping now?

Andrée: Alex is all about this horse. He’s feeling love for the first time.

Elaine: I’ll admit that my relationship with my dog is unusually close, but it doesn’t warrant a visit from the ASPCA like this horse scene.

Andrée: “I have never felt so willing to fall in love with someone.” You know the sound bite  team was like “mehhhh, good enough.” Oh God, Alex’s date continues. Just tell him you love him like a brother and call it a day.

Andrée: Alex, no buddy, you didn’t connect with JoJo, you connected with a horse. They are setting him up to look like a fool, and he is playing into their hands perfectly.  Uh-oh, he dropped the love bomb. Earlier JoJo was thinking about friend-zoning him. I think she’s going to boot him right now.

Elaine: And he will feel like a horse’s ass. See what I did there? That was an unconvincing line delivery of “I think I’m falling in love with you.”

Andrée: Ouch. “When you tell me you are falling in love with me, I don’t feel as excited as I should feel.” Friiiiend Zone. Bam.

Andrée: His face right now, though.  Yup, it does suck. Move on. See ya! My prediction was bang on. Once again. This show is so damn predictable.

Elaine: That’s why you are the Bachelorette expert.

Andrée: I wish I could take credit for it, but this show is unimaginative and predictable as all get out. He’s so pissed. HAHAHAHAHA

Elaine:  Oh, yeah. He’s thinking about how he had to waste hours in a romance with a horse.

Andrée:  JoJo is trying so hard to pretend to care. JoJo stop chasing him down trying to get validation from him that you made the right move, maybe be more sensitive to his feelings. You are going to be a terrible wifey. Stop fake crying you are terrible at that too. Terrible at life, really. Maybe you should have broken up with him in the unicorn head.

Andrée:  Lord can you imagine going through all this and your prize is JoJo? Gag. The guy that just said in his eyes he is a front runner, I have no idea who that guy is.

Elaine: Me either. Let’s ignore him.

Andrée: Here we go Jordan. All you have to do is pretend you like her for a couple more dates then it is Bachelor city for you.

Elaine: Agreed. Jordan is totally in the running for next Bachelor. I hope JoJo doesn’t screw him over by picking him. The producers probably would intervene.

Andrée: A wine tasting!! With a private jet!! Yes and Yes!  I could totally get down with this date. It’s just all so awesome.

Andrée: Oh they have to work, boo!

Elaine:  Look, Jordan should be happy he’s stomping grapes and not trying to roofie a horse.

Andrée: Blah, blah, guys at the house whining. I just realized we’re only half an hour in. Kill me.

Elaine:  Who are these men? Why do they all have the same hair?

Andrée: Back to the date, here we go, another love bomb. It’s about to happen.

Elaine:  I just don’t see it. This is why I didn’t want JoJo as Bachelorette. She’s so bland. This date isn’t exactly what I’d call sexually-charged.

Andrée: She’s so smitten, can’t wait till Jordan breaks her heart. How could anything be sexually charged with JoJo? I mean they had to resort to animal pornography to try to get some spice in there. What does that tell you?

Elaine: As long as he does it in such a way that it doesn’t screw up his chance to be the Bachelor. Jordan is going into a lot of detail about his history. It seems overboard, but it’ll make good fodder when he’s the Bachelor. Here’s the love bomb–you called it. Gotta say, he has excellent kissing technique. I love it when they hold your head in both hands.

Andrée: He can hold me like that anytime, or hell, throw me up against the wall. My entire season of The Bachelorette would be blurred out. I’d make Kaitlyn look like a saint. Time for a group date I guess. Woo-hoo.

Elaine: Their date got rained out and they are staying in. Sitting around eating and drinking in a hotel suite sounds preferable to whatever she had planned. And there may be board games, sounds good to me. James, the dud, is trying to impress her by shoving as many fries in his mouth as possible. How to put this delicately? He’s the designated “average Joe” among the hunks–this is not making him more attractive.

Elaine:  Forget what I said about this sounding like a fun date. She’s stuck inside with a bunch of drunken look-alike frat boys. One-on-one time with Robby and he spends all of his time talking about his bad breakup with his last girlfriend

Andrée: This might be the new worst date in Bachelorette history. One would think there is a fairly long application process to get on this show, so did he sign up the day they broke up?

Elaine: Yep, that is shady and Robby will get together with his ex as soon as he gets the boot from this show. Wait, he got the group date rose so Robby will be single for at least another week.

Andrée: It’s the last one-on-one before the hometown dates with some guy named Luke. They are shooting things. I remember him. He’s the serial killer. Don’t go on a hometown date with him!

Elaine:  Come on, a hometown date with a serial killer would be “the most dramatic episode of the Bachelorette ever!” You may think he’s the serial killer, but I say James is the one to snap. JoJo is the first girl whoever talked to him. Probably.

Andrée: Honestly, if anyone of them went on a killing spree I’d perk right up. They should do an episode in Oz. JoJo should go on a date with Simon Adebisi. I would actually pay money to see that date. On a positive note, JoJo’s hair is looking so good on this date.

Elaine: I think she likes the serial killer. There is a lot of hugging going on. When she meets his “family”, it’s going to be the taxidermied bodies of all his other girlfriends. Probably.

Andrée: I guess I should be voting for the serial killer then, that would easily be the most interesting thing to happen all season! Thank God there’s no cocktail party. She’s going straight to the rose ceremony. First rose goes to the serial killer, good job JoJo.

Elaine: Yay! We’ll get to see his taxidermy “family.”

Andrée: Jordan gets a rose of course.

Andrée: And the final rose goes to…Chase. Imagine that, stuffing as many french fries as possible into your mouth doesn’t get you the girl. Of course,  James is going to blame it on just not getting enough time to tell her he loves her.

Elaine: She better watch her back. Probably. It’ll be fine, Luke will kill anyone who tries to harm her. So the final four are Jordan, serial killer, Robby and Chase. I know you told me not to watch the previews, but they look good. Thoughts?

Andrée: I closed my eyes and went la, la, la for the previews. As you should have, now you are going to have unrealistic expectations for next week’s episode and surely be disappointed. That’s on you Elaine, that’s on you.

This episode was freaking painful. I’m pretty much ready for this season to end and for Bachelor in Paradise to get started. Actually even thinking about Bachelor in Paradise is more exciting than watching this episode. JoJo should wear dark lipstick more often, these are my thoughts! I’m off to do something far more adventurous, watching some paint dry! See you next week!

He spent so much time building up the anticipation for the first kiss and then she decided it wasn’t good...