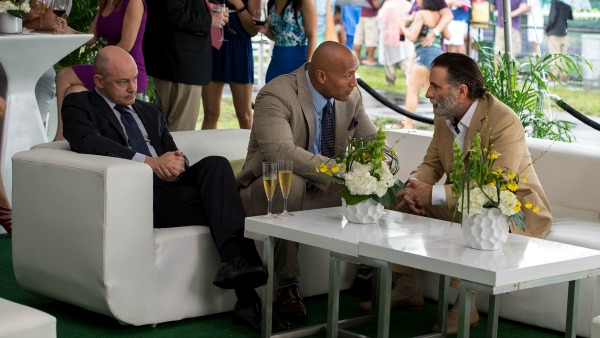 Spencer begins to implement his plans for revenge against his nemesis Andre Allen. However it seems he has another big issue to deal with, pain management and the possible drug addiction that it’s causing. Tracy, Ricky and Charles are also encountering some bumps along life’s little yellow brick road. Let’s get on with the recap, shall we?

This week’s episode starts with Spencer inspecting the memento he got from his tussle with Sizzle during their appearance on Jay Glazer’s TV show, a huge ugly multicolored bruise on his left hip. It appears to be serious enough to cause him to limp into the pharmacy to get his prescription for Vicodin refilled. The pharmacist throws a monkey in the wrench by saying that the script can’t be refilled without a doctor’s orders. The doctor tells Spencer that she has a real concern about the amount of the painkiller that he’s consuming. After some back and forth, that appeared to contain a little pleading on Spencer’s part, she agrees to write him a single script for 20 pills with the provision that he come in and get a full exam within ten days time. Spencer, of course, agrees. Anything to get that fix.

Sizzle is waiting in the conference room at the office when Spencer walks in. This seems to have slightly pissed off Virginia, Spencer’s assistant, who says that Sizzle just strolled in unannounced and made himself at home. Spencer tells her that he invited Sizz and then he and Joe go into meet with Sizzle. While serving up a burger boxed lunch they discuss Sizzle’s current financial situation. Sizzle says he’s looked into things with Andre and has come away with just one burning question. “Where the fuck is my money at?” He says that Andre has no answers for him about this situation and he’s getting rather pissed about it. Spencer jumps in at that point to seize the opportunity. He tells Sizzle that it’s time for a change. Sizzle agrees but says that when subjects like this come up between him and Andre, Andre always manages to talk him out of doing anything. During this entire conversation Joe just sits back looks more and more uncomfortable about the way things are going. Noticing his partner’s ‘distress’ Spencer calls Joe out into the hall to find out what’s up. Joe expresses his uneasiness with the situation and says that they should consult Anderson before going up against a major player like Andre. Joe also reminds Spencer that their organization hasn’t been officially cleared by the league yet. Spencer’s not having any of this. He reminds Joe that the old man is still looking for them to bring in more big clients. Once back in the room, Spencer tells Sizz that they will work with him. Joe has Sizzle call Andre to tell him about the change. Once Andre answers, Sizzle punks out and then agrees to meet Andre the next day at a tennis tournament. He then gets Spencer and Joe to agree to meet with Andre at the tournament and tell him the news. “It’s not my fight anymore,” Sizzle tells them. “Got my managers to handle it.” Balls of steel on that guy.

During a lunch meeting with her boss Tracy attempts to discuss the issue of equal pay. She tries to bring up, as an example, a new employee who’s getting paid 20 grand more than she is for basically doing the same job. Her boss just blows her off by saying it’s not a big deal. He also asks about the story with Ricky Jarret’s contract situation all the while calling her ‘Legs’ and dropping in the occasional sexual innuendo. Tracy’s had enough. She quits and walks away.

Reggie drops by to seek some financial advice from Joe. He want’s to ask Vernon to start paying him a salary and he wants to know how much Joe thinks he should ask. Nothing. That’s what Joe tells him, and he ain’t far from right considering Reggie’s already soaking Vernon like a sponge for almost all his living expenses. After a bit of role playing, in which Reggie tries to explain what he does for Reggie, Joe gives in and comes up with a number — $1,500 a week. Reggie seems OK with it. Afterwards Joe calls Vernon and gives him the heads up on Reggie’s plan. Ultimately Vernon agrees to the $1,500 a week figure. DAYUUMM! Wish I could collect that kinda cake for just sitting’ on my ass and beatin’ some poor bastard on the Playstation.

Reggie brings up the salary issue during a paintball match. After saying he’s given it some thought Vernon says he’s agreeable to the idea. They differ on the amount just a little bit though. Reg wants three grand a week while Vernon’s figure is eight hundred. Seems there’s a bit of a disagreement. Hmm, what to do? During a mother grueling paintball round, which Reggie hates, by the way, Reggie sees a chance to take a shot at Vernon. Mumbling about the $800 he lights Vernon up. Vernon falls off a platform and is screaming in pain about his leg when Reg finally gets over to him. If this proves to be a serious injury Reggie might actually have to go out and work for a living. Wouldn’t that just SUCK!

Ricky, Jason and TTD get together to discuss which team Jason should try to negotiate a deal with. After looking at San Diego, Denver, New England and Buffalo Ricky, decides to go with New Orleans. Jason says he will get right on it. TTD seems just a bit disappointed though, being a highly experienced cannabis connoisseur, he was hoping for Denver because weed is legal in Colorado. Ah, the bitter sting of life’s disappointments.

Charles is meeting with the Dolphins’ coach about his situation with the team. The coach assures Charles that he has a secure place on the team that his work is much appreciated he’s well respected. There’s gonna be just a small change though, the coach is gonna switch Charles’ position to right tackle. Charles is not happy with the switch and voices his opinion. The coach gives him no alternative. “You either go on the right side, or you go back home and it’s Sports Center with your dick in your left hand and a big ole jug of Kaopectate in your right.” Never a more eloquently put ultimatum have I heard in quite a long time. Charles has no choice.

Joe and Spencer attend the tournament to talk to Andre and Joe is still not convinced that they’re going about this the right way. He seriously fears the kind of power that Andre wields. He again tells Spencer that they should talk to Anderson before making this kind of move. Spencer stops him and asks for a favor. He wants Joe to bust him one in the jaw to get Spencer in the competitive state of mind. Joe does this without hesitation and Spencer then also tells him about the bad financial deal he had with Andre. Joe finally begins to understand. Andre strongly warns Spencer to stay away from Sizzle. Spencer explains that it looks like Andre doesn’t understand his client the way he should. Spencer say that he and Joe do understand them and can do a much better job for them. “On behalf of Siz and all the other players,” Spencer tells Andre as he leans on close. “You’re fucking fired!”

Spencer and his crew have returned to HBO for season two of Ballers. Right away things get off to a...