Bachelor analyst Andrée H. is back to share some insight about the realistic depiction of love on the documentary-style show. Take it away, Andrée — Elaine F

After nearly both falling into a coma last week, we made a pact to only cover the interesting bits of this week’s episode…so the recap is over! Ha-ha just kidding but probably not far off. I have been drinking all day in preparation to watch this episode, now that my Chad is gone there is really nothing sucking me in, but 3-4 glasses of wine in and I am actually starting to be a little curious as to what new drama will go down this week! Let’s tune in…

Andrée: Quick everyone plug your ears, ignore the previews! We will not be fooled!

Elaine: I’ve learned from you not to watch. Too many fake-outs.

Andrée: Hearing her try to pronounce Buenos Aires is painful.

Elaine:  Only JoJo can take the romance out of a romantic language.

Elaine: Heh. It’s the flatness of her delivery that I focus on. Her “excitement” seems forced. Bad actress.

Andrée: Oooh another two-on-one  date! Excellent. Let’s get rid of some more losers! So random that just the one dude hasn’t kissed her yet. Even more random that he is talking to all the other guys about it.

Elaine: I suspect Wells would rather kiss a boy but he also looks very young. In either case, he has never kissed a girl. 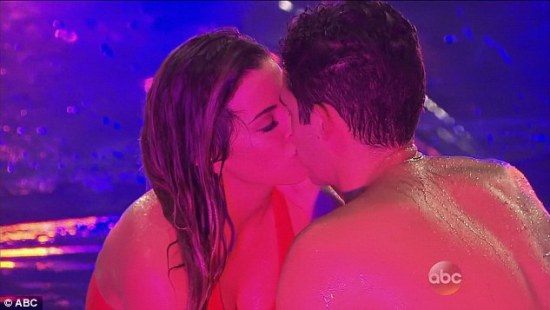 Andrée: This guy is so awkward. Who cares when you kiss her? Seriously. Oohhh now they get to go in a pool. I don’t get how lying on your belly in an inch of water is “the right moment” but whatever, glad we can move on from this.

Elaine: So, my dog did something cute and I got distracted. So, let me get this straight? They did some sort of aquatic performance art date? I don’t really know what’s going on here, it must be an Argentinian thing, but at least he finally sealed the deal. Something tells me this dude is always in the friend zone.  That is amusing since JoJo was in the friend zone when she was on The Bachelor.

Andrée: I love that he spent so much time building up the anticipation for the first kiss and then she decided it wasn’t good enough and dumped him. That’s priceless. He’s like “Aw damn, not again.”

Elaine: Sorry, Wells. There’s the right girl –or boy– waiting for your love. Word to the wise, just kiss them and get it over with.

Andrée: I’m not falling for your sob story, JoJo. You are worried nothing will work out because one dude is in the friend zone. Please, you have a dozen other waiting on you.

Andrée: Uh-oh, it’s group out time. This is typically where I start to fade fast. I  like the music in this episode. Makes me want to dance around the room in a very large skirt.

Andrée: I have to say that I always stand out in a crowd –no matter the size. I would kill group dates– if I could stay awake.

Elaine: The other girls would get jealous and then run tell The Bachelor that you are not there “for the right reasons.”

Andrée: We all get it James, you aren’t sexy. Did you need us to say it? There.

Elaine: Poor James. I don’t want to say anything unkind so I won’t say anything. Okay, I will say something unkind, he’s a dud. James is using his his one-on-one time to whine that Jordan can’t be trusted because he’s attractive, well-off and successful. Interesting maneuver for a pity kiss. Welp, now we have out next “rivalry.” Jordan vs. James is ludicrous. No competition. Time for the date rose. And it goes to Luke.

Andrée: These two dudes going on the two-on-one. I actually have no idea who either of them are. So I hope she dumps them both.

Elaine: Never seen them before. I will refer to all the other men as Not Chad or Not Jordan. Okay, one of them is Chase and the other one is Not Chase. Oh, his name is Derek. So we can still refer to him as Not Chad, Not Jordan, Not Chase. Oh, never mind. All I hear is: “Blah, blah, something, something, express feelings, something, I came here for a reason. Blah, Something.” Date rose time. Goodbye, Man I Never Saw Before. Congratulations Whoever You Are.” Where’s Jordan? I know his name. Lord Jesus, the date entertainer is singing “Don’t Cry for Me Argentina” as Man I Never Saw Before performs his limo cry in Argentina. Wow, he is really sobbing. I bet the producer just lied to him that his grandma died to get all that emotion.

Andrée: James bitched this whole time about not having a chance to get to know her and as soon as he gets some one-on-one time he uses it to bitch about Jordan. It’s probably the only reason the producers even gave him any one-on-one time with her. I love that red dress on JoJo. Hey look at me, I said something positive.

Elaine: Red is JoJo’s color. See? I can be nice too.

Andrée: Oh, the dramatics. She can’t decide between two forgettables. Send them both home! Do it! The show tricked us. They both get roses. Boo-urns. They both should have gone.

I can’t believe it’s down to six guys. I feel like by now I usually know who these guys are. There are no real sparks of romance even. Hopefully, things will get juicy soon. Regardless I’ll still be watching, why, I don’t know! See you guys next week!

The Bachelorette airs Mondays at 8/7c on ABC

Bachelorette expert and Canadian import, Andrée H. is ready to send some of these contestants home--maybe in the back of...