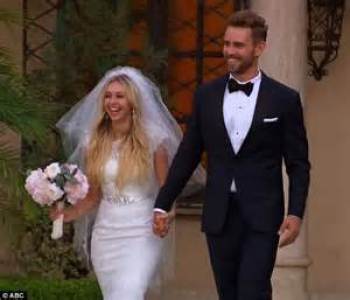 What could have been. Fare thee well, Corinne.

Here we go, the hometown date elimination. Which girl’s family sucks the most? Before we get to all that, ex-Bachelorette Andi Dorfman, shows up to advise her punching bag, Nick Vialls. We have The Bachelor statistician and Canadian minister of awesome Andrée H. to break it all down. — Elaine F

Andrée: I want to throw up just looking at Andi Dorman’s stupid face. I hate her so much. Her little snide comment about four girls actually sticking around. Get off my TV,  Andi. You already ruined two other seasons for me. This is the worst possible way to start an episode. Nick shouldn’t be talking about his regrets when she wrote a book talking about how he was terrible in the sack. So that was just completely pointless? There was no point to that whatsoever?

Elaine: When it comes to rolling my eyes at Andi Dorfman, I’m an OG original. Why is Andi asking about Nick’s plans for fantasy suite? I was hoping she was going to say: “Try not to suck at it.”

Andrée: She practically did. I am so glad that bit is over. I now have the heebie-jeebies.

Elaine: Which girl will get eliminated? They previewed my girl Rachel in Finland at the beginning of the season. Just now, they showed a preview of Raven in Finland. Spoiler much, ABC? Sheesh.

Andrée: In my mind, Vanessa is going, she had the crappiest hometown date easily. These bitches are freezing. They should set up a wind guard or something. God, Corinne’s coat is fabulous. I need one. I notice during the entire ceremony Corinne has a tear down her face. I wonder what was said that we didn’t hear. I’m shocked Nick didn’t pick Corinne, it seems like she is the only one he has any chemistry with whatsoever. She would have stayed with him forever too, if only for the publicity. I know I should be happy because this means that she is going to stay in the Bachelor franchise forever, but I honestly think they would have been good together. Well, I big-time hate this episode.

Elaine:  Corinne: “My heart is breaking. How will I go on? Driver, take me to Bachelor in Paradise. Imma take a nap.”

Andrée: If I didn’t have to write this blog I would turn off the television.

Elaine:  Thank you for your service. Oh, boy, ANOTHER contestant who announces that she’s had a nonexistent or lousy sex life. There is always one. Nick’s going to do all the heavy lifting in that fantasy suite.

Andrée: I am in no way surprised Ravn’s had a nonexistent sex life. I’m not watching her date, it’s on the TV but I’m too focused on tweeting Corinne.

Elaine: Did Raven say she never had an orgasm because she “didn’t trust” her boyfriend “to get her there?” At the risk of being indelicate, since when did clits get so demanding? Oh, FFS now she’s talking about her dad praying for her.  Way to get in the mood with the dirty talk.

Andrée: Somebody buy this chick a Hitachi, stat!

Elaine: As with so many things you say, I’m afraid to ask what that means, so I’m moving on. This fantasy suite cabin is marvelous. I want Mr. TV Recaps to take me to that sex cabin. Unlike Raven’s ex, he’ll make sure I see those Northern Lights.

Andrée: Nothing I can say will top that!

Elaine: Yay, they just announced that next week is a three-hour episode! I have something to live for. Aside from Mr. TV Recaps. And the dog. And wine.

Andrée: Man they are going to stretch the next two dates into 3 hours? Or will it be 2 hours of dates and an hour of Women Tell All? They should ban the mental health counselor so she doesn’t ruin any of my precious Corinne time.

Elaine: Wait, this episode is only one hour? Dafuq? This is some bullshit.

Andrée: Thank god. F you The Bachelor this episode was the worst!
The Bachelor airs Mondays at 8/7c on ABC

Vanessa has a bit of a naughty streak, eh? Still not enough to save face. She’s a terrible representative of...