Here we go, the hometown date elimination. Which girl’s family sucks the most? We have The Bachelor statistician and Canadian minister of awesome Andrée H. to break it all down. — Elaine F

Andrée: I am not looking forward to the first part of tonight, obviously, but I am looking forward to seeing Corinne again during The Women Tell All. Three hours straight, this is going to require copious amounts of champagne to get through. I love how the previews are basically all about The Women Tell All. They might as well come right out and say press fast forward on the first hour and a half of this crap. 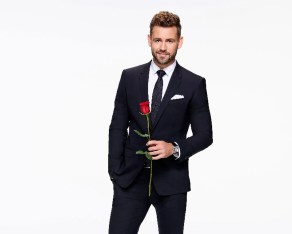 Elaine: That Finland fantasy suite rustic igloo love pod looks fun. Theory: Raven totally fibbed about never having an orgasm so that she could bolster Nick’s ego in the fantasy suite. Clever girl. That “Yay, I had great sex.” montage makes me hate this show and myself. I picture mean old Andi and Kaitlyn sitting around talking trash over wine. I’m glad we’re not like that.

Andrée: If I didn’t like Raven before, her after-sex montage definitely sealed the deal on my pure hatred for her. On that note, I’m popping my second bottle already. It’s going to be a long night.

Andrée: Trust me Rachel, nothing about cross country skiing is fun. Where is the booze on this date? Honestly, I can’t get into watching this date with Rachel knowing she ends up getting the boot. I don’t understand why they spilled the beans early on that one. Especially with Corinne gone, Rachel is by far the only good one left.

Andrée: Round Two of Nick getting it in. Ding, Ding. Coming up: a snoozy bitch fest with Vanessa. Be still my beating heart. Oh, this date is all about torturing Vanessa. Okay, that I can get into. Now they are in a outdoor hottub, much more pleasant; 9 out of 10 people would be engaged in a hot makeout session. Vanessa is going on about her Sunday traditions and how non-compliance is a deal-breaker for her.

Elaine: Vanessa is wasting time. Nick’s turned into quite the cutie. I like the rakish smile. No wonder he’s got seven Bachelor Nation notches on his bedpost, That’s the word on the street.

Andrée: Nick’s seeing what it feels like inside a Canadian, eh? Make that 8. 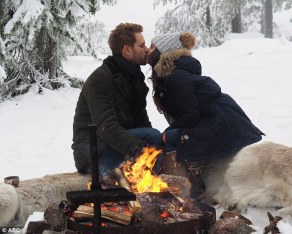 Will it be Vanessa? 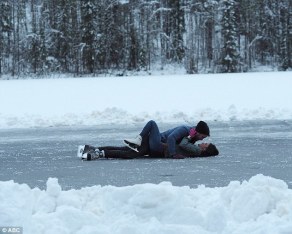 The Bachelor: Nick and Raven in Finland

Elaine:  Vanessa thinks he’s gonna move to Canada? I love that he told her he’s “proud to be an American.” Damn, right. He wants that poontang, not poutine. Okay, we know Rachel’s the next Bachelorette. This rose ceremony suspense isn’t killing me. She’s doing a pretty limo cry, working that Lauren Conrad mascara streak.

Andrée: Wow, I am so shocked that Rachel doesn’t end up marrying Nick. *rolls eyes* This whole episode was pointless and insufferable.

Elaine: He’s obviously going to pick the nag. Does he dump Vanessa before or after Dancing with the Stars? Does she get to keep the Neil Lane ring anyway? I don’t imagine we’ll ever see Vanessa again. “Core values” don’t get you to Bachelor in Paradise, do they? Predictions?

Andrée: Honestly, I think he is going to pick the hick. He doesn’t want to move to Canada, he wants to live in LA for endorsement deals. And he has no self-confidence so I think he’ll go for the one that definitely will never break up with him. And who wants to be nagged every night for the rest of their lives? *shudder*

The Bachelor’s season finale is tonight at 8/7c on ABC.

One thought on “The Bachelor Recap: Nick’s Season Ep. 10”

Get off my TV, Andi. You already ruined two other seasons for me. This is the worst possible way to...