Bates Motel Recap: “The Convergence of the Twain” 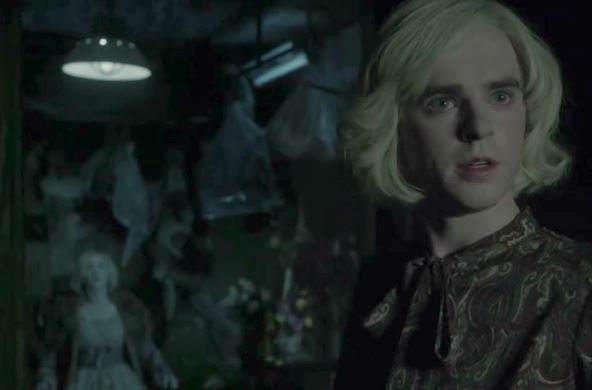 After the attempt on his life by Jim Blackwell, Norman decides to stop by the prison to taunt Alex and let him know that he never felt better. Alex assures Norman it’s just a matter of time before he gets what’s coming. I’d like to see that.

Dylan’s torn when Emma tells him about her conversation with Caleb, but ultimately, he’s relieved. How is he supposed to explain Uncle-Dad to little Kate? Caleb has left a note and is gone.

With nowhere to go, Caleb takes a bus to White Pine Bay. He bangs at the door of Norma’s house, calling her name. He gets inside through an unlocked back door. He’s confused by how dirty everything is. Norma was always so neat. Dirty, dusty dishes are piled up, egg shells and empty cartons litter the floor. He goes upstairs still looking, but no one’s there. He’s walks outside feeling ill-at-ease.

Alex starts a fight in the prison kitchen. He has a concussion and may need to be relocated. Closer to Norman perhaps? He has a score to settle. Norman doesn’t know how lucky he is that Alex is locked up. And now Caleb’s in White Pine Bay. I didn’t expect to see him so soon.

In town, Norman sips coffee in a cafe across from Madeline’s store, watching her. Norman hides behind a newspaper when she notices him and comes over to say hello. He tries to act surprised. Madeline sits down and tells Norman she’d like to set him up with a friend of hers. He’s not too interested until Madeline’s husband walks in. It’s Sam Loomis, alias “David Davidson”. Norman stares at Sam while Madeline prattles along about her friend and a double date. Hey, how ‘bout tonight? Why the hell not?

Norman arrives home to find Norma practicing her French on the hi-fi. He tells his mother he knows that Alex is trying to hurt him. A sly Norma says she can handle him.

Chick is at the door, stopping by to check on Norman. Norma can’t stand him and finds him annoying, so she makes herself scarce. He’s brought a box of apples, and a business proposition. Norman suggests they go into the basement, and an apple-chomping Chick follows right along.  He has a bird in a sack, and is interested in Norman’s taxidermy skills. Chick says he really needs money. He is unable to support himself since Caleb’s beating. Chick says he can supply the subjects, Norman can stuff ‘em and they can share profits. Norman agrees and they share an uneasy truce.

Caleb checks in at a local motel. He hears of Norma’s death from the desk clerk. He’s stunned and hurt. He can’t understand why Dylan didn’t say anything.

Sam Loomis stops by the Bates Motel to warn Norman to stay out of his business. Norman acts pious and tells Sam he isn’t showing much respect to his wife. Oh, if Sam only knew about you, Norman…

Caleb goes to find Norma’s headstone. His heart is broken and he falls to his knees, sobbing. There are no words for his grief. Tissue break… okay.

Back at the Bates house, Norma is suspicious about Norman’s double-date. Norma is worried because she won’t be there to help him. She’s sarcastic and sly, and today, she is bored. She’s decided to take up smoking.Why not? She’s dead. Norman is against the idea and hopes she won’t light up again, but he’s got a date to keep. The foursome have dinner in town. Norman has a lot of pointed questions for Sam. Sam’s out of town a lot, doing exactly what? He works in Seattle? So far from home? Sam says the hardware store is Melissa’s baby. Norman enjoys playing this cat and mouse game with Sam. Every question seems to poke a hole in Sam and Melissa’s marriage. Norman’s date learns of Norma’s suicide and gives Norman her condolences. Still sticking with that suicide story, eh, Norman? In the men’s room, Norma pops up in a sleek black outfit and hat and asks Norman a lot of questions about his date. Norma is so different now. Her outfits these days are less and less “motherly”. They are sexier. I suppose that’s how Norman sees her in his fractured mind – she’s more conspirator than mother. Norman isn’t glad to see her and insists she go out the bathroom window and wait for him in the car. Once he joins her in the car, she is livid. She can clearly see that Melissa resembles her, only younger. Norma decides she needs a drink, and Norman follows her into the pub. They chat with the bartender. What’s interesting is that it’s a three-way conversation with the bartender, Norma and Norman. They never miss a beat. Well done Freddie and Vera! The Bates are definitely morphing into some kind of psycho-sexual deviant.

In another pub, Caleb runs into Chick. Chick goes against all sensibility and asks Caleb how his son with Norma is doing. Hasn’t his ass been kicked enough already? Chick feels bad when he realizes Caleb just learned about his sister’s death. Caleb steps outside for some air. He knew Norma was being consumed by Norman, and he told her Norman is dangerous. He’s still reeling thinking about Norma. His beloved Norma. Right or wrong.

Norman’s back home after his date. He’s entering Mother-mode and goes into Norma’s closet to find something cute to wear. Caleb is right behind him in a taxi and smashes his way into the house, screaming for Norman. He knows Norman is responsible and wants Norman dead. Join the club, Caleb. He goes into the basement and finds Norma’s shrine. He stands there in shock. Norman comes up behind him and whacks him in the head. It’s not looking good for Caleb. It’s not like Norman can let him go.

Norman is full-Norma now. The dress, the blonde wig… the lipstick. And my, what bushy eyebrows you have, “Norma”!  Of course Chic is there, he’s always there. He stares at Norman with awe and disbelief. Norman says girlishly, “Well, now you know Chick, I’m still alive.”

I don’t think knowledge is power in White Pine Bay.

One thought on “Bates Motel Recap: “The Convergence of the Twain””

Back at the motel, Norman scans the registry book, searching for Jim Blackwell. He’s not registered. Norman looks through the...