The Bachelor is getting brutal as hometown dates approach. Some girls (Corinne) will stop at nothing. Thankfully, we have Canadia ambassador and The Bachelor scholar Andrée H. to analyze Corinne’s vagine. Take it away! — Elaine F. 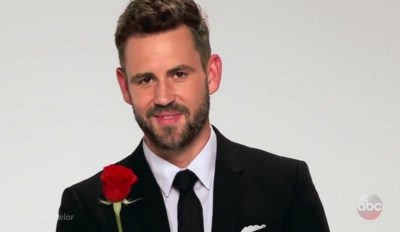 Andrée: Show opens up just jumping straight into the drama. Nick isn’t sure if he wants to stay, none of the girls know if Nick, is, in fact, feeling them, Corinne has some serious bedhead…here we go!

Elaine: Sigh, Nick’s man tears are not impressing me. Neither are the girls acting like The Bachelor season is going to wrap here and now. There are five girls I recognize: Raven, Rachel, Danielle M., Corinne, Vanessa and some girl whose name I never bothered to learn. Girl, bye. If I don’t know who you are by now, thy name is cannon fodder.

Andrée: It was all a trick! Nick wants to stay! What a shocker! On top of everything no rose ceremony! Today is a good day!

Elaine: What a tense nail-biter. I thought he was going to wander into the sea and ask Chris Harrison to take over Chris would be great at this because no matter what you did, he’d be enthused. “Wifey, these are the MOST TASTY scrambled eggs ever!” “Please tell me more about your day in minute detail., this is the MOST STIMULATING conversation ever!”

Andrée: I’m guessing Chris Harrison is chronically single because he has his hand’s free with Bachelorette hopefuls. Bimini looks gorgeous! And it’s really fun, apparently! I can’t believe that hometowns are next week. I really hope that we get to meet Corinne’s nanny. Vanessa gets the one-on-one date if she manages to stay alive with the killer looks Corinne is shooting her way.

Andrée: I am a little bored with Vanessa. All her conversations with Nick just feel too deep. It makes me wonder if they have much more of a connection than what they have showed us on screen. Watching them kiss in the water, it does feel very genuine.

Elaine: Vanessa and Nick seem natural together. She bores me, but I think  she’ll be “winner.” Or maybe Danielle M. The Bachelor usually goes for the bland girl. He passed over pretty, witty, fun Molly for Melissa, but then came to his senses at the MOST SHOCKING After the Final Rose and begged Molly for another chance. I loved it. They are still married. I love them. 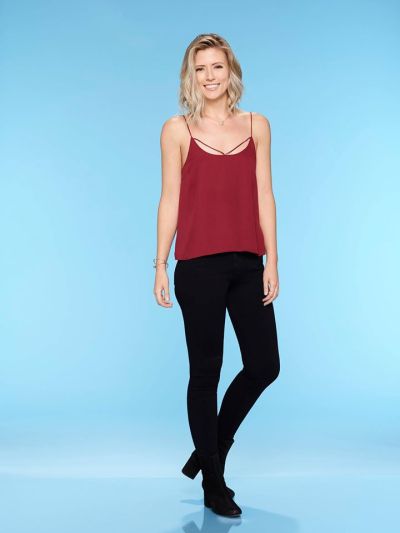 Andrée: I feel terrible for Vanessa. She said I love you and he responded basically with yeah “I felt fake love on here before too.”  Ouch.

Andrée: Poor li’l Corinne isn’t getting all of the attention on the group date. I’m trying to pay attention but I really just want to skip ahead to the part where she tries to sleep with him. I guess I’ll have to deal with watching them swim with sharks for now.

Elaine: Nick is tired of having to dump girls. Nick wants the shark to make the choice for him.” It’ll be the BLOODIEST group date ever.

Andrée: Watching Corinne chow down on that cheese is cracking me up. In all honesty though. if you put a huge plate of cheese in front of me I’d do the same.

Andrée: Good on Corinne for bringing up that she hasn’t had a one-on-one yet,  that’s kind of crazy being that next week is hometowns. Of course Raven, the one person whose scenes put me to sleep, gets the group date rose and first ticket to hometowns. Wishing I could fast forward to the sex scene!

Elaine: Corinne doesn’t need a one-on-one, she’s always on top of him. After she lured him into a bouncy house, what else does he need to know? They have to give Raven a hometown. In the pilot, she was standing in front of the sign, Pop. 8. This show loves that kind of thing. Her hair looks longer every week. Extensions?

Andrée: Now Nick is questioning his relationship with Danielle. He really is failing at this gig. He’s dumping another one? Wow.

Elaine: Welp, so much for my crystal ball. Danielle would be the MOST CLINICALLY DEPRESSED last girl standing. She’s too fragile for this show.

Andrée: “I’d live in a shack with no diamonds for Nick, I would.” Another wonderful Corinne quote.

Elaine: Let’s not get crazy, Corinne. You could never handle a shack

Elaine: Poor Corinne. Her platinum vagine was not genuine. It’s some silverplate vagine from QVC. Well, thanks for giving us a terrific new word: “vagine.”

Andrée: This is a true walk of shame.

Elaine: I have a theory about our little Corinne. When Corinne was about 19, she saw Courtney’s season and found a spirit guide. She talks hilarious trash in her ITMS, used the phrase “winning,” which she got from Courtney, who got it from Charlie Sheen when it was relevant. She makes blatant seduction attempts. She doesn’t have Courtney’s game. My girl Courtney initiated secret skinny-dipping with Ben. And based on her memoir, there was penetration. Sadly, the waves kept knocking them over, so he only got the tip in. But it made enough of an impression to get that final rose. Maybe in a couple of years, Corinne will have stepped up her temptress game.

Andrée: The ocean was the smart part. That way Ben could pretend like nothing happened. Corinne went in too direct, all Nick style. This date with Rachel feels really fun and relaxed.

Elaine:  Nick is choosing good dates. The outings are fun and something you’d actually do with your man. I think some of the girls think their “life” with The Bachelor is going to be all helicopter rides and private concerts.

Andrée: They are really making it look like Corinne is going home so I am just going to hope that that is The Bachelor just being assholes. Oh yay, it’s Christina, thank God.

Andrée: If someone stacked cheese on my head while I was sleeping, I would shred their rose ceremony dresses to pieces.

One thought on “The Bachelor Recap: Nick’s season Ep. 7”

Nick is clearly troubled by his on-again-off-again feelings for these contestants. What is he worried about, exactly?