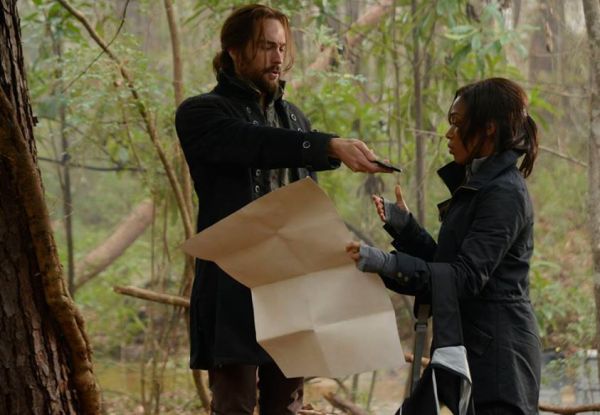 Poor Ichabod Crane, there are two women in his life: His wife Katrina, who is trapped in Purgatory and his totes platonic, almost like a sister to him, buddy partner, Lieutenant Abbie Mills, to whom he can’t stop giving longing glances. Anywhoo, the big bad, Moloch, has warned that he’s going to take Abbie’s soul—and Ichabod is going to be the one to give it to him.  Let’s go!

Abbie’s at home. Wait, what? The only time I remember seeing her at home was that brief scene in Episode Three. Full disclosure: This is not my favorite episode so I guess I put it out of my mind. Abbie’s place looks roomy. There is an open kitchen, marble counter tops. She seems to favor neutrals—and mayonnaise judging by that jar on the counter. My OCD side thinks that jar belongs in the refrigerator, but maybe she hasn’t opened it yet so it’s safe to eat. Don’t play around with food poisoning. In any case, she has a visitor, the undead Andy Brooks. It goes like this:

Abbie: Hi. What are you doing here?

Andy: Give Washington’s Bible to Moloch and everything will be cool. He needs it to find a map. You’ll get to join the organization and everything. Besides, you can’t trust Crane. I’m also here to remind you that “no one loves you like I do.”

Abbie: Look, we’re better off as friends. I’m gonna handcuff you now and call Captain Irving, which is an iffy maneuver since you are undead, but whatevs.

At the archives, Ichabod wants an upgraded phone. That damn sexy hobo doesn’t have a job, who is going to pay for that? Abbie should buy him a pre-paid burner phone. iPhones are for the employed, Ichabod. In any case, Lieutenant Doe Eyes tells Ichabod about the map. She notes that Andy repeated Moloch’s prophecy: Crane will betray her by letting Moloch take her soul. Abbie says she doesn’t believe it, but Crane detects a lack of certainty. Bible, prophecy, blah, blah, plot. Ichabod has cracked the code or Washington’s secret message and Abbie reads it aloud: “December 18th, 1799. Instructions from President George Washington for Captain Ichabod Crane, esquire. Dear sir, if you’re reading this now, then the war has resumed and your destiny to bear witness made man.” The cutest thing in the world happens, Ichabod is so pleased with the chance to impress Abbie, he’s giving her one of those sidelong glances with a smile like: “See? told you I was a big deal!” We later find out Crane’s former flame is Betsy Ross. He’s a name-dropper, that one.

Abbie: When I call, I need you to pick up. I

Ichabod: For starters,  believe I would have an easier time navigating my device were it not such a… how shall I say this… An antiquated piece of rubbish.

Abbie: What’s wrong with your phone?

Ichabod: It’s obsolete. I’m not blaming you, Lieutenant. It’s these telecommunication companies, overwhelming the populace with their ostentatious advertisements. They’re coercing the consumer into purchasing countless “system updates.” It’s an abuse of capitalism and certainly not the vision behind our… Laissez-faire market.

Abbie: Hmm. And yet… You want a new one?

Ichabod: You’ve got one.

Good news: This map holds the key to entering Purgatory so they can go in and get Katrina. Bad news: The map holds the key to exiting Purgatory so a lot of demons can get out.  For the first time, Team Witness exhibits a rift. Abbie thinks that maybe the map should not be found. She is concerned that Crane’s focus on rescuing Katrina might jeopardize their most important task, which is halting the Apocalypse. Ichabod is wounded that she believes he would betray her. Maybe he has self-doubt.

Since undead Officer Andy Brooks isn’t getting anywhere with Abbie, he’s committing himself to his career as Moloch’s minion. Moloch laughs at Andy because Moloch is a jerk. Andy gets a chance to prove his loyalty. He’s transformed into a monstrous creature covered in black veins and the requisite black eyes. His head also takes on a weird shape. Doesn’t seem necessary to make Andy hideous, but that’s how Moloch rolls.

Team Witness and their new ally Henry Parrish head to Bannerman Island, Washington’s secret burial place. When Ichabod is out of earshot, Abbie asks Henry about Biblical prophecy, he confirms that yes, one Witness will turn on the other. When they get to the crypt in which Washington is buried, Andy is there in his demon form. Clearly Andy’s love for her is stronger than his devotion to Moloch. Andy warns Abbie to destroy the map because Moloch needs it to win the war. Poor Andy begs her to “release” him, and she obliges with a stake through his head. Andy is undead, so it doesn’t work all that well, he lunges again but since the area is booby-trapped he is seemingly put out of his misery in the ensuing explosion.

Captain Irving’s life is going sideways. Somebody has to answer for the deaths of Reverend Boland and Detective Devon Jones. Irving’s friend Tom presses him to explain the murders at the safehouse and isn’t buying the captain’s claim that “Evil” is to blame. Irving’s daughter, Macey, falls under suspicion and is brought in for DNA sampling. The idea that two men had their necks broken by a 13-year-old in a wheelchair is ludicrous, but not as ludicrous as the explanation that she was possessed by an evil spirit. Frank falsely confesses to spare his daughter.

Once they have the map, Crane reluctantly agrees that it should be destroyed to prevent it from falling into the wrong hands. Crane torches it and tells Abbie: “I choose to forge my fate with you She promises to help him find another way to free Katrina. Henry appears to be displeased.

Cliffhanger: Alone at Corbin’s cabin, Ichabod uses his eidetic memory to draw a copy of the map.

Them evil forces are busy. Moloch put Ichabod Crane on notice, the beast warned that he will take Lieutenant Abbie...