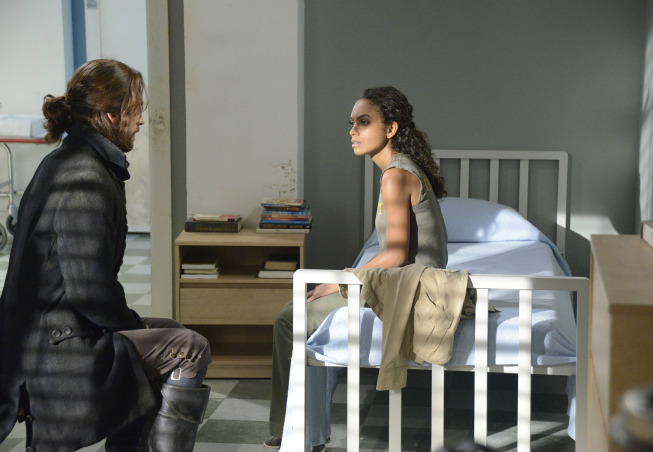 I knew it, I just knew it! Lieutenant Grace Abigail Mills has an apartment! If nothing else, she has a bedroom. During this re-watch, I found the evidence. She has a bed, an end table, pillows, an alarm clock, draperies, all things one would expect to find in a home. Her accommodations aren’t as light and airy as the rooms at Tarrytown Psychiatric, but it’s a suitable apartment. We never see that set again, just like we never see Abbie in uniform again after the second episode, but it’s proof that she does not live out of her car. The heroine of the show is not a hobo! Her partner Ichabod Crane is still a hobo, but a damn sexy one. Let’s go!

We get an exceptionally creepy creature of the week, The Sandman. He does not care for liars who neglect to help someone in need and tends to go overboard with the retribution. Abbie is called to the scene to help rescue Dr. Maura Vega, who is standing on a ledge. After admitting that she was dishonest, the guilt-ridden psychiatrist, who treated Abbie’s sister,  Jenny, jumps. Her last words are “We have it coming.” Not to be indelicate, but if that apartment is vacant, maybe Abbie should consult a realtor. Crane was ensconced in a motel in the first episode, so I don’t know where he lives. When Mr. and Mrs. TV Recaps feel fancy we go to the Hampton Inn. Nothing says luxury like a DIY waffle machine in the lobby. 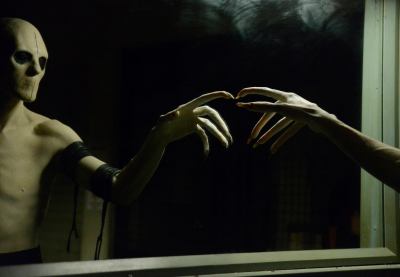 Since Jenny’s name was invoked, Ichabod insists on a visit to Tarrytown Psychiatric. The Exposition Fairy tells us that Jenny’s latest institutionalization is because she stole $4,000 worth of survivalist gear in preparation for the End of Days and the Mills sisters haven’t seen each other in five years. Ichabod quite rightly takes a dim view of the Sleepy Hollow justice system. Abbie is not on the visitor list and  Jenny refuses to see her. Jenny does accept a visit from Ichabod who is ushered into her lavish hospital room, which is much bigger than your average New York City apartment. In fact, history will show that Jenny had some of the best living arrangements on this show. In any case, we learn important information.

Abbie needs to stay awake so the Sandman can’t kill her. Ichabod fetches her an energy drink.

Ichabod: I requested coffee from the charwoman in the entrance hall, but she said you’re particular to this beverage.

The Sandman strikes again, taking out Mr. Gillespie, the man who found the lost girls. Gillespie also saw the beast, but kept mum because being hailed as a local hero is better than being known as a loon. He shoots himself. Lieutenant Mills figures out that the Sandman is coming for her. The demon strikes when his targets are sleeping so Lieutenant Mills accepts if she nods off,the Sandman will force her to take her own life. Crane says this calls for a shaman. Fortunately, Abbie knows where to find one and they visit Seamus Duncan, the owner of Geronimotors, and arguably the show’s greatest guest character. (“You guys into time travel? I got a tricked-out DeLorean in mint condition.”) It goes like this:

Ichabod: Hi, you are Native American, surely you can come up with some sort of potion.

Ichabod: Abbie is so pretty, gaze into her doe eyes.

Seamus: Okay, come with me. Abbie, you’ll need to drink this special tea so you can enter a dream state and fight the demon.

Seamus: You’ll need to take off your top, fortunately, you have on a tasteful sports bra.

Ichabod: I’ll help, so I can take off my shirt and lie next to Abbie. Since she’s wearing a bra I can probably just open my shirt, but I’m going to crank up the sexual tension by taking it off.

The Shipping Fairy: It’s only the third episode, don’t you have a wife uploaded to the cloud or something?

The duo best the Sandman and take some time to adorable all over the place.