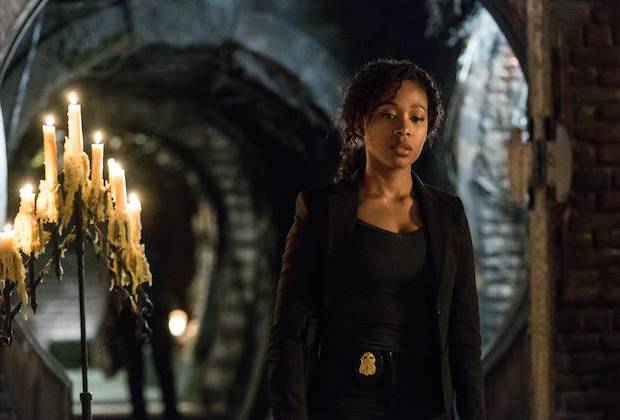 Agent Grace Abigail Mills and Ichabod Crane are fighting, the Hidden One, a cranky god who hates humanity and harbors a severe dislike for the Witnesses. The battle to defeat the Hidden One led to Abbie stranded in a desolate dimension. It was a different time zone: ten months in that dimension but just a few weeks in our reality. Abbie is secretly obsessed with a mysterious symbol and her head is not fully in the Witnessing game.

Jenny and Crane have a hush-hush conversation about Abbie. They know something is amiss, they just don’t know that Abbie may be crazy now and she’s sneaking off to the shed, we never knew existed, to gaze at a huge reproduction on the wall or doodle in her journal. Crane voices the importance that they “remain cognizant of her needs.” That phrasing is loaded with subtext, is it not? What do you think? Am I reading too much into this? Tell me. I know, I think the word “turnip” is loaded with subtext and means they are in love.

Those needs include keeping Crane in the country but his citizenship application has been denied, he was too busy saving Abbie from a remote dimension to follow through. It’s unclear whether she knows about this snafu though.

Later on.  there’s a cute Joenny subplot. Jenny’s beat-up trailer is flooded and Joe impulsively surprises her with a shiny, new, deluxe top-op-the-line trailer. Jenny finds this presumptuous and chides her boyfriend so he has to sheepishly return the old one. His heart was in the heart place. Show of hands: would you have kept it?
The monster of the week is the Jersey Devil, an animalistic creature and one of the Hidden One’s minions. Flashback time: Doctor Leeds, one of Benjamin Franklin’s rivals, tried and failed to poach Crane. The brilliant but shady alchemist conducted unethical experiments which resulted in Leeds transforming himself into a combo platter of dangerous animals.


Ichabod: There have been many reported sightings of this Jersey Devil, dating back to 1777. And many different descriptions, from flying biped with hooves…

Dr. Leeds is an engaging villain. He’s witty and reminiscent of some of Buffy the Vampire Slayer’s erudite baddies such as The Master. We’re skipping all that because there are significant developments for Team Witness. Since Dr. Leeds is cool, he’ll get his very own character bio when they’re updated during the season break. You’re welcome.

Abbie: Hmm, the item that is conveniently placed on this table features the same mysterious symbol that has been haunting me.
Ichabod: I’m trying to give some exposition here. What are you doing with that thing? If it belonged to Dr. Leeds, it’s evil.
Abbie: Okay, you pore over books and flail your fingers in the air and name-drop as you work yourself into every event that ever happened in the 18th century. I’m just going to stand around staring at this thing.
Ichabod: Am I not supposed to notice that you’ve been acting kind of squirrely lately?

Blah, blah, blah plot. The Hidden One was always a jerk. He was exiled to the catacombs. Pandora, a human, worshiped him and something something. Pandora is my girl, and I love it when she’s in Litte Miss Crazy Pants mode but fast-forward.

Leeds shows up to trash-talk Ichabod and fanboy over the Hiden One. He tries to kill Crane with his poisonous scorpion tail and then punches Abbie, sending her flying. It goes like this:

Crane: Nobody touches my boo. Was that guy flirting with you? I will kill him.
Abbie: I see that paralytic venom has incapacitated you so he’s getting away. Fortunately, this lab has enough hocus-pocus to remedy that. The potions and powders aren’t labeled properly and are spread out all over the place so this is improbable, but let’s just go with it.
Ichabod: Okay, I’ll talk you through creating an antidote. Thank goodness I know everything.
Abbie:  Whoopsy, I spilled it. There is that symbol again. I’ll leave you hanging so I can stare at it some more.
Ichabod: Um.
Abbie: (Silence)
Ichabod: Abbie?
The Audience: He called her Abbie! Swoon!
Abbie: Okay, I’ve snapped out of it. I’ll whip up another batch and cradle you in my arms. I’m still going to grab that doodad with the symbol while I’m holding you. I will put my face so close to you that it will look like I’m kissing your forehead.
Ichabod: I’ve probably recovered already but I love this cuddling so I’ll milk it for a little while. We can spoon too if you’d like. Just putting it out there.

So Crane knows this thingamajig Abbie is clutching is a problem but she explains that when she saw it on the temple wall in the catacombs, it gave her peace. I guess it’s like a comforting religious symbol for Abbie but is is the second consecutive time that she nearly let Crane die. Obviously, they kill the Jersey Devil, but not before he helps the Hidden One with something something plot hourglass.

Chez Witness, Abbie and Ichabbie have a heart-to-heart. She realizes the symbol has way too much power over her and tearfully asks for Crane’s help. Agent Mills has mostly kept her feelings bottled up since the pilot. Nobody wants to see Abbie damseling about, but in my opinion, the “strong black woman” trope is just is bad. This character development allows Abbie the freedom of vulnerability and it also gives Crane a chance to flex his romantic hero muscle. This is a big effin’ deal. “Turnip.”

Cliffhanger: The Hidden One’s power is getting stronger and “The new world begins now.” Gulp.

Apparently, Abbie now keeps a journal as therapy to cope with her time stranded in that other realm. She claims...