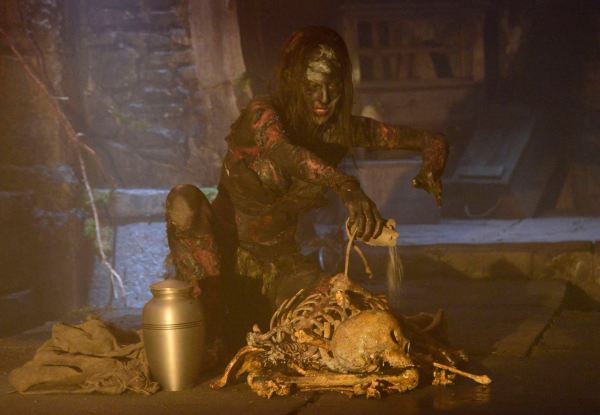 Damn sexy time traveler Ichabod Crane and doe-eyed Lieutenant Abbie Mills just met. She’s already leaving him little notes and he is all up in her personal business. That’s how life is when you’re tasked with preventing the Apocalypse, it’s a bonding experience. Let’s go!

Uh-oh, Ichabod is in trouble! The Four Horsemen are chasing him through the woods. Katrina is there to whisper a vague warning about Serilda, the monster of the week. Psych! It was all a dream. You know what is more helpful than Katrina’s cryptic whispers? Post-it Notes. When Ichabod awakens in his motel room, he finds lots of messages instructing him how to work the lights, shower, coffee machine etcetera. Abbie is so thoughtful. Honestly, if Katrina would get herself some Post-It notes from the Purgatory convenience store, it would be easier on everyone.

Lieutenant Mills is having a crummy day, her new boss, Captain Frank Irving hassles her. It goes like this:

Abbie: So, it’s time to track down that Headless Horseman. It’s a good thing that my unbelievable story has been corroborated by other cops.

Captain Irving: Those extras recanted. Your account is absurd.

Abbie: What about the fact that Officer Andy Brooks’ head was pushed back like a Pez Dispenser while in police custody?

Captain Irving: Stop making sense. You can investigate with that damn sexy hobo, though. I’ll grumble. You’ll look at me with those doe eyes and I’ll do whatever you want.

Abbie: Thanks for the mixed messages.

After picking up Ichabod and introducing him to the food of the gods known as donut holes, Abbie goes to the service for her fallen mentor, Sheriff August Corbin. It goes like this:

Ichabod: I will keep a respectful distance, but keep my eyes on you. I hope maybe you’ll glance up and spot my long hair flying in the breeze, this is gaze foreplay. The lighting department bathed in a golden light, just to emphasize the damn sexy.

The Audience: I thought you were supposed to be looking at Katrina’s headstone even though you know she’s not buried there.

Later on, Abbie exposits about her father/daughter relationship with Corbin. It goes like:

Abbie:I used to be a delinquent.

Ichabod:  That surprises me, Leftenant, do all black TV characters—even ones as refreshing as you—have crime in their backstory?

Abbie: Yeah, but I only turned to drugs and crime because I saw a demon. Corbin took me to a diner, he said if I straightened up before his ice cream melted, he’d help me go straight. You would not believe my flashback hair. I loved him,  he’d surely notice that Officer Andy Brooks’ body is missing from the morgue. 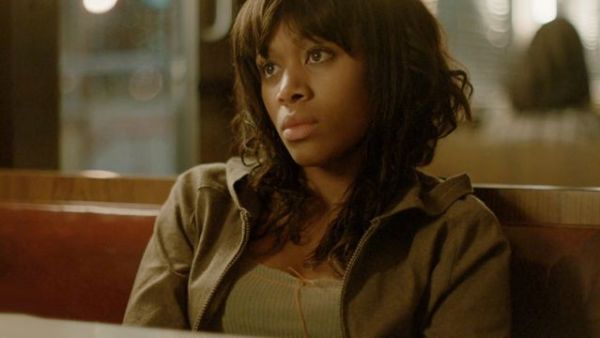 The blurry man has re-hired Andy as a minion and the undead officer is sent to do the bidding of Serilda. Working for the demon sucks, he’s moody, abusive and doesn’t offer a good medical plan. In any case, Serilda was burned at the stake which is annoying because that wasn’t really a thing in North America, but let’s move on. To be made whole again, Serilda, who is a bit on the crispy side, is seeking the descendants of the men who condemned her, so she can turn them to ash and be restored. 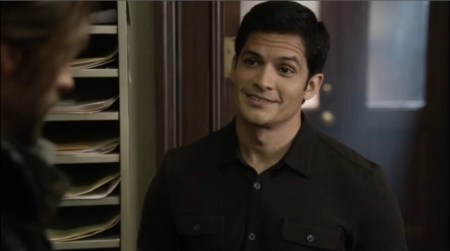 While Abbie is off doing police stuff, Ichabod is standing around looking at overhead lights when Detective Luke Morales struts in. It goes like this:

Luke: Hi, I’m a damn sexy detective. I know who you are, you’re that damn sexy hobo who has been following Abbie around. I saw her first.

Ichabod: Are we to be rivals? This scene implies that I’ll be your nemesis and you will spend a lot of time investigating me because you’re a detective and all.

Luke: That’s right, I’ll be your worst nightmare for about six episodes and by that I mean, I’ll show up now and again for a few scenes before getting the Chuck Cunningham treatment.

Ichabod: Good to know. I must now ask Abbie lots of nosy questions about the two of you. Bye Felicia.

Ichabod: Facial expressions have changed little, if at all, over the centuries. Were you and Luke formerly betrothed?

Abbie: He’s my ex. We weren’t betrothed. There was no betrothing.

Ichabod: What was the impetus of your disbandment?

Abbie: We broke up when I was leaving for the FBI.

Ichabod: But you didn’t leave.

Ichabod: Then theoretically you could rekindle the relationship.

Abbie: I will literally pay you to stop talking.

Ichabod: I would happily accept  because I am in need of currency.

Sheriff Corbin’s occult files would be useful, but they are locked up at the armory across the street and Lieutenant Mills doesn’t have access. Crane solves the problem with an axe and secret entrance. That Ichabod likes to show off for Abbie. He’s already boasted about his eidetic memory in this episode. After claiming the lives of a couple of townsfolk, Serilda goes underground to find her bones or something, but she’s thwarted by Team Witness. In terms of villainy, Sarilda is kind of on the meh side, but there are far more menacing baddies ahead.

Cliffhanger: Sherriff August Corbin appears to Abbie in a vision. He offers some fatherly advice and tells her “Don’t be afraid of Number 49, that’s where you’ll find your not alone.” In Room 49 at Tarrytown Psychiatric Abbie’s sister, Jenny Mills, serves up some Sarah Connor realness secretly spitting out psych meds and toning those muscles. When Jenny’s back is turned, The horned beast is behind her for an instant.

Doe-eyed Lieutenant Abbie Mills meets a damn sexy hobo. It's the first episode, and the episode is full of firsts,...