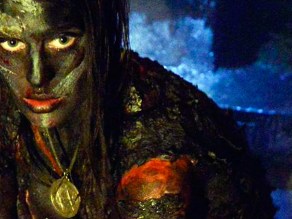 Backstory: The high priestess of a dark coven who was believed to be allied with the Redcoats. Ichabod says that on the night of a blood moon,  near a camp in Albany, there were bodies everywhere that had been reduced to ash. and there were many more murders. Her powers were weakened by Katrina’s benevolent coven, the Sisterhood of the Radiant Heart. She was captured and burned at the stake. The magistrate who sentenced her was named Robert Daniel Furth.

Recent Developments: Assisted by the undead Officer Andy Brooks, she gathered the ashes of the descendants of her executioners and her buried bones to reclaim her flesh and resurrect herself.

Distinguishing Features: Burnt to a crisp, she speaks Romani-Greek.

Famous Last Words at the Stake: “By the turn of the Blood Moon, the ashes of your ancestry will be mine. Your flesh will be my flesh. I will live again.”

One thought on “Serilda of Abaddon Bio”

Backstory: He kills those who have turned their back on a neighbor.