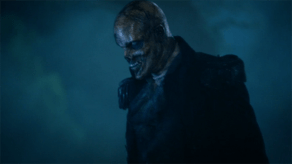 Backstory: Obsessed with death, Benjamin Franklin-stein patched together the body parts of fallen soldiers as an equal to the Horseman. To counter the Horseman’s assault, the founding father worked with Katrina‘s coven, The Sisters of the Radiant Heart, to create the creature, a body powerful enough to contain Death’s spirit. Franklin and the coven were never able to raise the Kindred because they didn’t have a crucial element, one of the Horseman’s body parts.

Recent Developments: Ichabod set out to free his wife from the clutches of the Horseman, who was holding her captive. Abbie and Jenny were against this harebrained scheme, but Ichabod persuaded them to animate the monster. Crane and Lieutenant Mills found out from Captain Irving that the Horseman’s skull was stashed in a vault at Sleepy Hollow Savings and Loan. With the skull in their possession, the Witnesses raised Franklin’s creature, who successfully fought the Horsemen of Death and War. In the meantime, Crane got to Katrina.

Well, that Backfired: Katrina insisted on staying with the Horseman so she could act as a mole. The Kindred galloped off with the skull so Abbie and Ichabod let loose another supernatural creature in Sleepy Hollow and they don’t know what happened to the Horseman’s head.

The man-beast's transformation is triggered by blood and the creature can not return to human form until it has fed...