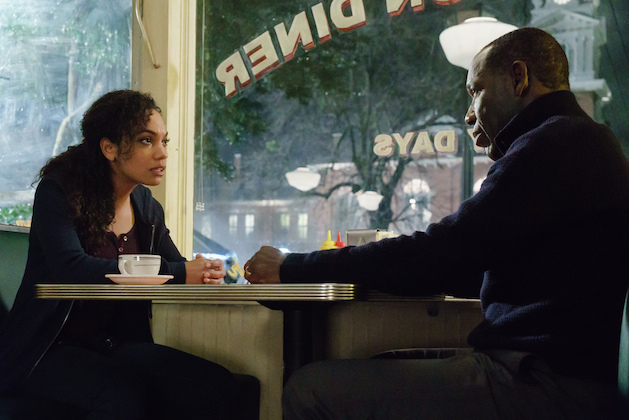 FBI Agent Grace Abigail Mills spent ten months in a desolate dimension. Back in Sleepy Hollow only a few weeks had passed and Abbie’s , totally platonic buddy, Ichabod Crane, was determined to bring her back to their love nest, Chez Mills. He succeeded but Abbie is still dealing with the aftermath of her ordeal and is haunted by a mysterious symbol. Let’s go!

Ichabod: Welcome home, Honey. While you were at work, I made this romantic Italian dinner with wine, candles and flowers. A couple of episodes ago, I didn’t know how to cook frozen lasagna but forget about all that. Surely, I’ve made my feelings clear. We are not totally platonic buddies. You see that, right?

Abbie: “I don’t need to be pampered, Crane.”

The Audience: What? You do need pampering! Shut up, Abbie. Just sit down and enjoy this elaborate dinner.

Abbie: I think I’ll go off by myself to the shooting range.

Ichabod and the Audience: Sigh.

Apparently, Abbie now keeps a journal as therapy to cope with her time stranded in that other realm. She claims it’s a boring read, which it probably is since she’d rather spend time by herself at the shooting range then at home being pampered but let’s just pretend that she practices writing her name as “Mrs. Ichabod Crane” and doodles hearts. Crane probably sneaks peeks at it so that he can see if she mentioned anything about him.

Ezra, Abbie and Jenny’s dad, has some explaining to do, so he meets with Jenny at a diner. Ezra admits that he couldn’t deal with her mother’s illness and took off, drank too much and then joined the navy for medical benefits. Okay, so Ezra served three consecutive tours and got himself together, are we to assume that he didn’t find out that his wife had died and his daughters were in foster care? What about those medical benefits? He just wants to let his daughters know none of this was their fault. Of course it wasn’t. What took Ezra so long to get in touch with them? Papa Mills is shady.

At the FBI gun range, Agent Daniel Reynolds just happens to be there at 8 o’clock at night when Abbie shows up. Yeah, right. He wants to move past that blow up they had over the Atticus Nevins case before Abbie quit. Presumably, they would have hashed this out when Abbie returned to the bureau, but Danny probably wants to kiss and make up. Watch it, Daniel. Crane will kill you and make it look like an accident. Daniel suggests going to the pancake house but Agent Doe Eyes declines. That’s good. If she went to the pancake house instead of having dinner at home with that damn sexy hobo, there would have been some furious Tweeting.

Remember how it looked like Pandora killed Nevins? She didn’t. He’s still around, but all beat up and claims to be in fear for his life. He contacts Abbie and she hauls him into the hexed monster-proof cell where he is interrogated by Jenny and Joe while Abbie and Ichabod watch. Nevins, who looks like he was attacked by an animal, supposedly has important info about this beastly creature, The Ghoul. If Team Witness accepts his help, he wants assistance crossing the border. Nevins is not talking fast enough so Crane steps in and tempts Nevins with tasty food. Unlike some people we can think of, Nevins doesn’t reject the dinner. They need some of Sheriff Corbin’s files, so Nevins is transferred to the archives.

I don’t care about this monster of the week case. Blah, blah, blah, plot. The only thing worthy of mention is that there is a Sheriff Corbin connection. Let’s just cut to the chase so we can get back to relationships.

That symbol that Abbie saw is still bedeviling her, she envisions it while she’s in an FBI meeting. During the inevitable battle with The Ghoul, Abbie waves her gun in the air but is slow to start shooting when the monster attacks Crane. It goes like this:

Ichabod: Hey, Leftenant, maybe you should shoot this thing like you shoot everything else.

Abbie: Not now, I’m having a flashback about the symbol and the catacombs. Maybe this symbol is controlling me or something.

Ichabod: Whew! I’m going to gaze at you in a manner that implies I’m freaked out by what just happened

Abbie: I’ll do the same.

Abbie does go to see Papa Mills. It goes like this:

Abbie: Were there any signs that Mom was crazy?

The Audience: Yes, she shoved away romantic dinners.

Ezra: She started having hallucinations, but then she’d be fine. It was confusing. She pushed me away and I thought maybe she’d be better off without me. I left my two young daughters with a possibly crazy lady.

Abbie: Maybe all the Mills women end up “crazy and alone.”

The Audience: Except for Grace Dixon. And Jenny is cuddling up with Joe Corbin right now so knock it off, go home to Crane, who is obviously in love with you. Gah!

Daniel is still up to something. He has a cryptic phone conversation with the FBI Director who alludes to Abbie’s mental state but Danny defends her. The director also instructs Reynolds to downgrade the search for Nevins. After the conversation, we find out that Nevins was working with the director. Nevins hands over Corbin’s files which show the coordinates for the “nine sacred sites.” Crime doesn’t pay, the FBI director shoots Nevins.

At home, master chef Crane can’t make a decent sandwich for himself.

Abbie: Bologna on whole wheat? That is the Charlie Brown of sandwiches. Ichabod: The bald boy with awful luck. “Good grief.”

Abbie says she’ll make sandwiches. Yes, Abbie. Do that, it’s much better than a lavish dinner. Abbie admits that she’s having a hard time.  Determined to up the swoon factor, Crane says: “Just as you were by my side when I returned to Sleepy Hollow, so I shall be by yours.” Abbie wants a beer and tells Crane to go ahead to Mabie’s Tavern where Jenny bartends. Abbie says she’ll “pay for the next round.” Does that mean, the damn sexy hobo will buy a round? Do we know where his money comes from? Did I miss that scene? No matter, we find out that Abbie has a huge backyard shed. If it was cleaned up, Crane could sleep out there, but if course he doesn’t because then it would be harder for the two of them to unresolved sexual tension all over each other.

Cliffhanger:  Apparently, Abbie recreated a huge image of the symbol on the wall. And that journal is filled with crazy doodles of the symbol. She then positions her arms over her chest in a way that resembles the symbol and says: “You saved me. I’m yours.” Gulp.